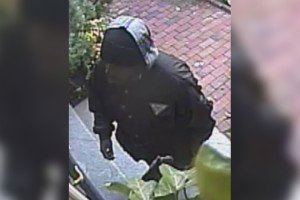 Police are seeking this suspect in connection with a home invasion that occurred in the city's Society Hill neighborhood on Oct. 25.

Philadelphia police are seeking the public's help in identifying a suspect who hid in a home and robbed an elderly man Sunday in broad daylight.

The man also tried to steal the victim's car, police said, but couldn't get the car to shift into gear and instead fled on foot.

According to police, the incident occurred Sunday at 5:50 p.m. when the 84-year-old victim returned to his home on the 200 block of Delancey St. in Society Hill.

When the homeowner stepped into the house, law enforcement officials said he noticed an African-American man hiding behind a curtain.

Police said when the elderly victim confronted the hiding suspect, the wanted man stepped out and told him, “I was told, you have guns and a lot of cash.”

Police said the suspect then demanded guns from the victim and was directed toward two shotguns under the couch.

The suspect wrapped the guns in a blanket and forced the elderly man to take the shotguns outside to the victim's car, police said. But, when the suspect attempted to flee in the vehicle, he was unable to shift the transmission, law enforcement officials said.

The suspect then fled from the vehicle and was last seen heading east on Pine Street toward 2nd Street, and police said he left the shotguns behind.

Police describe the suspect as a black male, about 40 years old, and about 5 feet 9 inches tall. He was wearing a black jacket, black hat, striped hooded sweatshirt, black pants and brown boots.