'The Legend of Zelda: Symphony of the Goddesses' performs at Kimmel Center

At last, a symphony for kids 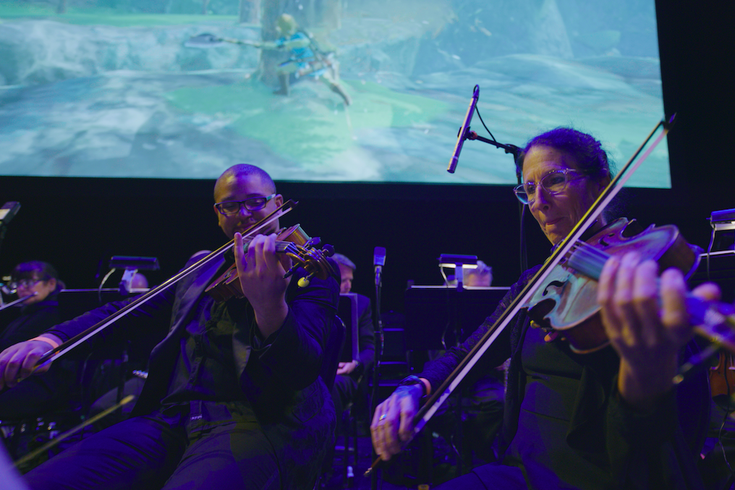 courtesy of The Kimmel Center/for PhillyVoice

Now touring across the world, "Symphony of the Goddesses" brings Zelda fans and symphony goers alike an entirely new, multimedia experience presenting more than 30 years of music from "The Legend of Zelda" franchise.

"The Legend of Zelda: Symphony of the Goddesses" debuted at the Kimmel Center last night.

In short: It’s a 90-piece orchestra and choir + gameplay footage from the Zelda video game series on a giant screen.

The 2017 program has been completely updated, including new music from "Zelda: Breath of the Wild" (the newest franchise iteration on Nintendo Switch), Skyward Sword and more.

PhillyVoice spoke with the show's producer, Jason Michael Paul, about this unique entertainment event, which now tours all over the world.

First, Paul elaborated on how such a collision of creative worlds came to be.

"Well, I had been working on featuring music from Nintendo games like "Super Mario Bros." and, of course, Zelda. So, I invited the composer to a premiere concert I was having in Chicago. That was in 2006 - and he graciously accepted," said Paul.

"That was also when I began a relationship with Nintendo – producing and performing music from their catalog.

"Fast forward to 2010. It's the 25th anniversary of 'Legend of Zelda,' where they asked me to produce and perform a show with the music of 'The Legend of Zelda' for shows in Los Angeles and London," he continued.

"They also asked me to record a CD. The success of those shows launched 'The Legend of Zelda' tour, and we've been going ever since."

As for those who feel that video game music and graphics does not fit the highbrow world of the philharmonic, Paul has a ready response.

"Well, the goal was always to create something that was relevant and basically reinvigorate the dying audience of the philharmonic world," he stated.

"So, with a show like this, it's a good way to introduce a younger audience to a show that is more relevant to them. Brahms and Beethoven, those shows are not really selling for 15-year olds, you know? But with this kind of music, I try to perform it in such a way, to kind of open their horizons so they will want to see another orchestra in these wonderful halls."