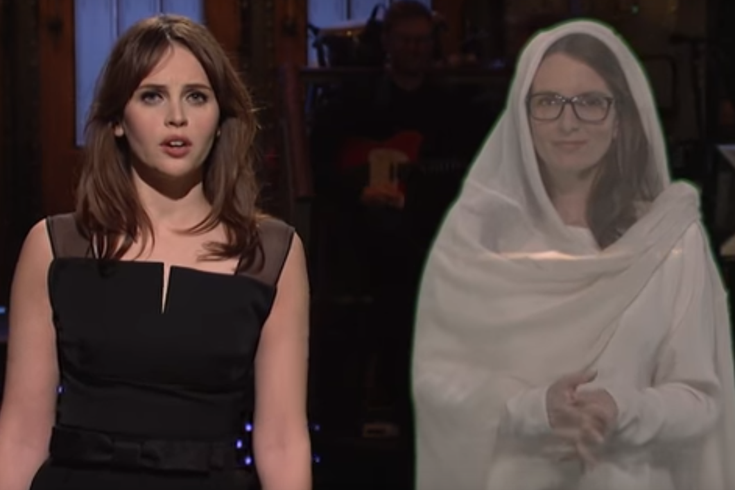 The "Saturday Night Live" cast and crew returned from the winter break this week and guest host Felicity Jones needed some help from a familiar face to get the show started.

The Jan. 14 episode marked the first time Jones, who portrays Jyn Erso in "Rogue One: A Star Wars Story," has appeared on the show. Who better to help prepare someone to host than Upper Darby-native Tina Fey?

During Jones' monologue, Fey appeared as a hologram that was heavily inspired by the Princess Leia character played by Carrie Fisher, who passed away on Dec. 27 at the age of 60. Fey was decked out in a white robe but quickly deflected attention away from the possible link to the iconic character when Jones asked her if she was a Star Wars princess.

"No, I just bought this at Eileen Fisher, they have amazing deals after the holidays," Fey noted before handing out advice.

After Jones admitted feeling nervous about her hosting duties, Fey assured her she could handle it. "All you need to do is go out there and do your best. Don't worry about what the reviews say," Fey said.

"Does this show get reviewed?" Jones asked.

"Yes. Way too much. Also, no matter how it goes, the President of the United States is going to say it is sad and overrated...Yea, the president. It's fine, no one cares," Fey said about Donald Trump, who surprisingly has yet to publicly comment on the show as he usually does on Twitter.

This wasn't Fey's first surprise guest appearance on the show this season. Back in October, the "SNL" veteran returned with Jimmy Fallon to spoof undecided suburban Philadelphia voters sharing their thoughts on the election and warning about drunk Mummers on New Year's Day in Philadelphia.