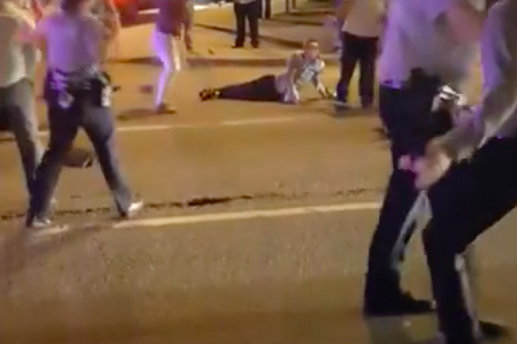 A fight broke outside Yards Brewery on Delaware Avenue.

There are many things that couples worry about going wrong leading up to their wedding days, like rain, cold feet and red wine spilling on a white dress.

What may not cross many minds, though, but apparently has happened to at least one set of newlyweds after their June 4 wedding reception at Yards Brewing Co. on Delaware Avenue in Philadelphia, is a massive brawl.

Based on video taken by a witness and shared by SpiritNews.org, the fight took place outside of the brewery spilling into traffic and drawing police to the scene. In the video, you can see people dressed in fancy clothes – presumably wedding guests – throwing punches.

SpiritNews.org also obtained a police report of the incident, which it said states that a 36-year-old male complainant was at his cousin’s wedding when someone asked him, “What are you staring at?” and then punched him. It also notes that two parties had previously been arguing inside the venue, SpiritNews.org added.

At least one person involved in the fight briefly lost consciousness and the complainant suffered a fractured jaw, the report states, but no one was arrested.

WARNING: This video includes language and violence that some viewers may find offensive.