Rhythm lives on at ninth annual event at Festival Pier 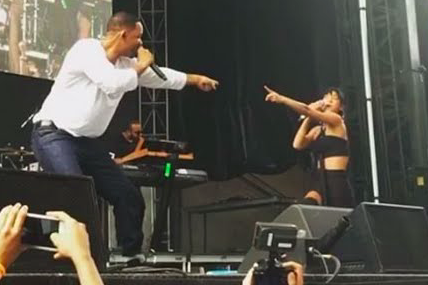 Will and Willow Smith perform "Summertime" at Ninth Annual Roots Picnic on June 4, 2016 at Festival Pier.

For nearly a decade now, Philadelphia has been honored to kick off the summer season in style courtesy of local hip-hop legends The Roots. The annual picnic at Festival Pier, a perfect collection of emerging talent and throwback prestige, was again a triumphant success on Saturday — with a cameo from none other than West Philadelphia royalty Will Smith.

In the midst of a set by 15-year-old Willow Smith, who released her debut album "Ardipithicus" last December, the charismatic hair whipper called out pops and Jazzy Jeff to regale the crowd with the 1991 classic "Summertime," originally released on "Homebase."

The rest of the night was marked by spirited performances from Blood Orange, Leon Bridges, DMX, and Usher, whose usually suave set owned the Picnic with instrumental and lyrical backing from The Roots crew, Lil Jon and Yuna. The event's only hiccup was the technically doomed and curtailed set of Future, which upset a lot of people until The Roots made up for it by playing more themselves.

Here are some sights and reactions from the show.

Still tired from the #RootsPicnic, still angry Future left, still going to buy my tickets for next year. 🔥🔥🔥

When you have all access at the roots picnic pic.twitter.com/wZvm0BrUIE

I think #MuhammadAli and @questlove may have been related... pic.twitter.com/NgDlnC8fm8

Usher rocked the stage in a Muhammad Ali shirt for much of our set. Another Incredible #RootsPicnic! Thank you,... https://t.co/6ITe2OD4Ro