'OK, Cam, pay attention because I'm only going to say this once' 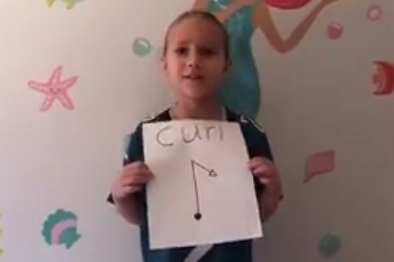 If Cam Newton thought it was funny to hear a female reporter talk about "routes" this week, perhaps he should watch a video that circulated on social media Friday.

In a 40-second clip posted to Twitter, a young girl called for the attention of the Carolina Panthers quarterback before schooling him on just about every pass play in the book.

Newton has faced a slew of criticism and a lost endorsement deal since saying he found it "funny to hear a female talk about routes" after Charlotte Observer reporter Jourdan Rodrigue asked him a question in a press conference on Wednesday.

Reese, a 7-year-old from New Jersey, donned an Eagles jersey and held up drawings as she explained each route for the 28-year-old Newton.

"OK, Cam, pay attention because I'm only going to say this once," she said to start the video.

She also took a shot at Newton's choice of clothing.

"Why do you wear the same clothes as my grandma?" she asked. "That's weird."

And then there was her dig on Newton's Superbowl 50 performance two seasons ago.

"You know, I think real boys fall on the football," she said.

Her father, who goes under the name "EROCK" on Twitter, said they shared the video for a few laughs and to talk a little trash before the Eagles visit the Panthers for a Thursday night clash next week.

"Cam, if you forget any of these, the Eagles are going to show you on Thursday night football," Reese said to end the video, holding up the drawings with both hands.

Newton posted his own video on social media Thursday night, in which he apologized for the comment.

"I realize that the joke is really on me," he said of the comment. "I've learned a valuable lesson from this."

In a statement Wednesday, the NFL called the comments "plain wrong and disrespectful to the exceptional female reporters and all journalists. They do not reflect the thinking of the league."