The National Weather Service has issued a Hazardous Weather Outlook for Southeastern Pa. and South Jersey 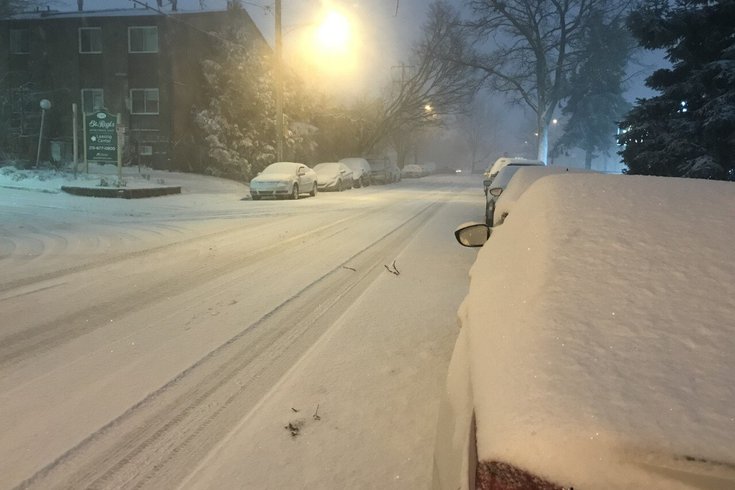 Some parts of the Philly region saw as many as nine inches of snow during the season's first storm in December.

The Philly region could see more snow this week, just over a month after the first major snowfall of the season.

The National Weather Service has issued a Hazardous Weather Outlook for Southeastern Pennsylvania and South Jersey, forecasting some light snow and a wintry mix of precipitation on Tuesday before changing over to rain.

The storm is expected to bring a variety of precipitation types to the Philly region late Monday and Tuesday, according to the National Weather Service.

Many areas will experience some snow and a wintry mix on Monday night and Tuesday. The storm is expected to weaken throughout the day on Tuesday, when light precipitation is forecasted to move in.

Snow and sleet accumulations are forecasted to be light, and the changeover to rain is expected to occur mainly east and south of the I-95 corridor. Those traveling outdoors are advised to prepare for slippery conditions.

Good Monday morning! A weakening storm system will bring a variety of precipitation types to our region later tonight and especially Tuesday. Very dry air may delay the onset of the light precip until during the day Tuesday and Tuesday night farther north. #pawx #njwx #mdwx #dewx pic.twitter.com/2Yc4e48ocr

Additional snow is expected to hit the Philly region on late Wednesday night into early Thursday morning, according to the National Weather Service.

The winter weather is forecasted to clear out by Thursday. Below is the NWS forecast for Philadelphia.

TUESDAY: Snow and sleet likely to continue until 7 a.m., when the storm will turn to sleet only. Storm expected to turn into rain after 8 a.m. Cloudy with a high near 38 degrees. Northeast wind of 5-10 mph. Chance of precipitation is 70 percent. New snow and sleet accumulation of less than a half inch possible. Overnight, a chance of rain before 1 a.m. Cloudy with a low around 34 degrees. Wind speeds around 5 mph after midnight. Chance of precipitation is 40 percent. New precipitation amounts of less than a tenth of an inch possible.

THURSDAY: Mostly cloudy with a high of 34 degrees. Overnight, mostly clear with a low around 21 degrees.

Over six inches of snow fell in parts of Philly, Delaware County and South Jersey — specifically Burlington and Camden counties.

Parts of Bucks County saw eight inches of snow, while areas of both Montgomery and Chester counties saw close to nine inches of snow accumulation.