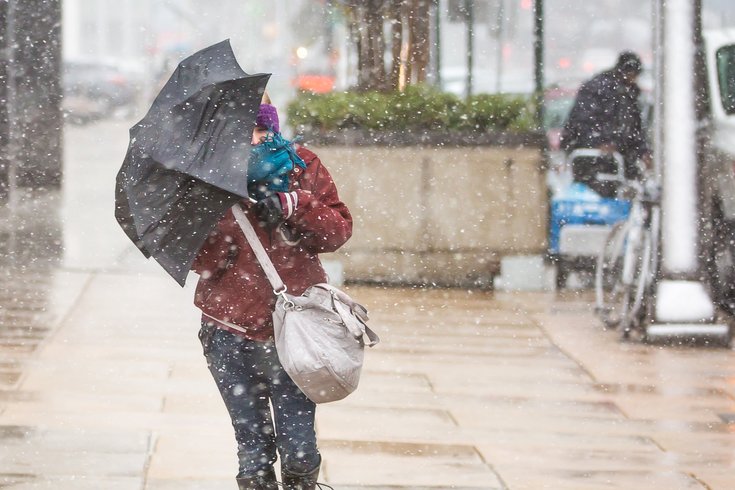 Snow and wind hit Philadelphia on Friday, March 10, 2017, after an unseasonably warm week.

Looks like everyone will have to keep the winter-weather gear handy for just a little longer.

As flurries flew across the region Friday, meteorologists had their eyes on the "potential for a major snowstorm" early next week, which according to one weather model could possibly bring as much as 12 inches of snow to the Philadelphia region, forcing the National Weather Service's Philadelphia/Mt. Holly office to issue a "Winter Storm Watch" on Saturday.

Temperatures will drop throughout the weekend, making Wednesday and Thursday's mid-week warmup with highs in the 60s feel like a distant memory.

Saturday's high temperature will reach just 30 degrees, dropping to 21 degrees at night with a high of 35 on Sunday.

Then comes the snow.

Monday's sunshine won't do much for the temperature. The mercury will only hit 38 degrees with a 90 percent chance of snow predicted overnight when the low will sink to 28 degrees.

Three to five inches could accumulate and continue into Tuesday, where the high will reach 36 degrees, the NWS reports.

AccuWeather said that there's "potential for a major snowstorm" Tuesday with accumulation reaching close to eight inches, while Weather.com predicts as between eight to 12 inches.

The NWS, who issued the watch for parts of eastern Pennsylvania and New Jersey Saturday, said that there's a chance for "widespread minor coastal flooding" at the Jersey Shore. Wind gusts could also reach 50 mph across the region late Monday into Tuesday. The snow should fall between 8 p.m. Monday and throughout the day until 8 p.m. Tuesday. 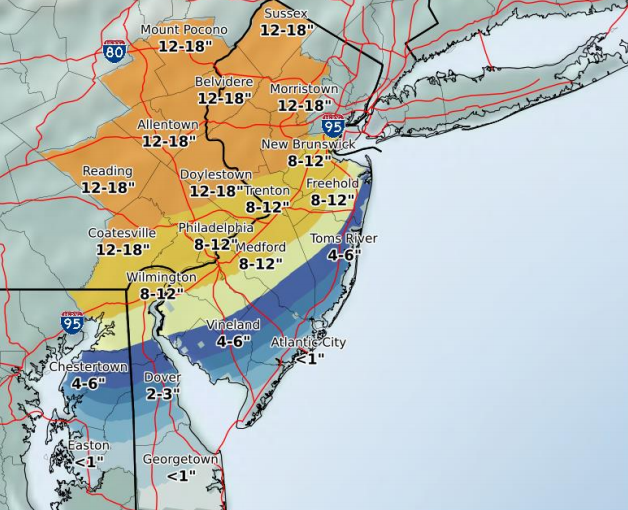 The storm, which originated in the central Pacific Ocean, is fueled by cold air expected to settle during the weekend in the northeastern United States.

How much snow that is dumped on Philadelphia on Tuesday will depend greatly on the storm's strength and direction. If it strengthens slowly near the East Coast, AccuWeather said, then only a light amount of snow could fall.

A major nor'easter could form if the storm strengthens quickly.

"With a rapidly-strengthening storm that tracks just off the coast, a widespread snowfall of 6 inches is likely with localized amounts over 12 inches in the Northeast," AccuWeather Senior Meteorologist Brett Anderson said.