'Unfortunately, it took a SWAT team to make me grow up,' says Richard Tamaccio Jr. as he preps to open his sandwich shop 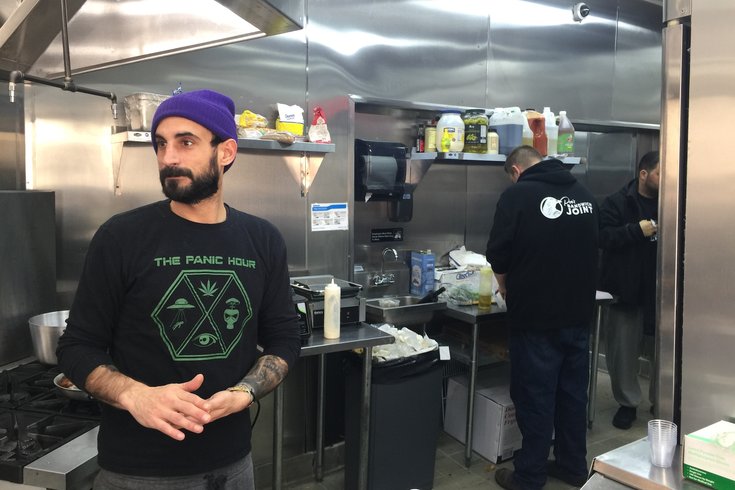 Richard Tamaccio, aka N.A. Poe, will open a restaurant named Poe's Sandwich Joint in Fishtown in early December 2018. With a baby on the way, it's his way of moving on from years of marijuana activism in Philadelphia.

In August 2017, Richard Tamaccio Jr. sat on a porch outside a rental home in Ocean City, N.J. and pondered what his future would hold.

Several months earlier, he and 21 others including his father and girlfriend found themselves in handcuffs after Philadelphia Police raided the marijuana “Smoke Session” party he’d hosted in an East Frankford warehouse.

The hefty charges leveled at Tamaccio – aka N.A. Poe – left him facing some serious prison time.

“It’s now the second time that I feel like I’ve been persecuted in the War on Drugs for being an outspoken citizen,” he said at the time. “At the end of the day, I ended up in shackles because of it. I’m not sure I have it in me to do a third time.”

Eight months later – after some charges were downgraded and he pleaded guilty to a possession of marijuana with intent to distribute felony – a Philadelphia Common Pleas judge sentenced Tamaccio to four years of probation, a $2,500 fine and 100 hours of community service, while not taking away his “unalienable right” to smoke weed.

Marijuana being decriminalized in Philadelphia along with medical marijuana legalized across the commonwealth certainly helped Tamaccio step back from his role of as hype man, infused with a bit of jester, for Philly’s weed community.

The next couple weeks will officially put Tamaccio on a new life path, though.

Not only is his girlfriend Rachael close to giving birth to the couple’s first child (a son) any day now, but Tamaccio is in a frenzy as he prepares to go legit by opening Poe’s Sandwich Joint at Frankford Avenue and Marlborough Street in Fishtown.

The road toward restauteurship started well before sentencing, as a friend who runs Fishtown’s Heffe Tacos That Don’t Suck saw Poe’s then-fledgling idea as a perfect fit for a property he owned across the street.

Fast forward to last week. Poe and Marc Lawlor – the business partner who left an established career as a corporate chef to get into the mix – found themselves awaiting final inspections before opening Poe’s Sandwich Joint, something they hope will happen in a pop-up sense as soon as next week.

The location hasn’t formally been cleared for opening, so Lawlor used a test kitchen to whip up a few of the 10 items which will appear on the start-up’s menu. (There were 25 at first, but that list was scaled back until they see how things go.) 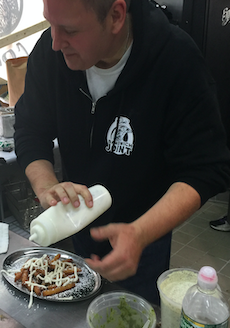 There were cheeseburgers with Velveeta designed as an homage to Delco’s iconic Charlie’s Hamburgers; sausage and peppers on a Sarcone’s roll; cheesesteaks with house gouda whiz, pepperoncini relish and mushrooms with thyme and garlic; and, for dessert, funnel-cake French fries. (Review: So damn good. All of it.)

While sampling the goods, Lawlor and Poe – who will be working the shop along with a couple counter employees and, possibly, line cooks once things get up and running – got to talking about their vision for the future.

For Lawlor, it was an easy decision to walk away from Loew’s in Center City, where he’d worked for the past 18 years.

“Last summer, he approached me and asked if I thought we could make a kitchen there. I didn’t think we could, but here we are,” Lawlor said. “I left Loew’s in April, left the corporate world behind so I wouldn’t be a slave to the man, making money for someone else anymore.”

For Tamaccio, what’s happened since has provided a solid pathway toward a more formal professional standing as he starts a family. He’s not leaving the past entirely behind, though.

He said he’s incorporating the lessons learned about social media’s impact on organizing marijuana rallies and parties into creating a buzz for the sandwich shop, primarily via Instagram.

He’s also seen a lot of support from a “super responsive” neighborhood; making those connections easier to build is the fact that walk-up sandwich shops are scarce around those parts.

“This is becoming Philly’s version of Brooklyn to a certain extent. People who grew up in Brooklyn are being phased out,” he said. “As Fishtown gentrifies, it’s important to help it keep its identity.”

Sure, their target audience is nearby neighbors, twentysomethings walking to and from the neighborhood’s bars and, among other demographics, stoners.

“Gourmet drunk food” is how Tamaccio describes a menu that will include the aforementioned items as well as vegan and vegetarian fare and several other sandwiches. 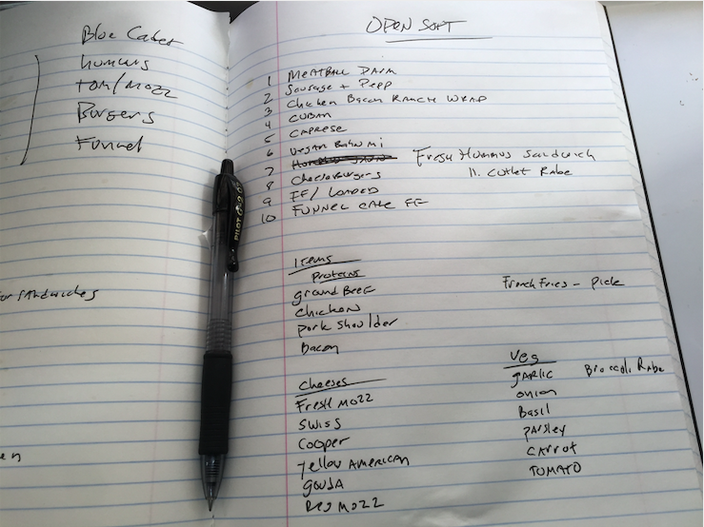 When Poe's Sandwich Joint initially opens in Fishtown, there will be 10 items on the menu, with plans to expand to more.

“Everything I’ve done in life has brought me to this point,” he said. “I relate to creatures of the night; the waiters, stoners, people going out drinking who will realize we’re not just here serving them sloppy s***.”

This foray into the respectable-business world couldn’t come at a better time for him, either.

“It’s about rising to two occasions: being a first-time dad and opening my first legitimate business,” he said. “I’m going to be 39 years old soon. The change is jarring, but I welcome it. I’m not running away from the things I’ve done in the past. I wouldn’t be here without them. But, I wouldn’t want to do them again.”

Looking back at the marijuana activist chapter, he said the group fighting that good fight had accomplished so much.

For evidence, he notes that there’s a dispensary just three blocks away from where Poe’s Sandwich Joint stands. The charitable aspects of the pot movement – like toy and back-to-school-supply drives – will continue through the business.

“People grow up in all sorts of different ways. Unfortunately, it took a SWAT team to make me grow up." --Richard Tamaccio

“I won. Most people who don’t know when they’ve won,” he said. “Things may not be perfect, but we had a ton of positive impact in Philadelphia, and I’m thankful because everything worked out like that.

“People grow up in all sorts of different ways. Unfortunately, it took a SWAT team to make me grow up. I’d never taken personal stock of what the consequences of my actions could be before that happened. I don’t want to spend the next 10 years looking over my shoulder. I’m satisfied with what I did as ‘Poe.’ We created a foundation.”

As far as logistics, city inspectors are scheduled to head out to the location for a final look sometime in the next week.

Once that’s complete – and all I’s are dotted and T’s crossed – Poe’s Sandwich shop should open with a 4:20 p.m. “pop-up opening” which will last until the final sandwiches are served on the 200 rolls they’ll have.

The pair said it’s certainly scary to open in the winter, but the new condominium complex being built across the street, as well as potential a delivery service (by foot, in some cases) will help bolster business with an audience held captive by the cold weather.