Four months after drug raid, activist says it's time for other leaders 'to step up' 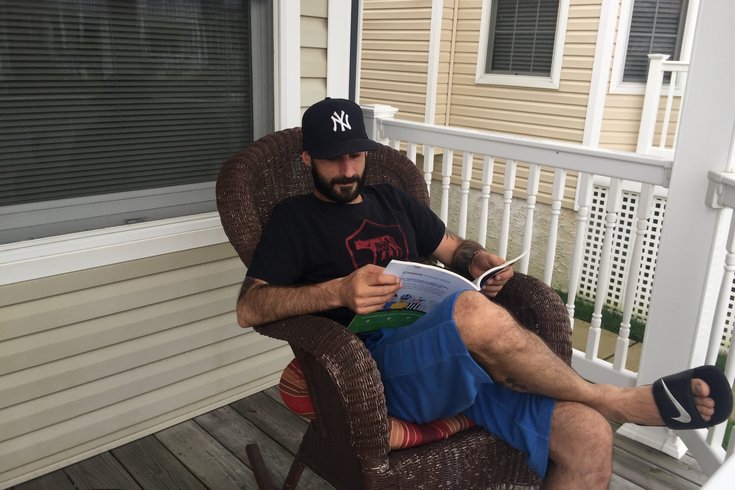 Richard Tamaccio Jr., aka marijuana activist N.A. Poe, reflected on the April drug raid that's left him facing hefty criminal charges, and the future of the local marijuana movement, during an interview on Aug. 7, 2017.

Back in April, Richard Tamaccio Jr. found himself in maximum-security custody after a high-profile raid at a marijuana “Smoke Session” party in Philadelphia’s Frankford neighborhood.

Many of the 22 people arrested have seen their cases fast-tracked and, to various extents, resolved.

However, Tamaccio and his girlfriend Rachael Friedman still await trial on charges related to drugs and “causing a catastrophe,” the latter stemming from the city deeming the location dangerous.

During a dreary Monday morning sitting on a deck in Ocean City, New Jersey, the activist and stand-up comedian also known as N.A. Poe wasn’t ruing the criminal charges that could land him behind bars, though.

Instead – after more than 100 days of radio silence from the oft-gregarious Tamaccio – he spoke with PhillyVoice about a spring and summer of reflection after a raid in which police confiscated some 50 pounds of marijuana, 100 pounds of THC-infused edibles, $50,000 in cash and four handguns from attendees and vendors.

It was a time that left him contemplating the future of the movement in a Pennsylvania preparing for its medical-marijuana age, what his role would be in it, and the essence of life when you know your freedom could soon disappear for years.

“For someone that’s used to moving 5,000 miles an hour and essentially having the emergency brake pulled on me, it’s been an interesting experience,” he said.

“Freedom is the thing that I value above all things. You don’t necessarily ever know that until that freedom isn’t there,” he continued of a realization that manifested itself as “not being able to be involved in the community, and the community being set back because of that to a certain extent.”

“Do I wish that there was a young N.A. Poe who rose up to be able to carry the movement? Sure. But there’s a lot of reasons people don’t want to do that. A lot of times when you stand up like that, you end up in handcuffs. I don’t necessarily think a lot of people are willing to fight for anything to that point.”

If that sounds like a slight of others, it isn’t.

He readily admitted that “at this point, I don’t even know how much I want to do it” anymore as a 37-year-old “with family, close friends. I don’t want to be put into a jail cell for standing up for other people’s rights. It’s kind of hardened me to a certain extent.”

In many ways, it represents a personal evolution beyond the movement's "Robin Hood" vibe into a pursuit of new directions to make a difference.

FIGURING IT OUT ON THEIR OWN

He said he opted against publicly venting about every last emotion he’s felt since the April 22 arrest, and the bail reduction that cut both loose more than a week later, so he could work through it all without bringing social-media folks into the mix, as others are wont to do.

“I do feel slapped in the face by the fact that, after all the things that we’ve done to show that we’re productive members of the community, being attacked in that capacity was a harrowing experience. It made me realize the ‘War on Drugs’ is still a very real thing.”

That latter realization may just be an effect of ill-timing.

The momentum from – and support of – Philadelphia’s decriminalization push, and solid working relationships with City Hall and police officials, inevitably clashed with Donald Trump’s victory and Jeff Sessions’ anti-marijuana efforts as Attorney General.

"We’re seeing the rise of ‘Reefer Madness’ again. One year ago, I’d have laughed it off, but we’re really seeing a demonization of marijuana today.” –Richard Tamaccio Jr.

Seeing this crackdown at a time of an opioid crisis has been jarring, particularly because many veterans – locally, regionally and nationally – have found marijuana helps fend off the dire impacts of opioid abuse.

He stopped way short of comparing the marijuana movement to that which worked for civil rights or the LGBTQ community, toiling away in an effort for acceptance and equality, because the struggles of those groups far outweighed his.

He noted he doesn’t see the same level of persistence in the Philadelphia marijuana movement, though.

The raid itself brought about a chilling effect on the community at a time when “corporate medical marijuana” is coming in to “sell overpriced products to customers who essentially can’t really afford it, and that’s no different from a pharmaceutical company.”

“That’s not what we fought for,” he said. “That’s not what our blood, sweat and tears are on the field for. I’ve realized we created a lot of enemies in those realms. Medical-marijuana access is going to be a joke in Pennsylvania, and we’re going to be leapfrogged by so many states that decided to take progressive roads to that point.” 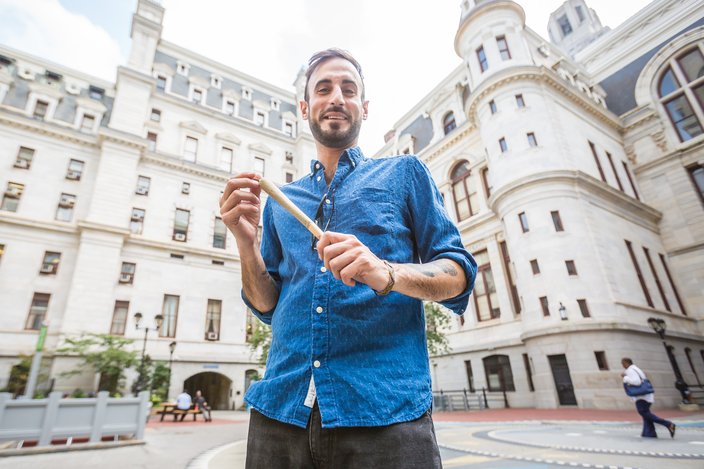 He likened it to his cohort of activists building a train and train tracks before corporate interests swooped in to reap the fiscal benefits at escalated prices to consumers rather than any sense of compassion for those who need it most. (Friedman noted that the station where the tracks end hasn’t even been built yet.)

“A state that has a budget crisis every four months like Pennsylvania would rather bang its head against a wall than make a progressive move,” Tamaccio said. “That’s a frustrating thing.”

He doesn’t regret being as outspoken as he was in the lead-up to the raid itself, as he’s not sure they would’ve made similar pre-raid progress hadn’t they done so.

"I’m not Seth Williams. I wasn’t stealing my grandmother’s money. We were going out of our way to help people.” –Richard Tamaccio Jr.

“When things are going well, and you’re doing things right, people are happy, you don’t think about that side of it,” he said. “People are in your corner. The support’s there. You’re helping people. You’d like to think that that’s something that will be left alone, especially in a city like Philadelphia.

While they couldn’t delve into the specifics of the ongoing case, Tamaccio and Friedman both conceded that it was quite a cloud to having hovering over their heads.

He acknowledged the absurdity of seeing people during his time in jail that were serving months on end for marijuana charges because they can’t scrape together enough money for minimal bail.

He also said that, during intake, the corrections officer noted that Tamaccio was the first person she’d heard in years who answered that they have been out of the country.

"If there’s a leader out there willing to take this on, it’s time to step up." –Richard Tamaccio Jr.

As for the immediate future before returning to court, the marijuana community will again host a book-bag and school-supplies event for local youths. This one’s scheduled for Aug. 26 at Heffe Taco (1431 Frankford Ave.).

They’ll also hold an event this fall to benefit Tuffy’s Fight. It’s helmed by Ricardo Rivera in the name of his 10-year-old daughter Tuffy, who’s seen “nothing short of miraculous” effects of cannabis oil helping stave off some seizures stemming from the rare form of epilepsy from which she suffers.

In recent months, Rivera has continued to step up his activism efforts. 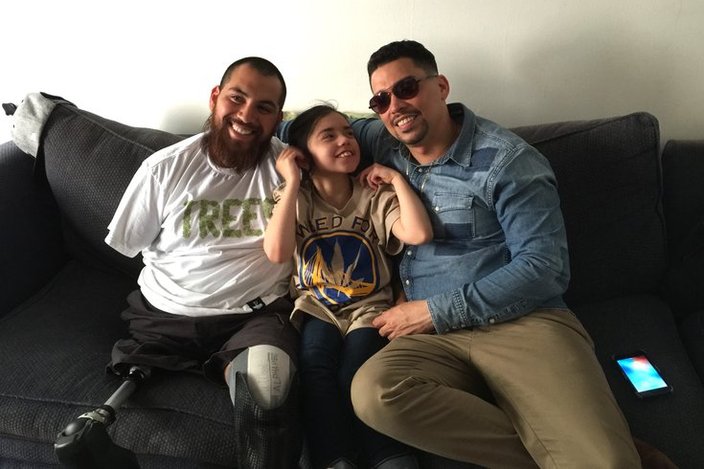 As things stand today, Tamaccio is considering his options for the future, with the uncertainty of a criminal trial looming.

He wonders what the chilling effect will be on “175 people who had guns in their faces” insofar as continuing to back their efforts, and he rues the fact that Rivera faced pushback from elected officials in Camden, New Jersey, who claimed pastors didn’t want his medical-marijuana push to succeed.

“It’s now the second time that I feel like I’ve been persecuted in the War on Drugs for being an outspoken citizen,” he said. “At the end of the day, I ended up in shackles because of it. I’m not sure I have it in me to do a third time.

"If there’s a leader out there willing to take this on, it’s time to step up. It’s scary to be set back in this capacity. I just have to starting thinking about how much of my time, and my personal life, can I put towards this. Of course, we’re on the right side of history, but I’m not a martyr."