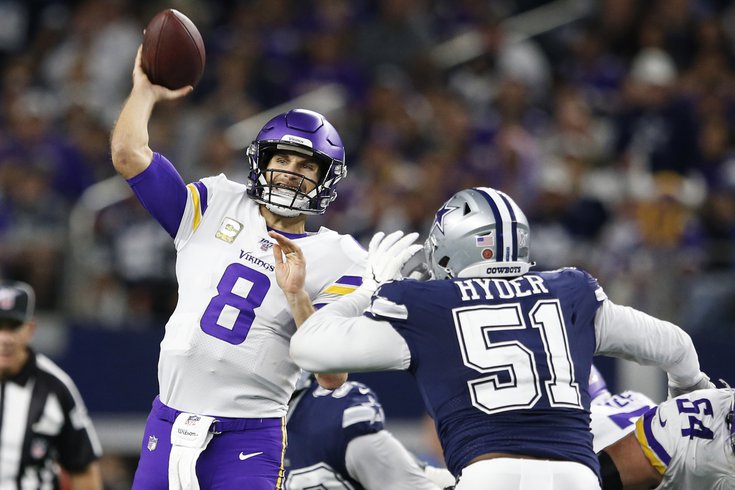 Kirk Cousins and the Minnesota Vikings can further bury the Dallas Cowboys, which is either a good or bad thing, depending on your perspective.

As we note each week in this post, the Philadelphia Eagles are not a good football team. They feel especially bad after getting dominated last Sunday by the New York Giants, a team with the worst record in the NFL since the 2017 season. Fortunately for them (or maybe not so fortunately?), the rest of the division is just as bad, as the Birds are still currently leading the NFC East at 3-5-1. They're also the betting favorites, at -165 to win the division on FanDuel, according to TheLines.com.

Some Eagles fans would prefer that the team still win the division. Others hope this season goes as badly as possible from here on out for (a) a better draft pick, and (b) hope that Jeffrey Lurie will make major changes this offseason.

As such, we'll attempt to outline both perspectives.

The "lose out" folks will begin to want to pay attention to Tankathon.com, at least when it comes to hoping for as high a draft pick as possible. If the season ended today, the Eagles would of course be in the playoffs as the NFC East "champs." If they were to get bounced in the first round as everyone would expect, then they would hold the 19th overall pick. Should the Giants, Football Team or Cowboys overtake them, their pick would be better. A look at the draft order, if the season ended today: 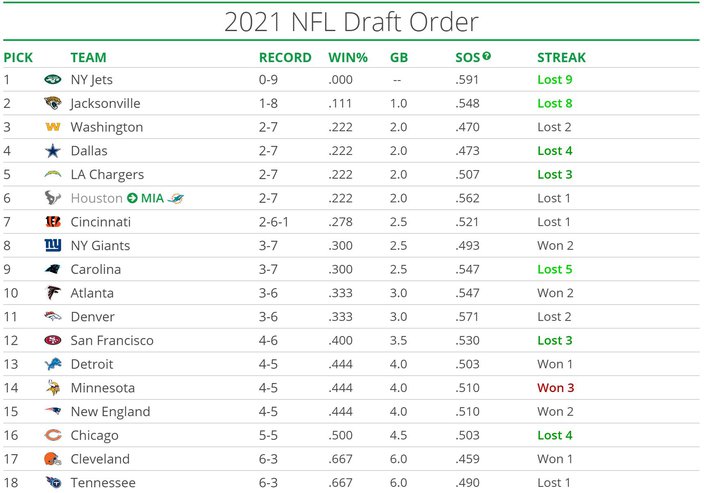 Anyway, the rooting interests for the "lose out" folks are pretty straightforward. You want the following teams to win as many games as possible:

To note, it's still probably best for the Jets and Jaguars, two teams that are highly likely to select quarterbacks, to continue to lose games so that the Football Team isn't able to address their glaring need for a QB with a blue chip prospect.

So in terms of Sunday games from a draft order perspective, the ideal winners:

Fans who want the team to win the NFC East

• Bengals at Football Team: Obviously, a Bengals win here further diminishes the chances of the Football Team catching the Eagles.

• Falcons at Saints: I think it's better if the Buccaneers win the NFC South, because they would be a bad matchup for the Eagles in the first round of the playoffs. Even though the Saints have owned the Eagles in recent years, the belief here is that the Birds would have a fighting chance against Drew Brees in a cold weather game in Philly. Plus, as noted in the "lose out" section above, it's good if the Falcons win some games.

• Rams at Buccaneers: Again, it's probably best if the Bucs just win their division.

• Packers at Colts: I don't think the outcome of this game matters, as the Packers are likely to run away with the NFC North regardless. Maybe just worth keeping an eye on because the Eagles head to Lambeau in a two weeks.