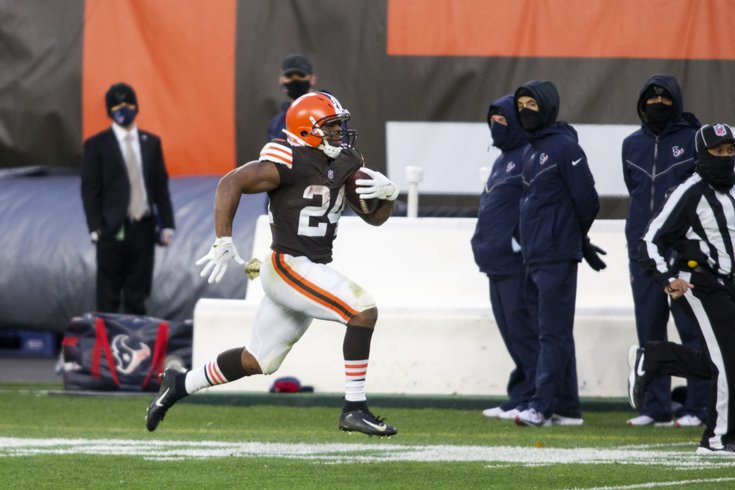 The Eagles are underdogs, currently at -3, according to TheLines.com's consensus odds.

1) The Eagles' run defense vs. Nick Chubb and Kareem Hunt

The Browns' rushing offense is fourth in the NFL with 159.0 rushing yards per game. The only teams in the league ranked higher in that department have quarterbacks who run it a lot:

The Browns get their rushing production from Nick Chubb and Kareem Hunt, who Jim Schwartz considers the two best running backs that the team will face this season.

"It's our biggest challenge of the season in the run game," Schwartz said. "And how well we stop the run is going to go a long way to how well we play in this game. They are an outstanding run team. Probably the best two running backs we face this year. Not just the best two on the team, but the best two overall. Great balance. Great power. They know what they want to do in the run game. Nothing sort of takes them out of it. There's not a whole lot you can do scheme-wise that forces them to do something else. They are going to run it. It doesn't matter what your look is and they are going to take that attitude of if you have an unblocked guy, the running back is going to try to run over them.

"It's going to take everybody, it's not just the defensive linemen, it's not just the linebackers; our corners are going to have to have an outstanding game defending the run. There's some carryover to like San Francisco. There are some similarities in what the run game is. We have to do a good job on stopping that zone stretch and taking their power run games. They are a good contact-running team and like I said both of those guys, Hunt and Chubb are both outstanding running backs and it's going to be our biggest challenge of the year and we need to be up to that challenge."

Chubb has missed a stretch of the season, but when he has played, he has been awesome, as he has averaged 6.1 yards per carry.

Even RB3 D'Ernest Johnson can play. Here's a look at Chubb, Hunt, and Johnson annihilating the Cowboys earlier this season:

The Eagles' 2020 run defense has been good at some things, and awful at others. Under Jim Schwartz, the Eagles have traditionally done a nice job against the types of bigger backs that the Browns employ. However, in 2020, they have gotten absolutely wrecked by quarterbacks, wide receivers, and tight ends in the run game.

In that respect, the Eagles are perhaps well-equipped to slow down the Browns' rushing attack, who almost solely rely on their backs to do damage in the run game. Odell Beckham Jr. had some big plays on runs early this season, but he's out with a torn ACL, while Baker Mayfield is averaging 7.3 rushing yards per game.

When we note the Eagles' defensive line vs. an opponent's offensive line, it's typically to point out where the problem spots are on the opposing O-line. This week will be an occasion in which the Eagles are perhaps at a matchup disadvantage against an opposing offensive line, as the Browns have one of the best lines in football. It looks like this:

The Browns have the luxury of getting those guys on the move, like the Eagles used to be able to do with their offensive linemen, because they're all athletic. It's spider chart time!

Because the Browns' linemen are all impressive athletes, the run game is super effective on stretch plays, counters, and misdirections. This is pretty simple stuff here, but the Browns' athletic linemen make it look easy:

The @Browns O-Line is a well oiled machine that consistently opens lanes for @NickChubb21 to power through. pic.twitter.com/ly6EVaGnuP

And in the passing game, the Browns have only allowed 12 sacks all season, which is fourth-best in the NFL.

3) Myles Garrett vs. Jason Peters (and the rest of the Eagles' offensive line)

Myles Garrett leads the NFL both in sacks (9.5) and forced fumbles (4). Most of his sacks have come against opposing left tackles this season, but he lines up outside, inside, and on both the left and right sides. He is an elite player, with length, strength, speed, flexibility, and balance.

Against the Eagles, I would expect that the Browns will try to take advantage of a matchup against Jason Peters as opposed to Lane Johnson. Good luck, JP.

UPDATE: Good luck did indeed shine upon Peters, as Garrett has since been placed on the Browns' COVID-19 list, and won't play.

OK, so that's not a matchup, necessarily, but the Eagles should (grab a megaphone) RUN THE BALL!

The Eagles are passing on 63.7 percent of their plays this season, which is the third-highest rate in the NFL, despite the following:

Over the next five games, the Eagles face a very difficult stretch of teams:

I hate being the "run the ball" guy, but when you are clearly the lesser of the two teams in a matchup, if you can run the ball effectively, you can shorten the game, and maybe the outcome is decided by just a small handful of big plays. The Eagles' best chance of stealing one or two of these five games is try to turn them into outcomes decided by a big play or two. The most effective way to do that, in my view, is to control the football, which for the Eagles, starts with running the ball.

5) Figure out a way to exploit S Andrew Sendejo

Again, that's not a specific matchup, but in case you were wondering what happened to Andrew Sendejo after his short-lived Eagles career, he plays for the Browns now, and he's easily their worst starter on either side of the ball.

Sendejo wasn't supposed to be a starter, but when rookie Grant Delpit tore his Achilles, Sendejo was the next man up, and he has stunk. For example:

What was #Browns Andrew Sendejo doing on this touchdown?pic.twitter.com/5LbjJIF16Y

Whether it's with Dallas Goedert or a slot receiver or getting running backs involved in the passing game, the Eagles have to find a way to force Sendejo to try to make plays, because he is the clear weak link on this Browns roster.