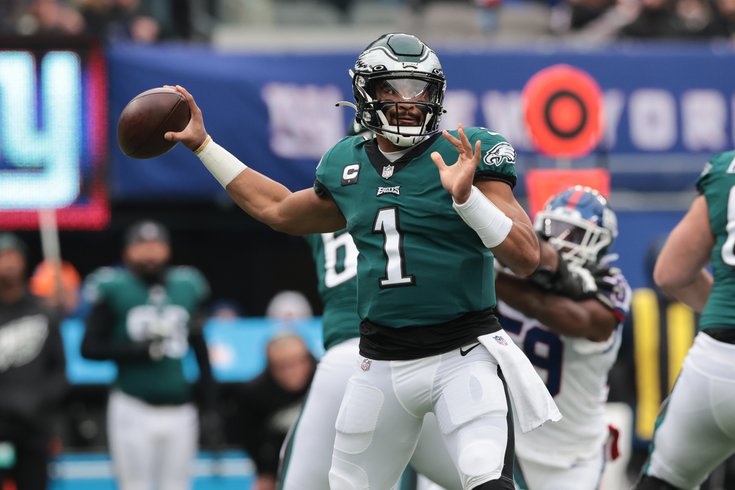 Jalen Hurts had one of his worst career performances in the Meadowlands last year. A repeat of that is not expected.

For the gambling degenerates, here are my Week 14 NFL picks. To note, the team logos indicate who I think will win the game, not cover the spread. At the end of the picks, I'll note a few teams that I like based on the spread.

Raiders (-6.5) at Rams: This probably looked like a smart pairing for a Thursday Night Football game when the schedules came out, between a pair of talented teams that each have moved both to and from Los Angeles at some point in their franchises' histories. Instead, it's just a 5-7 team against a 3-9 team, and nobody cares.

The Raiders at least have a slim hope of making the playoffs after starting the season at 2-7. They have won three straight and have the following upcoming schedule:

If you consider that there's a chance the Chiefs could be locked into a playoff seed by Week 18, they have five winnable games left on their schedule. Meanwhile, the Rams have lost seven games this season by at least seven points, and four of those games were at home. I don't normally like laying this many points, especially on an inconsistent team like the Raiders, but this Rams team is just so, so bad. And what the hell... I need a reason to watch it.

Eagles (-7) at Giants: All season long, the Giants have been thought of as the overachievers of the NFL, or less kindly, the team that is not as good as their record would indicate. They got out to an impressive 7-2 start, but have since fallen to 7-4-1, as injuries have taken a toll on their roster. For example:

Beyond the injury woes, the Giants have other concerns surrounding some of their best players, such as:

The Giants have asked a lot of the few good players they have on their roster, and we may see them tire out down the stretch.

Jets at Bills (-9.5): Congrats to the Jets for emerging from the NFL cellar this season and playing meaningful games in December, but the benching of Zach Wilson in favor of Mike White is a really bad development for this franchise and it's confusing why people seem to be excited about it.

Browns at Bengals (-6): The Bengals are hot, and have played themselves into a situation in which they are now contenders for a first-round bye. The Browns benched Jacoby Brissett, who had played surprisingly well for Cleveland this season to make room for Deshaun Watson, who threw for 131 yards and an INT in his return against the worst team in the league.

Vikings at Lions (-2.5): This is a very interesting line! The Vikings are 10-2. The Lions are 5-7. And the Lions are favored? It actually makes sense, given that the Lions have won four of five and are arguably playing better football than the Vikings right now.

Jalen Reagor is having none of it.

Jalen Reagor has guaranteed #Vikings to win at Detroit. I asked him about possibly clinching division & he said “We’re going to win” I asked him if that's a guarantee: "Yes'' He added “I’m not going to say nothing about if we might win. I’m..expecting us to win..I have no doubts"

I think this is maybe an apt time to check on Reagor's numbers. 8 targets, 6 catches, 87 yards, 1 TD. Efficient!

Ultimately I think the Vikings are better, so I'll take them to win outright along with the points. If you're an Eagles fan, this is a great "emotional hedge" game to play. Take the Vikings, and if you win, YAY MONEY. If they lose, at least the Eagles are helped by the loss. And if they lose by 1 or 2 points you get it all.

Jaguars at Titans (-4): You're aware of the "new head coach" bump, right? You know, when a coach gets fired in-season, and the players on the roster for a brief period realize, "Oh crap, the organization is serious. We better get our s*** together." And then for a game or two, they play inspired football.

Well, is there such a thing as a "new GM bump?" I believe there is, and I think the Titans are going to play much better football this week than they did in Philly on Sunday after firing GM Jon Robinson on Tuesday.

If the Titans lose to the Jaguars this week, the door creaks open ever so slightly for Jacksonville to win the AFC South. If the Titans win, they'll all but clinch the division. I believe they'll wake up and take care of business.

Ravens at Steelers (-2.5): This line is a lot like the Vikings-Lions line above. The Ravens are 8-4 and trying to win the AFC North. The Steelers are 5-7. BUT... the Steelers have won three of four and are playing much better than they did earlier this season, while Lamar Jackson will likely be sidelined for this game.

Chiefs (-9) at Broncos: I'm going to get extremely basic with some stats here:

I probably didn't need a chart for that. Anyway, yeah, I think I'll take the Chiefs.

Buccaneers at 49ers (-3.5): Quarterbacks facing Tom Brady in their NFL starting debuts are apparently 0-6 against him. This is a who's who of craptastic quarterbacks:

Yes, there are questions about whether the 49ers can stay afloat with the literal last pick of the 2022 NFL Draft at the helm, but I don't think we'll see them crater this week. As we showed in the Hierarchy, this Buccaneers' offense sucks. It's among the dregs of the NFL. Tom Brady is the most recognizable player in sports, but he has not been good this year, and the advantage that the Niners have over the Bucs across the rest of their respective rosters is enormous.

I think the Niners will rally around Purdy and smash the overmatched Bucs.

Panthers at Seahawks (-3.5): The Panthers have lost nine consecutive road games. No. 10 is on the way.

Dolphins (-3) at Chargers: I like the Dolphins' chances of bouncing back after getting smacked around by the 49ers on Sunday, especially against this loser Charger team.

That sets up an interesting question. Is Kyler Murray at least a decent quarterback, or is he just bad? I think he's just bad.