Here's a look at the other teams Philly fans should be cheering for this weekend... 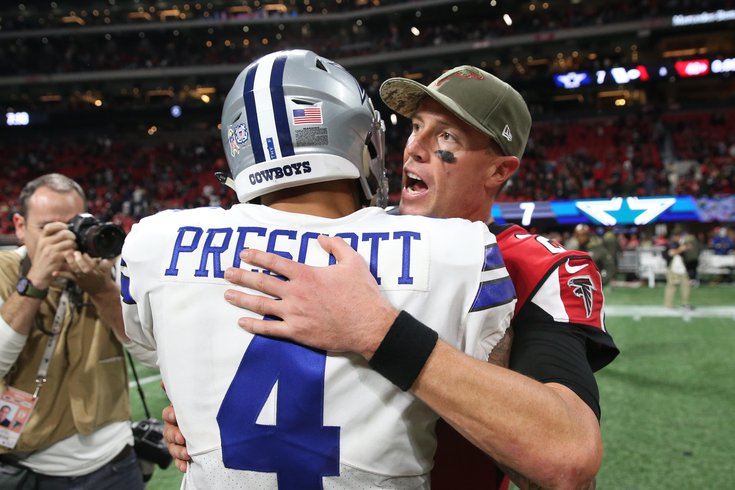 It was only after Matt Ryan's vampire bite, shown here, that Dak Prescott began choking in big games.

In past seasons, Philadelphia Eagles fans generally rooted for their own team, and kept an eye on the rest of the NFC East. Whether you think they're still Super Bowl contenders (that club is emptying out) or merely just another team trying to eke their way into the playoffs (still optimistic, maybe), it's perhaps worth keeping tabs on the conference, as opposed to just the division.

• Giants at Bears: At some point, Eagles fans will want the Giants to win some games, as it would not be ideal for them to land, say, Oregon's Penei Sewell, who could be the best OT prospect to come out in a long time. But for now, it's probably just best if a division rival continues to lose, and lose, and lose.

• Falcons at Cowboys: As I've mentioned in another post or two, we all realize it's going to be another one of those years in which the Eagles don't really deserve to be in the hunt for a divisional crown, but because the NFC East stinks, they're going to hang around no matter how mediocre they may be... right? Anyway, the Cowboys could be missing both of their offensive tackles, and the Eagles can escape severe damage with their Week 1 loss if they're able to take care of business this week, and/or if Dallas keeps losing games most expect them to win.

• Panthers at Buccaneers: A 0-2 start for Tom Brady would be fun.

• Broncos at Steelers: I don't think there's a rooting interest in this game, necessarily, but it's one to monitor, since the Eagles play the Steelers Week 5.

• Football Team at Cardinals: The Cardinals are contenders, I think, so it's not great for them to be socking away wins. However, it's probably worse for the Eagles if the Football Team gets to 2-0.

• Ravens at Texans: While I don't think it matters if the Steelers win or lose this week, it is probably best for the Eagles if the Ravens do. The Ravens have won their last three Week 1 games by scores of 38-6, 59-10, 47-3, and 20-0. Add all that up, and it's a combined score of 164-19, lol. They typically cool off soon after, but it would probably be good for the Eagles to see confirmation that they aren't just going to steamroll everyone this season. The Eagles play the Ravens Week 6.

• Patri*ts at Seahawks: This would of course require you to root for cheaters, but obviously, if the Seahawks are around at the end of the season, they are a tried and true bad matchup for the Eagles.

• Saints at Raiders: Yeah, again, like the Seahawks above, the Saints are another proven bad matchup for the Eagles.