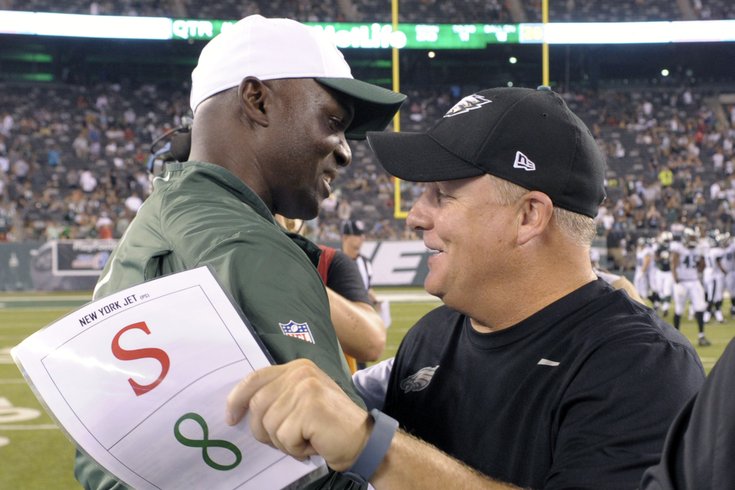 For the gambling degenerates, here are my Week 3 picks. To note, the helmets indicate who I think will win the game, not cover the spread. At the end of the picks, I'll note a few teams that I like based on the spread.

Falcons (-2) at Cowboys: The Falcons continue their journey through the NFC East after taking care of the Eagles Week 1 and the Giants Week 2. Obviously, the Falcons are two-point road favorites because the Cowboys are missing Tony Romo, Dez Bryant, Ronald Leary, possibly Jason Witten, Orlando Scandrick, Greg Hardy, Rolando McClain, and Randy Gregory. The Eagles could not take of business against that depleted group. The Falcons will.

Colts (-3.5) at Titans: The Colts are the AFC's version of the Eagles. They came into this season with a lot of hype and have managed to score just 21 points through two weeks. The Colts are scoring just 1.05 points per drive, which is dead last in the NFL. The Titans started strong Week 1, like they did a year ago, but came back down to Earth last week against the lowly Browns. I expect the Colts to get back on track against a team they outscored by 41 points in two games last season.

Raiders at Browns (-3.5): I would make fun of the Raiders and Browns, but these two teams have done something this season that the Eagles have not... win a game. One of them will have two wins when this one is over. #Analysis! I could pretend I've studied these two teams, but let's cut through the crap and just pick the home team.

Bengals at Ravens (-2.5): Like the Colts and Eagles, the Ravens are another surprise 0-2 team. They are heading into an important Week 3 game against a division rival. A week ago, the Ravens lost to the Raiders. Oof. A year ago, the Ravens had the sixth-best point differential in the NFL, at +107. However, watching the Ravens during training camp, I was thoroughly unimpressed by their team, although I do think they'll bounce back at home in a must-win game.

Jaguars at Patri*ts (-14): The Patriots look like they are clearly the best team in the NFL right now. Tom Brady has a 119.9 QB rating, Rob Gronkowski has four TDs, and the Pats' defense leads the NFL in sacks (11) and interceptions (4). Additionally, they cheat, which of course always gives them that built-in advantage. Pats big.

Saints at Panthers (-3): It would appear that Drew Brees is going to play this Sunday, despite having an injured shoulder. Doesn't matter. Brees is on the downside of his career, and his team around him isn't good. The Panthers defense is playing good football so far, and Cam Newton is doing enough with his no-name skill position players to win games.

Eagles at Jets (-2.5): Defensively, the Jets average 0.81 points allowed per drive, which is best in the NFL. Offensively, the Eagles average 1.36 points per drive, which is 30th in the NFL. The Jets have also collected 10 turnovers from their first two opponents, which is a combination of them making plays, and their opponents being sloppy with the football. Getting five turnovers per game is clearly not sustainable. Still, the Jets defense is playing outstanding football while the Eagles' offense is... you know, not. The Jets have just enough weapons on offense led by Brandon Marshall to put up enough points on offense to get their first ever victory over the Eagles, who are 9-0 all-time over the Jets.

Buccaneers at Texans (-6.5): I get that the Buccaneers aren't a good football team, but I'm not sure how a team that can't score can be laying 6.5 points against anyone. The Texans are 2nd worst in the NFL with 1.32 points per drive, which shouldn't come as a surprise considering their quarterbacks are Ryan Mallett and Brian Hoyer. I'll pick the Texans to win this game, but getting 6.5 points with the Bucs is great value.

Chargers at Vikings (-2.5): I'll keep saying it. I'm not sure what everyone sees in the Vikings. In my opinion, the Chargers are a clearly better team with a far better quarterback (although I do like Teddy Bridgewater's future). Give me the Chargers and their diverse passing game to win, and I'll take the 2.5 points of top of it, please.

Steelers (-1) at Rams: This is one of those "What do you know, Vegas" lines. How are the Steelers only one-point favorites over this crappy team? This line is a little like the Patri*ts-Bills line a week ago that looked too good to be true, but wasn't. I'll take the Steelers all day, every day at -1 over Nick Foles and the youngest team in the NFL.

49ers at Cardinals (-6.5): The Cardinals' offense is humming, as they are scoring 3.3 points per drive, which is best in the NFL. They're also gaining 42.2 yards per drive, which is second-best behind the Steelers. A week ago against the Steelers, the 49ers could not slow down Pittsburgh's passing attack, as Ben Roethlisberger went 21 of 27 for 369 yards (13.7 YPA), 3 TD, and no picks. I expect more of the same from the the Cardinals.

Bills at Dolphins (-2.5): Miami looks like crap. Week 1 against the Redskins, they were outplayed for four quarters, but won because of the Redskins' ineptitude on special teams. Then they lost Week 2 to the Jaguars. The Bills got their fill of humble pie last week against the Patri*ts, but they have a defense that should be able to handle the Dolphins. I'll take the Bills to win outright.

Bears at Seahawks (-15): As I've said in my hierarchy posts, I think the Bears have #1 overall pick potential. They may very well be the worst team in the NFL, and it doesn't help that they play in a division with a powerhouse (the Packers) and two other competent teams (Vikings and Lions). The Seahawks will get Kam Chancellor back, not that they need him for this one.

Broncos (-3) at Lions: Every year there's a team that I think is good, and then just isn't. This year that team might be the Lions, who play very good run defense, have a quarterback with a great arm, and a bunch of really talented skill position players, but just don't win for whatever reason. The Eagles stand to benefit from the Lions being bad this season, as they hold the Lions' third round pick. Meanwhile, Peyton Manning is no longer "Peyton Manning," but the Broncos' defense is awesome.

Chiefs at Packers (-7): The Chiefs do a great job of getting pressure on the quarterback and making plays on the back end when they make mistakes. Unfortunately, their play-making ability won't matter against the best player in the world, who doesn't make mistakes.