Verge Aero, based out of Pennovation Works, puts on spectacle for health care workers 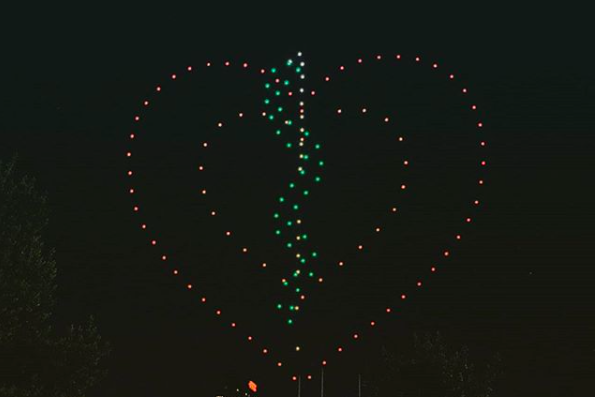 Front-line workers in West Philadelphia were treated to a drone light show outside the Hospital of the University of Pennsylvania, where Verge Aero paid tribute to those who are sacrificing during the COVID-19 crisis.

The drone light show was put on by Verge Aero, a company based out of the University of Pennsylvania's Pennovation Works campus. Its previous entertainment shows have appeared during the Olympics and accompanied concerts by Coldplay and The Rolling Stones.

Tuesday night's show, part of the #PhillyShinesBlue and #LightItBlue campaigns, featured a range of appreciative messages and visuals from the Liberty Bell to a grumpy-looking coronavirus.

THANK YOU TO ALL OF THE MEDICAL COMMUNITY, FIRST RESPONDERS, AND FRONTLINE WORKERS YOU ARE #HEROES #phillyshinesblue #lightitblue #dronelightshow

The display was most visible from The Hospital of the University of Pennsylvania and the Children's Hospital of Philadelphia.

Verge Aero's drone light performance came on the same day that the Navy Blue Angels and Air Force Thunderbirds flew over Philadelphia in honor of the city's front-line workers.