What they're saying about Eagles: Options to replace OC Frank Reich and QB coach John DeFilippo 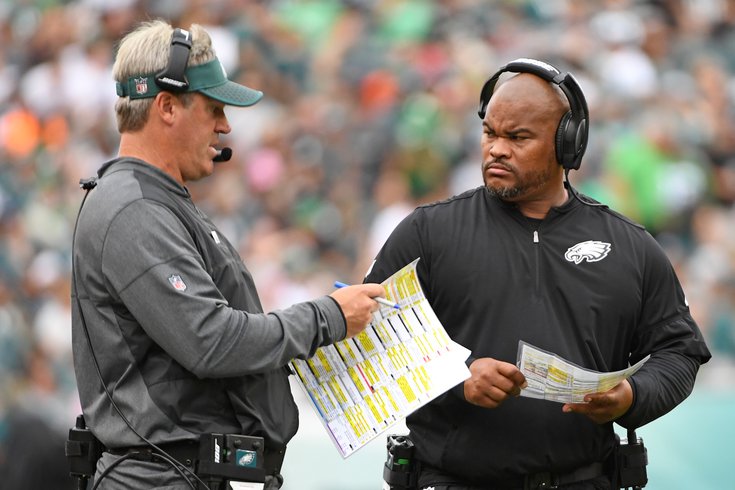 The Eagles had one of the best offenses in the NFL this season, one that withstood injuries to multiple Pro Bowl players while integrating several new key pieces at the skill positions and ultimately helped them capture Philly's first Super Bowl title.

So, perhaps it's not surprising then that two of the Birds' top offensive assistants, coordinator Frank Reich and quarterbacks coach John DeFilippo, have already been hired away. On Sunday, Reich accepted the head coaching job with the Colts days after Patriots OC Josh McDaniels backed out of the job to remain in New England. A few days earlier, DeFilippo was hired by the Vikings to replace Pat Shurmur, who became the Giants' head coach, as offensive coordinator.

That's unfortunate timing for Flip, who is from the area and would've been a likely candidate to replace Reich as the Eagles offensive coordinator. Had Reich taken the Colts job first, DeFilippo might've been able to take the same promotion while remaining with his hometown (and Super Bowl champion) team.

Now, just like they did with the players throughout the season, the Eagles coaching staff will have to find suitable replacements for these vacant positions. In today's edition of What They're Saying, we'll take a look at some potential candidates to replace Reich and DeFilippo, both from inside and outside the organization.

Here's a look at some current Eagles assistants who could be up for a promotion now that they've lost two assistants...

This wouldn’t come as a surprise since the Eagles value Staley. He survived both Andy Reid’s firing in 2012 and Chip Kelly’s firing in 2015 to remain on Philadelphia’s coaching staff. The Eagles actually gave Staley an interview for their head coaching vacancy before hiring Doug Pederson in 2016.

Staley doesn’t have a TON of experience but it’s not like the Eagles are counting on him to call plays. That’s Pederson’s responsibility.

Another benefit of promoting Staley is that it prevents the Giants from hiring him as their OC. Pat Shurmur still needs to fill that position in New York.  [bleedinggreennation.com]

Eagles wide receivers coach Mike Groh, who played quarterback at Virginia, seems the most likely in-house option to replace DeFilippo. Groh has previously coached quarterbacks at the college level and spent 2016 as the Los Angeles Rams' passing game coordinator, and he'd likely view a move to DeFilippo's old job as a promotion.

Press Taylor, the Eagles assistant quarterbacks coach, is another person to watch as the movement shakes out. Taylor joined the Eagles staff under Chip Kelly in 2013 but has continued to impress Pederson and could either replace DeFilippo or stand as a potential option to fill in at wide receivers coach if Mike Groh takes the quarterbacks coach job.  [pennlive.com]

If the Eagles decide to look outside the organization to replace Reich and DeFilippo, here are a few names that could be on their radar...

Sure, Ben McAdoo was a horrible head coach for the Giants in 2017, but some fans tend to forget that McAdoo was actually a great offensive coordinator in New York before replacing Tom Coughlin in 2016, fielding the sixth most potent offense in the league in 2015. With the Homer City, Pennsylvania native calling plays, McAdoo almost singlehandedly revitalized Eli Manning‘s career, and took the Giants to their first postseason appearance since winning Super Bowl XLVI in 2012...

When the Eagles began their search for a new head coach in 2016, McAdoo actually became the team’s first choice to lead the club. Though the team obviously made a great call selecting Pederson after being spurned, with a shiny new Lombardi Trophy to prove it, that doesn’t downplay that there could still be some legitimate interest between the two parties moving forward.  [section215.com]

Geoffrey Knox | Inside The Iggles

Someone with Shula’s talent must be given a serious look. Shula was once the head coach of the Alabama Crimson Tide.

In the NFL, he’s held several positions including offensive coordinator for two different teams. He also has six years of experience as a quarterbacks coach. During his seven years with the Carolina Panthers he helped guide Cam Newton to AP Offensive Rookie of the Year in 2011 and NFL MVP in 2015.  [insidetheiggles.com]

As always, Roob's 10 stats of the week are amazing – wait until you see the Corey Clement numbers – but with the Birds losing two of their top offensive assistants, it seemed fitting that we share these two in particular. You'll see why...

6. The Eagles and Patriots combined for 1,151 yards, the most in NFL history in any game — regular season or postseason. The previous high was 1,133 in a Yanks-Rams game at Yankee Stadium in 1950 (the Yanks were owned by Ted Collins, who was Kate Smith's manager). The two teams also combined for 874 passing yards (ninth-most in NFL history).  [nbcsports.com]