What they're saying about the Eagles: Super Bowl cash influx and easy schedule add to hype train 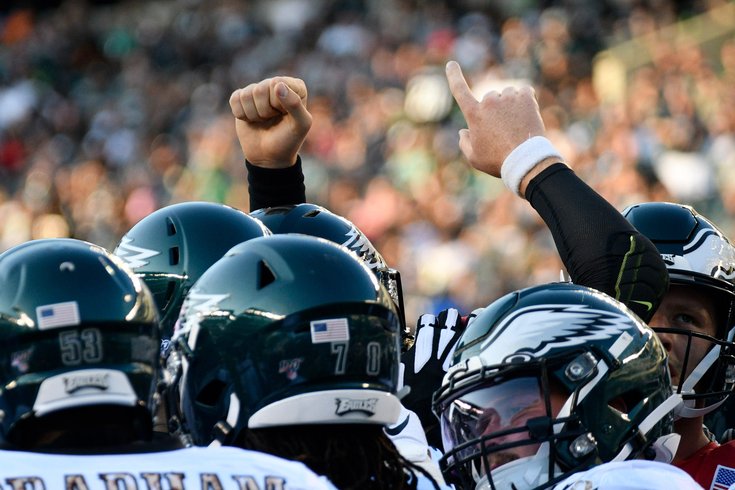 The Eagles have one of the best teams on paper in the NFL this year.

The Eagles have been looking pretty darn good thus far in training camp.

The Eagles are getting more and more hype around them as we approach their preseason opener against the Titans on Thursday.

We'll spare you a lengthy introduction. The subject of today's Eagles what they're saying is that the hype is growing.

Teams with the most bets to win the Super Bowl:

Teams we've taken the most money on to win the Super Bowl (so far):

Make your bet while you can — at 14-1 the Eagles have really good odds for how popular they are. The trend would imply that sportsbooks will likely look to cash in on those wagers by lessening the odds as the season approaches.

The Eagles surely hope they don't find themselves as betting favorites (they currently hold the fifth best odds behind the Patriots, Chiefs, Saints and Rams). According to fivethirtyeight, just three times since 2001 has a preseason Super Bowl favorite actually won a championship.

Speaking of those Saints (10-1 to win the Super Bowl) and Rams (9-1), each of them — as well as the Cowboys — are teams on the decline according to ESPN's Bill Barnwell.

.@billbarnwell predicts which teams' stock is going up and down in 2019.

Dallas is, of course, going to be Philly's main competition for the NFC East this coming season. They are the defending division champs but if you believe Barnwell, they are set to take a step back. Here's a snippet of some of the Cowboys analysis:

Six of Dallas' seven wins during that late-season surge came by seven or fewer points, with an eight-point win over a Colt McCoy-led Washington team as the lone exception. That game wasn't particularly close, but the Cowboys were either tied or trailing in the fourth quarter in five of those seven victories. If you want to consider them cool customers who knew how to close out games, consider that the defense blew fourth-quarter leads in four of those games, and Prescott fumbled away a red zone possession that might have sealed the team's upset win over the Saints, only for Brees to throw a bizarre interception right to Jourdan Lewis to seal the win. ...

If a young Cowboys team takes a step backward, the blame will likely be thrust upon Garrett and/or the various contract situations that are currently enveloping the team's core. I wouldn't be so sure. The Cowboys were a league-average team or worse in 2018, when they finished finished 21st in DVOA -- below the Broncos, Giants and Packers. It wouldn't shock me if Jerry Jones' team were actually better on a game-by-game basis in 2019 yet failed to make it to 10 wins. [ESPN]

One of the potential reasons for the betting masses investing in Eagles stock is their schedule — which Sharp Football projects as the third easiest in all of the NFL.

Philly made the playoffs last season as a Wild Card team remember, and with that avoided getting a first place schedule. They also get four games against the AFC East, which aside from New England features the Jets, Bills and Dolphins. Here's some more on the schedule assist from The Athletic's Sheil Kapadia:

Given how bad the Giants and Washington figure to be, along with matchups against the AFC East, this really is a favorable slate for the Eagles. They have to get on a plane just once after Week 8. Overall, the Eagles are currently the favorites in 12 of 16 games. The only exceptions are at the Falcons (+1.5), at the Packers (+2), at the Vikings (+2.5) and at the Cowboys (+3). Those four games all take place in the first seven weeks of the season. From Week 8 on, the Eagles are favored in every game. [The Athletic]

And finally, as if your head isn't big enough with visions of Eagles grandeur, CBS sports made five bold predictions about the Eagles for 2019 including an NFC East title and return trip to the Super Bowl. They also projected the Birds' defense would be a top five unit in the NFL. Here's the thinking behind Sean Wagner-McGough's proclamation:

Last season, the Eagles' defense finished 15th in DVOA, so they would need to make substantial improvements to finish in the top five of that metric. But the Eagles have the coaching and the talent level to get there. They already had one of the deepest defensive lines in the league with Fletcher Cox, Brandon Graham, and Derek Barnett, and then they went out and added Malik Jackson and Vinny Curry.

That gives the Eagles the deepest and best defensive front in football. It's behind the defensive front where things get a bit dicey, but the Eagles have enough good pieces in the secondary to make up for their problems at linebacker.

But for this group to join the other elite defenses, they'll need their defensive linemen to drag them there. They'll need defensive coordinator Jim Schwartz to coach up the linebackers. They'll need young cornerbacks Sidney Jones, Ronald Darby, and Jalen Mills to play up to their potential. [CBS Sports]