What they're saying: Can the Eagles overcome both the Patriots and the referees?

Plus, a look at GM Howie Roseman's magical 2017 offseason 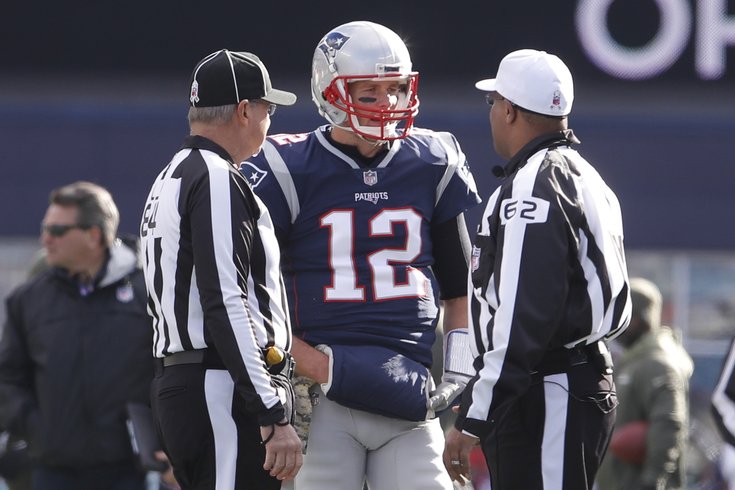 Wonder what they're talking about?

In Sunday's edition of What They're Saying, we took a look at some of the lighter stories surrounding the Philadelphia Eagles' upcoming Super Bowl LII matchup against the New England Patriots.

If you missed that – or any of our recent Eagles coverage – you can check that out here because we're going to take things a little more seriously this time around.

After all, the game is less than a week away.

Another reason to stay serious is that Monday night also marks the official start of the Super Bowl Circus, as players from both teams will take to the podium for the annual media day (night?). We'll have plenty of coverage from that as well, but as we wait to hear from the players themselves, let's take a look at what they're saying about the Birds, starting with the NFL's movie-style trailer for the big game.

[I know, I know; I said we were getting serious. We'll get there in a second.]

Can we just play the game already?

It's in the game

I know ... this one isn't serious either. This is the last one.

Marc Farzetta talked to a few Eagles players who are using video games to keep themselves from getting distracted during the week leading up to the Super Bowl.

"We got to pack up on the Xbox and do something to entertain our time here," Clement said.

"I tried to explain to the rookie about saving money," joked Kenjon Barner. "And the first thing he does is buy a Xbox."

Smallwood's response: Going to keep us in the hotel rooms and away from the outside distractions. Brandon Graham also admitted he's doing the same as the young running backs.  [247sports.com]

Let's just hope they're actually playing and haven't decided to simulate the big game to see what would happen...

Over at ESPN, Tim McManus took a look at the nine offseason acquisitions (that took place over seven days) by Howie Roseman and the Eagles that helped make them a Super Bowl team. You'll have to click over to see what they are, but this little nugget from Tim's intro pretty much says it all:

An amazing pattern emerged during the Philadelphia Eagles' 38-7 throttling of the Minnesota Vikings in the NFC Championship Game, one that held true throughout.

Every Eagles point was generated by a player who wasn't on the roster last season. Nick Foles threw for three touchdowns. Alshon Jeffery caught two of those, Torrey Smith the other. LeGarrette Blount ran one in. Patrick Robinson returned an interception for a score. Jake Elliott kicked a field goal and accounted for the extra points. Newcomers dominated the game, and not just when it came to crossing the goal line. ...

One ring to rule them all

The Eagles are 0-2 in Super Bowls and to say this city is hungry would be an epic understatement.

The magic is definitely with the Eagles this time. They've fought through too many setbacks, relied on so many people and thrived regardless of the circumstances.

"The thing about this team is (with) all the adversity and negativity and everything that surrounds the team, these guys don't listen to that," said Eagles head coach Doug Pederson. "I don't listen to that. They come to work and practice hard every day, and they love being around each other."

The city loves these Eagles for the exact same reason... If the Eagles pull this off, then the championship parade for the Phillies in 2008 -- an event that drew an estimated 2 million people -- will pale in comparison to the Eagles' celebration.  [nfl.com]

A lot was made over the penalty disparity in the AFC title game, but that's nothing new for the Patriots. The same can not be said about the Eagles. And whether you think there's a vast conspiracy at work here or just believe one team is much more disciplined than the other, the penalty margin could be a determining factor in this one. It certainly seems to have played a role in recent years...

New England was awarded 50 first downs via penalty, the most in the league during the regular season. They got six more in the playoffs, tying them with the Minnesota Vikings for the most this postseason. Their net penalty margin (27) and net penalty yard differential (313) rank second and first, respectively, when looking at the 2017 regular season and playoffs combined. The same ranks hold true for New England if you look at those three metrics on a per-game basis. ...

Having the penalty advantage is big, but having it in the Super Bowl is humongous. Since 2002, a team with the benefit of the penalty differential during the regular season won over 56 percent of their games. In the Super Bowl that jumps to a win rate over 73 percent, roughly the same we would expect from a team favored by a touchdown in the point spread.  [washingtonpost.com]

D is for dominant

Jim Schwartz has his defense firing on all cylinders, and that might be the best chance at neutralizing the Patriots biggest advantage at any position: quarterback.

The Eagles surrendered only 17 points these playoffs, with seven of those coming on an 18-yard touchdown drive resulting from a muffed punt.

In fact, they haven't surrendered more than 10 points in any of their last four games, which makes them the first team this decade to accomplish that feat. That hasn't happened since the 2009 Denver Broncos opened the season with four consecutive games with 10 or fewer points allowed.

The Eagles are just the fourth team since the turn of the century to give up fewer than 20 points in their first two playoff games, joining the 2008 Baltimore Ravens, the 2006 Super Bowl champion Indianapolis Colts and the 2002 Super Bowl champion Tampa Bay Buccaneers.

On paper, the Vikings and Jaguars are superior, but it's that hot streak that should terrify the Pats. When the Eagles are at their best defensively, they are dangerous.  [bleacherreport.com]

Adjusting on the fly

Nick Foles is not Carson Wentz, but – thanks to Doug Pederson's ability to adjust his offense over the final few weeks of the regular season – that was hard to tell against the Vikings.

Under both Wentz in the regular season and Foles during the playoffs, the Eagles’ offense averaged over 390 yards per game. But those yards were accumulated in different ways. Before Wentz’s injury, Philly was a balanced team whose aerial attack primarily relied on the power of its quarterback’s arm — often assisted by Wentz’s magician-like ability to improvise and buy time in the pocket. One thing it didn’t do, however, was ask receivers to do lots of work after hauling in the football. Through Week 14, Wentz led the league in touchdown passes per attempt and ranked third in air yards per attempt, according to ESPN’s Stats & Information Group, but his targets were only 22nd in yards after the catch per reception.

Foles connected on three 40-yard passes against the Vikings. But those have been big exceptions to the Eagles’ general approach with Foles at the helm, which has been to throw much shorter. In the playoffs, Foles’s average pass has traveled 7.1 yards through the air. Compare that with Wentz’s average of 9.8 air yards per attempt during the regular season, and you can begin to see how Pederson has shifted his offense’s focus. Forty percent of Wentz’s passes went 10 or more yards downfield, compared with 25 percent for Foles in the playoffs. And Foles has actually thrown a larger share of his passes to players at or behind the line of scrimmage (29 percent) than 10 yards past it.  [fivethirtyeight.com]