What they're saying about the Eagles: Cowboys fans rank Dak Prescott fourth among NFC East QBs

For today at least, we're going to #StickToSports

There, that's the first and only time you'll see the president's name appear in this blog post, because, no matter your political affiliation, if you're reading this then you're likely an Eagles fan. And, in that case, you're probably also much more interested in what's going on down at Broad and Pattison than you are about what's happening at 1600 Pennsylvania Avenue.

Well, the Eagles were at NovaCare on Tuesday for practice and will be available to the media on Wednesday, meaning a whole new round of politically-charged posts will be coming at you over the next few days. In the meantime, we decided to take a look at what everyone else is saying about the Birds, specifically the things that have to do with the actual game of football.

A few weeks back, our own Jimmy Kempski posted something about former NFL scout Louis Riddick ranking Carson Wentz AND Nick Foles ahead of Dak Prescott. In case you missed it, here's a reminder of what Riddick had to say:

How I see the QB’s in the NFC East and WHY I see them that way. It’s all about context...listen closely...#cowboys #eagles

Well, the debate didn't end there, according to SportsDay Dallas:

The debate continued on NFL Live with Josina Anderson ranking Foles as the No. 1 quarterback overall in the division after his Super Bowl win, and similarly sticking Prescott at No. 4.

Then, Darren Woodson stepped in to defend his fellow Cowboy.

So of course Darren Woodson didn’t agree with the positioning of Dak on our #NFCEast #QB rankings because, #Cowboys, yes. Here is Part 3: The post list debate. pic.twitter.com/4hDpra4Rz6

None of that, however is surprising. Nor is it why we're sharing this bit of information with you. No, we're doing that because of the poll that followed.

With over 2,600 votes counted — keep in mind this is a Dallas-Fort Worth website so it's presumably almost entirely Cowboys fans voting — the public has spoken. 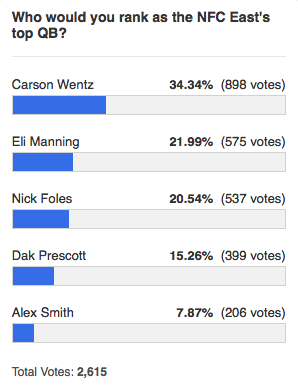 Suddenly, it's not so funny anymore. I'm actually a little worried about you guys. Should we send help?

MVP on the field

Daniel Jeremiah: “He would’ve been the MVP of the league last year. Carson Wentz was playing better football than any other quarterback in the league. They won a Super Bowl with Nick Foles, [but] they don’t even get close to that without what [Wentz] did to get them in that position. You want size? You want mobility? You want arm strength? How about leadership? How about being able to have everything at your disposal at the line of scrimmage? Carson Wentz can do everything. You’re going to see this year, he’s going to come back off of that gruesome injury and he’s going to — he WILL be the MVP in the NFL this year. And when that happens, when they hand him the trophy — he might get another Super Bowl trophy! — I don’t know. But he’s going to win the MVP this year.”  [h/t bleedinggreennation.com]

MVP off the field

Wentz's first charity softball game was a smashing success, drawing a big crowd to Citizens Bank Park and raising over $850,000 for his A01 Foundation. And that was just the start for the Eagles' quarterback.

Another demonstration of that support was on display during the event, as Wentz presented a check for $520,000 to Mission of Hope to help fund the building of a sports complex in Haiti. Wentz opened up a public fundraiser that brought in $260,000, which he matched dollar for dollar.

Also unveiled on Friday was the creation of a food truck called "Thy Kingdom Crumb." Beginning in August, it will begin mobilizing to different sections of Philadelphia to hand out free food.

"The goal is to provide that something different, provide a community atmosphere to just love on people," Wentz said. "I think things [that are] free these days are kind of confusing. There's no strings attached with this."  [espn.com]

Best of the best

There were more than a few memorable moments from this Eagles season – and BLG ranked his top 10. No. 1 won't be a surprise, but since I didn't want to spoil the first couple here, I decided to only reveal his third choice, which was also the first moment I actually believe Birds were bound for glory.

The most impressive throw I’ve ever seen Foles make. He fit that thing in a tight space to Smith, who did a masterful job of selling the fake.

Up 17 points, it’s not even like the Eagles really needed to break this play out. But Doug Pederson dunked all over Mike Zimmer anyway, and it was glorious.

It was pretty apparent the Eagles were going to the Super Bowl after this score.  [bleedinggreennation.com]

Shop 'til you drop

The Eagles recently got some cap space courtesy of Mychal Kendricks' departure. Here's a look at how they might use some of that new money.

If the Eagles do intend to be players in the free agency market again, there are some legitimate options. Former Eagles Corey Graham and Cedric Thornton would be among the easiest additions as they already understand Philly’s system. ‘The Birds’ do, however, have young prospects at safety and Thornton isn’t on anyone’s list as the best defensive tackles in the league.

Here are five options the Eagles may consider:

Vaccaro is one of the remaining free agents who isn’t over 30. At 27, there’s plenty of tread left on the tire, and Philly will love his versatility. He can play both cornerback and safety.  [insidetheiggles.com]