What they're saying: Wentz to resume 11-on-11 drills, Eagles sign wide receiver 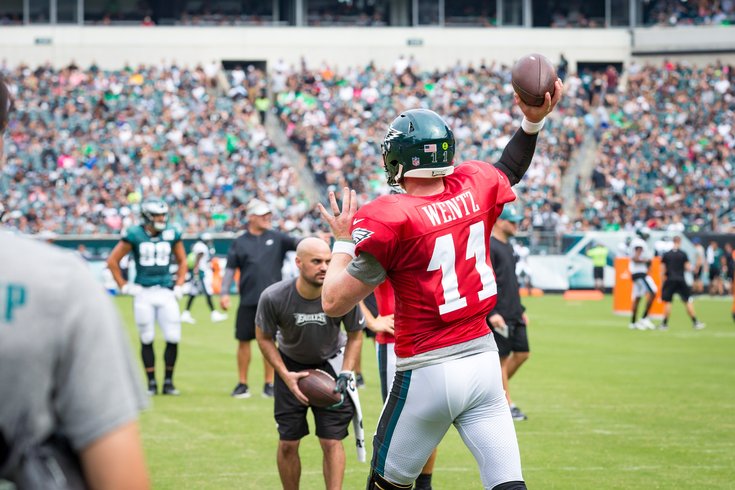 After an ugly performance against the New England Patriots in their second preseason game, the Philadelphia Eagles got some good news on Saturday morning when it was reported that the injury sustained by quarterback Nick Foles on Thursday night is not believed to be serious. Then, a few hours later, there was more good news coming out of the NovaCare Complex.

According to ESPN's Chris Mortensen, Carson Wentz will return to 11-on-11 drills at practice on Sunday. Furthermore, the move is in no way related to the status of Foles' strained throwing shoulder.

Wentz, who saw his participation level in practice rapidly decrease after a strong showing over the first few days of camp, has looked as healthy as can be expected for a guy less than nine months removed from tearing his ACL and LCL. Doug Pederson, Wentz and the rest of the organization has maintained that everything the quarterback has done this preseason has been part of a greater plan, and not a reaction to any one day of practice.

In other words, they've been playing it ultra-safe with Wentz, but it appears they're ready to loosen the leash a bit heading into the third preseason game. And that's where we'll start today's edition of What They're Saying...

Wentz was given the green light after meeting with the team's medical staff and coach Doug Pederson, among others, a source said.

It is not a surprising development, inasmuch Wentz said Tuesday he hoped to return to 11-on-11 work and Pederson acknowledged a decision was forthcoming.

Wentz's progression is not a response to backup Nick Foles' shoulder strain suffered in Thursday night's preseason game against the Patriots, sources said. Foles' injury is not serious, and he still could practice some this week.  [espn.com]

The Eagles made a roster move on Saturday, adding former ArenaBowl MVP Darius Prince, who earned All-Arena honors last season with the Soul, his first full season in the AFL. He led the league with 89 receptions and finished with 1,076 yards (2nd in AFL) and 24 touchdowns (3rd). Interestingly enough, the 28-year-old receiver didn't play college football. But he certainly doesn't look like it...

Just another catch...
Darius Prince with 7 rec, 70 yards and a TD on the day for the Soul vs Balt.#RoadTo3Peat // Next Home: This Saturday, 7:30pm, @WellsFargoCtr pic.twitter.com/dLkZGZDqbQ

The Eagles waived defensive tackle Adam Reth to make room for Prince on the roster.

The 6-1, 185-pound Prince is 28 years old. He didn't play college football. Instead, he was a basketball player, first at Penn State-Greater Allegheny then at Penn State-Beaver where he averaged 12.7 points per game in 2011.  [philadelphiaeagles.com]

Offensive linemen typically aren't the first names you check on when reading 53-man roster projections. But I can't help but be intrigued by Australian rugby star — and soothing vocalist — Jordan Mailata. And my man Brandon Gowton over at BGN has him making the roster.

The starting five is obvious. The Eagles will hope that they don’t have to see Big V play much this year because, although he can fill in adequately at times, he can also have some really bad outings. Vaitai really struggled against the Patriots, allowing three sacks and even more pressure. It’s his lack of blocking that got Foles injured. You don’t want to see Wentz getting blindsided in the regular season. I wonder if Pryor would get in at guard over Seumalo. The rookie sixth-round pick has impressed. Check out a clip of him dominating below. Mailata can be stashed away deep on the roster since the Eagles have a number of players who can play tackle over him. The notable absence here is Chance Warmack, who the Eagles should look to trade for at least a conditional seventh-round pick so they can save $1.65 million in cap space.  [bleedinggreennation.com]

Obviously the 0-2 preseason record is meaningless, but apparently Thursday night's preseason matchup wasn't entirely meaningless for one of the team's involved.

The Eagles didn’t care about this game. Sure seemed like the Patriots did.

Doug Pederson has nothing to prove in August. Not anymore.

So for the Eagles, these games are to get long looks at the young guys, to experiment with players in various positions and groupings, to get veterans work when they need it, and to prepare for the regular season.

Things can look pretty ugly in preseason football when you’re not trying to win.  [nbcsports.com]

Can't imagine why the Pats would have a little extra motivation for that one...

Dale Robertson of The Houston Chronicle tried to predict which QB would be the best in five years (2023).

I've got to tip my hat to BGN's Brandon Gowton for bringing this piece to my attention, however, I can't help but think he buried the lede here. Wentz being listed No. 1 here is hardly the biggest surprise; I think that comes in down near the bottom of the Top 10...

1. Carson Wentz, Eagles – His body of work to date speaks for itself. He was on his way to a possible, even likely, MVP season in 2017 when he went down with a knee injury of his own.

8. Nick Foles, TBD – Foles likely won't make the list in five years if he remains an Eagle, but he won a Super Bowl when afforded the opportunity.