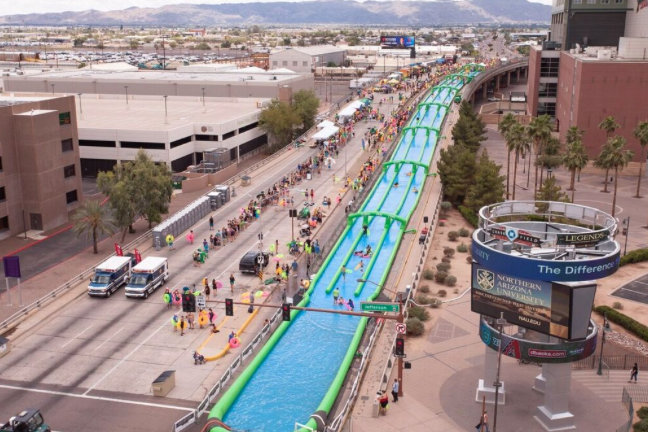 A giant waterslide, like the one pictured, was supposed to come to Philadelphia in August.

For the second year in a row, there will not be a 1,000-foot water slide coming to Philadelphia.

But why was the plug pulled on the midsummer event in Fairmount Park?

It just depends who you ask, and not everybody's talking. But emails obtained by PhillyVoice fill in some of the blanks.

What's known for sure is that officials with Slide the City, the company planning the event, announced in a May 11 press release that the slide was coming to town Aug. 6. "Sedgley Way will be transformed into the biggest block party of the summer," the release began.

The Salt Lake City company promised that "along with the one-of-a-kind slide, the block party will include food, music, local vendors and street entertainers."

That vision of summer fun in the water began to circle the drain on Tuesday, however.

Unhappy about what they called a premature announcement of the event, representatives of City Councilman Bobby Henon's 6th District office said they could no longer endorse it.

Slide the City then released a follow-up statement Tuesday, calling for a solution to the issues holding up the proposed event.

However, it became apparent Wednesday that the rancor was sufficient enough that the plan was dead in the water.

In one email, Henon chief of staff Courtney Voss told Chris Conran, director of Slide the City, that "if the city calls you, don't take the call or tell them you're working with Councilman Henon to address the situation." In another, Voss tells Conran: "I need to figure out exactly how much trouble my boss and I are in...."

In an interview with PhillyVoice, Chris Conran, director of Slide the City, said his organization didn't know until Tuesday this week that the Sedgley Drive location was not available on Aug. 6. In fact, Conran said, he was told by Henon chief of staff Courtney Voss before last week's press release came out that everything was "99 percent" ready. After hearing that, Conran said he didn't throw up any "red flags" to the company's public relations team, which sent out the May 11 announcement as a matter of course.

The company would have done the same thing in any city, he said.

"I was going off of what Courtney said," Conran said. "We were under the impression that everything was good to go."

He said that in many cities – he pointed to Tulsa, Oklahoma, as an example – the company needs to acquire "contingency permits" which allow them to plan for their events while permits are being finalized. He said he believed that's what was happening in Philadelphia.

"That's what confused me. If there was already a day reserved (by a previous event), if I go to Tulsa or someplace like that, they would tell me that the next day," he said.

According to Conran, Slide the City presents events at 150 locations each year, and he was surprised at the hurdles he faced getting permits in Philadelphia.

"I was told in the past that Philadelphia is a political city and you need to know someone to get something done," he said. 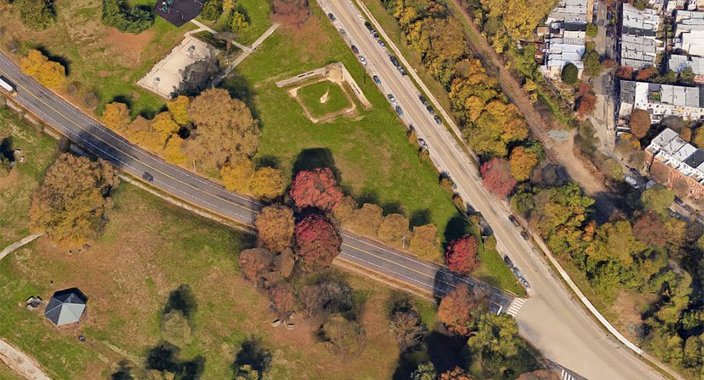 The water slide was proposed for Sedgley and Poplar drives in Fairmount Park, but the location had already been booked by five different groups on August 6, according to a city spokeswoman.

Ultimately, the permits for an event in Fairmount Park would need to be approved by the city's Department of Parks and Recreation.

But Conran suggested that process would go more smoothly by submitting paperwork – which it did on Feb. 12 – to Playworks, a national nonprofit organization that was to be a partner in the event, and Henon's office.

Playworks, a national nonprofit organization, provides trained, full-time coaches focused on recess to hundreds of low-income schools in major urban areas. Henon sits on the board of directors of Playworks Pennsylvania.

A Department of Parks and Recreation spokesperson directed questions about the permits to the mayor's office.

According to Lauren Hitt, spokeswoman for Mayor Jim Kenney, the Parks and Recreation department has no record of any request for a permit for the event.

In fact, she said Wednesday, the department didn't even know of any plan to bring the slide to Philadelphia until Slide the City issued their press release last week.

"They (Parks and Recreation officials) weren't aware of their interest until Slide in the City announced it last week, at which point Parks (and Rec) communicated to Henon's office that (the location) was unavailable at that time and date," she wrote in an email. In fact, Hitt said, the location – Sedgley and Poplar drives in Fairmount Park – had already been booked by at least five different parties.

So what happened to the application?

Voss declined to comment for this story, but a representative from Henon's office said they were initially championing the event in the hopes of letting underprivileged children use the slide – at no cost to them – on the Friday before the event. Henon was planning to underwrite the $30,000 cost of the slide and transportation for the children, but hoping to attract a sponsor to help cover the expenses.

Asked about the submission of the paperwork, Henon's office would not comment on when – or if – any paperwork was ever submitted to Parks and Recreation.

In series of emails about the event, obtained by PhillyVoice, plans seemed to be moving forward until Slide the City's announcement last week.

After the release of the statement, however, Voss emailed Conran, telling him that "if the city calls you, don't take the call or tell them you're working with Councilman Henon to address the situation."

In another, Voss tells Conran, "I need to figure out exactly how much trouble my boss and I are in...."

Henon's office acknowledged the emails, saying a number of city officials were caught off guard by the announcement and Henon staffers were working to smooth things over.

But the request to keep quiet about working with Henon's office? That was a typo, a Henon representative claimed.

Up until the moment the initial announcement came out, Henon's office said it was planning a meeting to find a new location for the event.

But in the aftermath of last year's failed attempt to bring the water slide to Philadelphia, Slide the City shouldn't have been working through intermediaries to get their permits in the first place, Hitt said.

According to Hitt, the company was told last year that any requests for a future event would have to be made directly with the Department of Parks and Recreation – by January.

That didn't happen, she said. 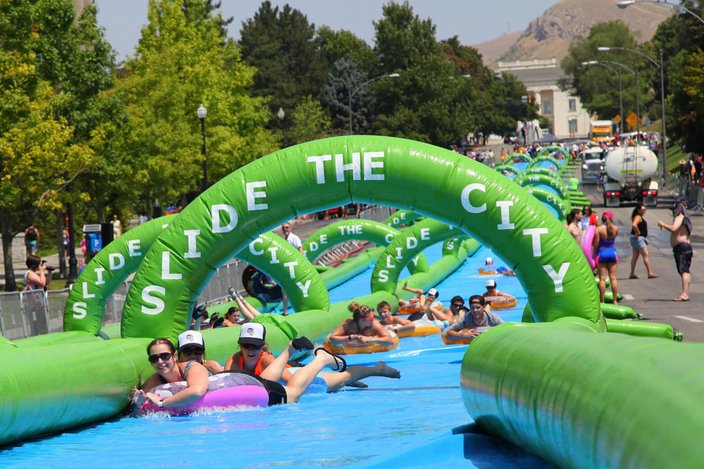 Plans for Slide the City Philadelphia are in limbo because of delays in getting the permits from the city, organizers said Tuesday.

According to Conran, a Slide the City franchise handled the failed event last year and that person was no longer with the company.

"I have no idea what happened last year," he said.

Conran said he also had no idea the Philly event wasn't going to happen until Tuesday.

When he found out, Conran said he offered to cover the nearly $30,000 cost of the Friday event for underprivileged children. "I figured we'd bite the bullet and just pay for the whole thing," he said.

In the emails, however, Voss told Conran that Slide the City would have to take several steps to walk back statements in the initial announcement if they wanted support from Henon's office.

Among the demands, Voss requested Slide the City remove Philadelphia, and corresponding sign-up and location information, from its website.

In an email sent last Wednesday, hours after the press release came out, Voss told Slide the City that while plans for the event had been about 99 percent, she was no longer sure that was still the case.

If Voss was on the fence about the event last Wednesday, a day later, she was certain.

In an email to Slide the City last Thursday, Voss said flatly "the City and its partners have determined that we cannot move forward."

Conran, who was a recipient of that email, replied to ask if there was any chance to save the event. In his reply, he noted that information about the no-longer-available Philadelphia date had been removed from its website.

"Philadelphia is no longer on the site as a potential location," he wrote.

Yet, as of Thursday morning, the site still included Aug. 6 as the date for Slide the City in Philadelphia, though the page indicates that tickets are not on sale.

Still, Conran said, he hopes to bring the slide to someplace close by. He said he wasn't ready to announce just where, but he's working on another location just outside of the city.