Has plan for Philly's 1,000-foot-long water slide dried up? 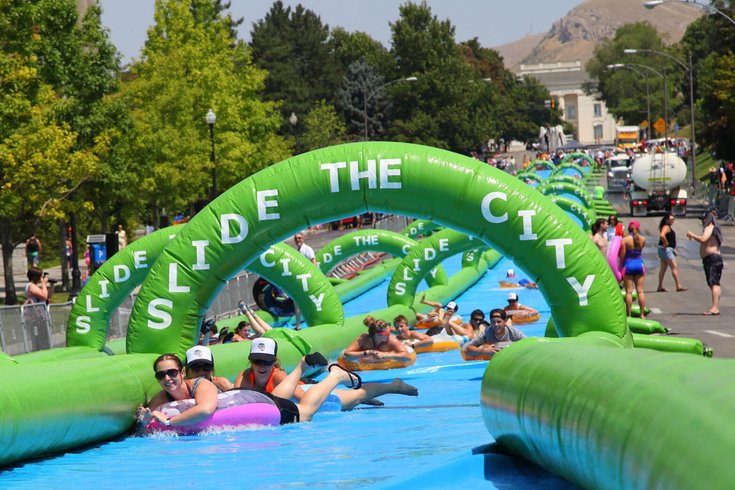 Plans for Slide the City Philadelphia are in limbo because of delays in getting the permits from the city, organizers said Tuesday.

The plans for a giant water slide in Philadelphia might have just dried up.

Officials with Slide the City, the company working to bring a 1,000-foot-long water slide to the Art Museum area, say they have encountered obstacles to gain the permits to stage the event on Aug. 6.

Slide the City organizers said in a statement that they were working with the office of City Councilman Bobby Henon (D-6th) and were told "based on written communication from Councilman Henon's office...that permits were 99 percent complete."

But Slide the City never obtained the necessary permits in place to present the proposed event.

In a conference call with the city, Slide the City organizers asked why the permits were held up and were told the location, Sedgley and Poplar drives in Fairmount Park, was already booked for another event on that same Saturday, the statement noted.

Slide the City claims it was told by a representative from Henon's office that "after much discussion about Slide the City’s event, the City and its partners have determined that we cannot move forward with it."

Henon indicated he no longer wanted to be involved in permitting the event because of a press release distributed last week announcing the event's intentions to come to Philadelphia, Tuesday's Slide the City statement noted.

“If the only reason the event does not take place is because we sent a press release announcing that the event was coming to Philadelphia, I hope we can resolve that issue,” Slide the City public relations manager Amy Gessel said in the company's statement.

According to Jolene Nieves Byzon, a spokeswoman with Henon's office, the press release became an issue because Slide the City released it with incorrect information before any permits were finalized.

But while Henon's office sought alternative sites, she said, Slide the City sent out the announcement.

In that release, Slide the City said it was working closely with Playworks, a national non-profit organization, to bring the event to Philadelphia and planned to offer a free day of slides for underprivileged youth on the Friday before the planned date of the event.

The day of free slides for underprivileged children was the reason Henon's office was advocating for the event.

But while the slides would have been free for the children that Friday, Slide the City wasn't donating use of the slide. Instead, Nieves Byzon said, the $30,000 cost of the Friday event for underprivileged children was to be underwritten by Henon's office. That expense included $20,000 to rent the slide and $8,000 to hire buses to take children to the event, she said.

"This would have been really neat and different," said Nieves Byzon.  "We were really looking forward to bringing it to them [underprivileged children]."

Yet, even after this, Henon's office tried to work with the group, she said, asking Slide the City to update last week's press release to note that permits were not yet secured and the press release was shared prematurely.

But, that didn't happen.

"We are not interested in being the advocate for this event that we were," said Nieves Byzon on Tuesday.

The water slide was scheduled to come to Philadelphia last summer, but the company canceled the visit. It made a visit to Allentown.

According to the press release, the organizers are still hoping to bring the event to Philadelphia this summer.

“It’s unfortunate we are running into issues bringing this one-of-a-kind event to Philly for the first time,” Slide the City event director Chris Conran said in the statement. “If the date and venue were already spoken for, we would have liked to have known on February 12th when we submitted the permit application.”

“There has been a lot of confusion to say the least,” Slide the City co-founder John Malfatto said in the news release. “We have been in contact with Councilman Henon’s office since the end of March. Councilman Henon is a Playworks supporter and has been an advocate for the event."

With more than 25,000 people on the waiting list for the event, Slide the City officials said that they hope the issues can be resolved.