When will the Sixers finally get their first win?

And will it come before the Warriors first loss of the season? 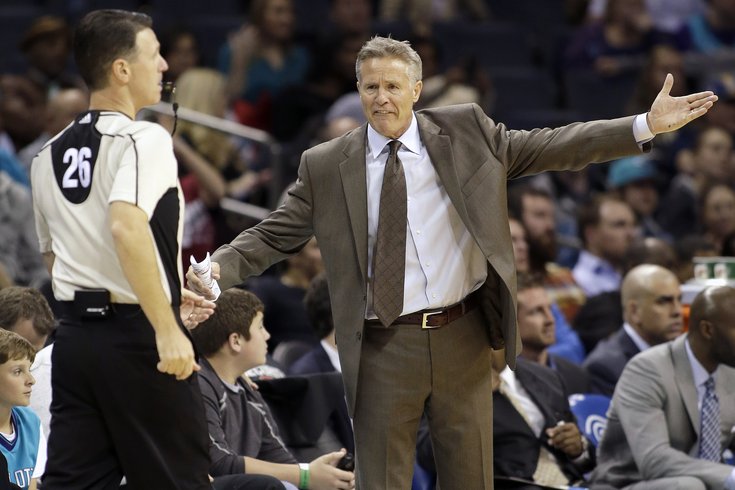 As you may have heard by now, the Philadelphia 76ers made a bit of history on Friday night, becoming the first team in major American pro sports to lose 27 consecutive games.

Meanwhile, the Golden State Warriors set a record of their own -- the most consecutive wins to start a season (17). That got me thinking: What will happen first, a Sixers win or a Warriors loss?

According to Zach Harper of CBSSports.com, Vegas oddsmaker Bovada has set a line on that. And, surprisingly, the Sixers are actually favored to snap their streak first. Here's a look at how Bovada sees it:

But that begs the question: When will the Sixers finally win?

Fortunately for Philly fans anxious to see their basketball team come out on top for a change, their next 10 games feature some very winnable — or as winnable as they get for this team — matchups -- heck, they're even favored by a point against the Lakers on Tuesday. But that’s to be expected when your team hasn’t won a game since March and just set the NBA record for consecutive losses.

In case you're wondering, the Sixers and Warriors don't meet until January 30 -- or game 47 of the season -- so it's highly unlikely both streaks will still be active when they play. But let's not get ahead of ourselves. Here's the Sixers upcoming schedule.

If you want to look on the bright side, something’s got to give sooner or later, right? Here’s a look at the Sixers upcoming schedule, ranked by how likely they are to win each game.

Why they might win: This will be the Spurs' fourth game in six days, so perhaps coach Greg Popavich decides it's a good night to rest some of his veteran starters, especially with his former protege, Brett Brown, going up against him in desperate search of that first win. But even for the game to be competitive, Pop would likely have to sit Tony Parker, Tim Duncan, Kawhi Leonard, and Lamarcus Aldridge -- basically all his best players. I don't see that happening.

Why they might win: The Bulls are ranked 25th in the NBA in shooting percentage and aren't a great rebounding team. And while they turn the ball over less than any other team (14.1/game), they also struggle at creating turnovers (13.1/game). One of the Sixers big problems this season has been turnovers, so if they can protect the ball and get hot shooting -- which won't be easy against a Chicago defense that ranks second in opponent FG percentage -- they have at least a chance of getting lucky in Chicago. However, the fact that the Sixers will be playing on the second leg of a back-to-back doesn't bode well for them.

Why they might win: The Sixers lost to the Raptors by 16 at home earlier this month, so there's not a whole lot reason for hope here. Toronto will be in the middle of a stretch of three games in four days, but so will the Sixers. But with a date against potential MVP candidate Paul George and the Pacers the following night, perhaps Kyle Lowry and the Raptors look past the Sixers. It's not much, but at least it's something.

Why they might win: The Grizzlies aren't as good as some of the best teams in the West -- like the Warriors and Spurs -- but they certainly aren't a bad team. However, when you look at their offensive and defensive ratings, they may not be as good as their 9-8 record suggests. Against current playoff teams (the top eight in each conference), the Grizzlies are just 4-7. But the Sixers are the farthest thing from a playoff team, and Memphis has won six of its last eight games. And against teams that have struggled this season, the Grizzlies have taken care of business. They're last loss to a team outside the league's top 16 came on November 5 (at Blazers).

Why they might win: After starting the season 7-1, Atlanta has won just four of its last 10 games. The main thing to hang your hat on with this matchup is that the Hawks have recently lost to the Nets, the Eastern Conference's second-worst team. And if you can lose to them, you can certainly lose to the Sixers.

Why they might win: This game would likely be higher on my list if the Sixers weren't playing it on the second leg of a back-to-back, while the Knicks will have had two days of rest prior to their meeting at The Garden. Still, the Knicks have lost three straight after winning their previous four games, and the Sixers might be facing them at just the right time.

Why they might win: The Pistons have been in free-fall since starting the season 5-1. In their last 10 games, they are just 3-7 and even lost by double digits to the Lakers, whose only other win this season came against the 3-12 Nets. If they don't win before they host Detroit, this is certainly one in which they'll have a chance.

Why they might win: This is where the games start becoming much more winnable. After winning four of five games, the Nuggets have lost five straight. Now, they embark on a five-game road trip that concludes in Philadelphia against the Sixers. Given that the game comes at the end of a long trip, maybe the Sixers will catch a tired Denver team and pick up a win.

Why they might win: The Nets aren't much better than the Sixers, even though they have three more wins. Furthermore, one of the Nets losses came against the Lakers, who are one of the two teams with a worse record.

Why they might win: For the first time this season, the Sixers will be playing a team that has lost almost as many games as themselves. If they stick to the gameplan -- and I hope this is their strategy -- and let Kobe take as many shots as he wants, I actually think this is the one in which they finally get that first win. And the best part is, you won't even have to wait that long, as the Lakers come to town on Tuesday.

And now that we've gone through all of that, let's reexamine their schedule, with the totally arbitrary odds I just made up so you know when it might be worth tuning into a broadcast.

Of course, it's totally possible the Sixers lose all 10 of these games...