Where is the worst coffee in Philadelphia? One data blogger has the answer

When Dan and Lynsey Larson relocated to Philadelphia from Delaware earlier this year, they had some major priorities to sort out: real estate preferences, best commute options, schools for their kids.

None of these decisions could be rightfully made without a caffeine-fueled mindset, and so the couple, known to their followers for extensive blogging about using data in their parenting methods, sought to create a map of where to find the very best coffee shops in Philadelphia.

They didn’t stop at simply using Google, however. Instead, Dan Larson used data from Yelp ratings and transferred the findings to a map that outlined which neighborhoods are the best – and the worst – for a good cup of coffee.

After extracting Yelp records from no less than 816 coffee shops in the city (including 94 Dunkin Donuts and 48 Starbucks), Larson mapped out their locations using Phillyhoods.net and transferred the info to a Tableau dashboard. 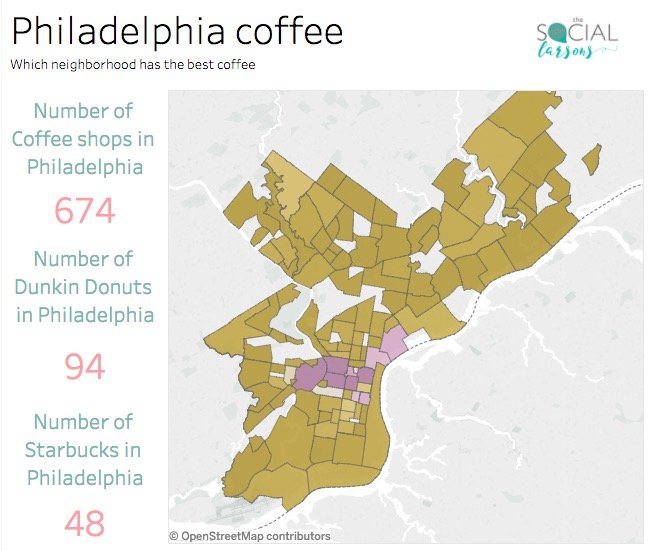 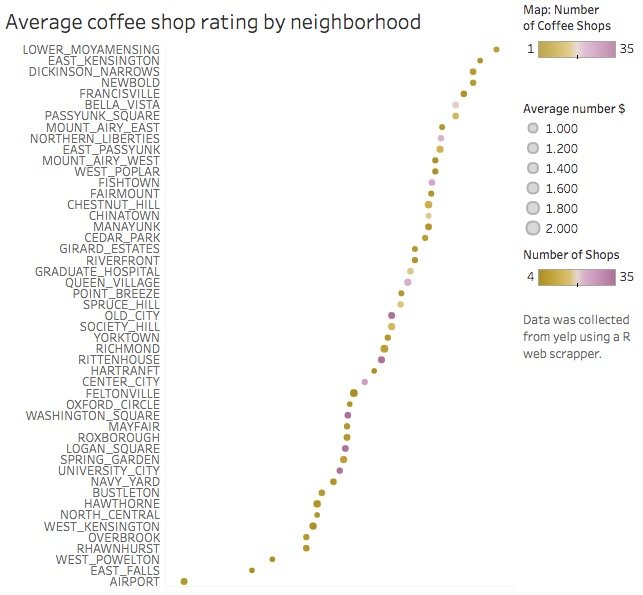 University City, Old City and Rittenhouse were among the neighborhoods most populous with coffee shops. Fishtown and Northern Liberties also offer a respectable amount.

Neighborhoods most highly ranked for their coffee include Mount Airy, with an average rating of more than four stars for the region. Passyunk Square, Fishtown, Northern Liberties, the Riverfront and Powelton also all hover in the four-star range.

The worst-rated coffee in Philadelphia? That’s coming from Franklin Mills and the airport, the data shows.

“There’s a ton of information and conclusions you can gather from this viz,” Larson wrote in a blog post. “Now that we have these data, I am excited to dig in and start analyzing… and sipping.”