Which Eagles players are deserving of Pro Bowl recognition? 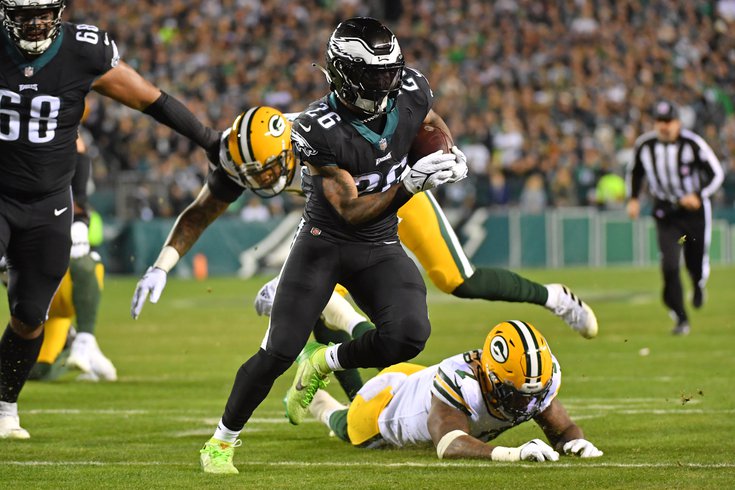 Miles Sanders is probably a longshot for the Pro Bowl, but maybe he deserves some consideration.

Through the first three months of the season the Philadelphia have won 10 games, and only lost 1. They are a good team, and many of their players have also been, you know, good. #Analysis. Let's take a look at which players have been good enough to warrant Pro Bowl consideration, for those of you who care about that.

• C Jason Kelce: Even at 35 years of age, Kelce can do things athletically on the perimeter and down the field that no other center in the NFL can. He is a weapon in the run game, and he rarely gives up pressure in the passing game. Again, it's less a question of whether or not Kelce makes the Pro Bowl. It's whether or not he's first-team All-Pro for the fifth time in his career.

• RT Lane Johnson: Johnson is one of the most underappreciated players in the NFL, and he somehow got snubbed for the Pro Bowl last season, so who knows. But very clearly, Johnson is an elite player, and there should be no question about his Pro Bowl worthiness.

• CB Darius Slay: Slay has three interceptions this season, like he did a year ago when he made the Pro Bowl, but he has become more of a lockdown corner this season. According to pro-football-reference.com, Slay has allowed 31 completions on 57 targets (54.4%) for 352 yards (6.2 yards per target), and 1 TD vs. the aforementioned 3 INTs, for an opposing QB rating of 57.1. He has also perhaps tackled better this season than he ever has, as he has 37 tackles vs. just 3 missed tackles.

• S Chauncey Gardner-Johnson: Prior to his injury, Gardner-Johnson was a lock for the Pro Bowl, as he still leads the NFL in INTs, with 6. Maybe some dopes will keep him out because he's going to be out for a while?

Could go either way 🤷‍♂️

• TE Dallas Goedert: Goedert was heading toward lock status until he got hurt. He's still second in the NFC in receiving yards (544), but some other tight ends could narrow that gap or overtake him over the next couple or weeks. Guys like George Kittle have more name recognition, even they haven't had a better season than Goedert.

• RB Miles Sanders: Sanders is second in the NFC in rushing yards (900) and he's third among running backs with 8 rushing TDs. Where he's hurt is a lack of receiving yardage, as he has 15 receptions for just 60 yards.

• LB T.J. Edwards: Edwards has been great for the Eagles this season, but his numbers probably aren't good enough to get to the Pro Bowl. He is fourth in the NFC in tackles (103), and he has also chipped in 2 sacks and 5 pass breakups. He does not have any INTs or forced fumbles, or much name recognition nationally.

• CB James Bradberry: Bradberry has 3 INTs, including a pick-six, and he's tied for third in the NFC with 12 pass breakups. It'll be hard to get two Philly corners in, though, with so many other big-name NFC cornerbacks.

• LS Rick Lovato: Lovato has thrown the ball through his legs with speed and precision this season, I suppose.