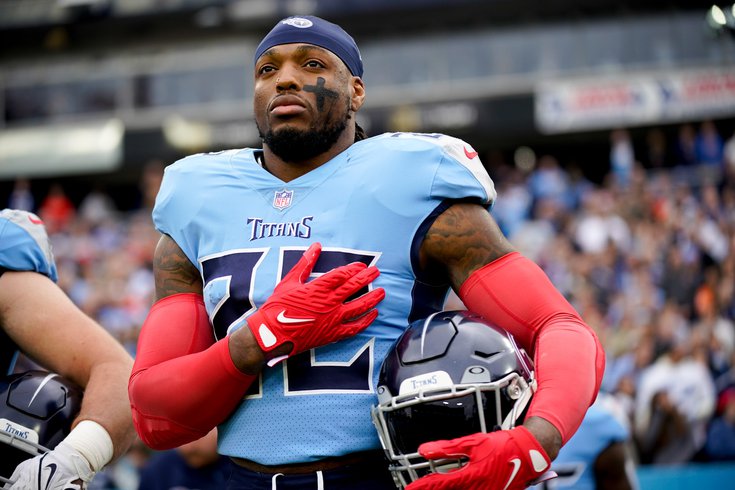 The Philadelphia Eagles have a tough opponent this Sunday in the Tennessee Titans, a team that earned the 1 seed in the AFC seed a year ago, and is almost certain to repeat as AFC South champs. Here are our five matchups to watch.

1) The Eagles' rushing offense vs. the Titans' rugged run defense

As we noted in the Hierarchy this week, the Eagles are arguably running the ball better this year than they were a year ago, when they were the No. 1 rushing offense in the NFL:

On Sunday, it will be strength on strength, as they'll face a very stingy Titans run defense:

The Titans are widely regarded as one of the most physical teams in the league, and that comes from head coach Mike Vrabel, whose personality has trickled down to his players.

"This is a tough, physical football team," Nick Sirianni said on Monday. "Really take after their head coach, Mike Vrabel is a tough, physical -- I was on a staff my first job in the NFL, Mike Vrabel was the captain on the Kansas City Chiefs. Man, I couldn't say more good things about him as a player, and I know -- I've obviously never coached with him, but the way he led as a football player on that team, coming from a great Steeler team and Ohio State teams and back to when he went to Walsh Jesuit, then being on those Patriot teams, that guy knows how to lead people and lead men.

"So that's on full display. It was on full display as a young coach where I learned a lot from him as that goes and what a captain is supposed to look like; now it's on display from him as a coach. So, I like to say just first and foremost, he's a damn good football coach and he's going to have those guys ready to go.

"My early studies on them is that I'm seeing a lot of the things I saw when we played them when I was with the Colts. [Jeffrey] Simmons, he's a really good player. Plays at a very high level and still playing at high level. I was with Denico Autry with the Colts, and he's a really good player. Really tough player. Again, fits that mold of what Tennessee bases themself off of."

Sirianni didn't mention LB David Long, who is having a Pro Bowl type of season, with 85 tackles, 2 INTs, and 5 pass breakups. He too is a big factor in the Titans' run defense success.

It's probably also worth noting that old friend Jim Schwartz is a senior defensive assistant with the Titans. If you'll recall, his M.O. in Philly was to stop the run first and foremost, make the opposing offense one dimensional, and then get after the quarterback. This Titans team plays that way.

2) The Eagles' wide receivers vs. the Titans' young cornerbacks

The Titans have spent a lot of draft capital on the cornerback position over the last three years.

Farley has a herniated disc in his back, and his season is reportedly over. Fulton, Molden and McCreary are the starters.

McCreary, the rookie, has been the most picked-on corner in the Titans' secondary. He has allowed 49 completions on 71 targets for 552 yards and 4 TDs this season, for an opposing passer rating of 104.9, according to pro-football-reference.com. I suspect the Eagles will also try to test Molden, who has spent most of the season on injured reserve with a groin injury, and has only played in two games so far this season.

It's a young, promising group, but it's also a work in progress that A.J. Brown, DeVonta Smith, and Quez Watkins should be able to take advantage of. Oh, and by the way, while Brown won't admit it this week in the leadup to this game, he'll have extra motivation playing against his former team.

The star of the Titans secondary is Kevin Byard, who has 24 career INTs. "You always got to be aware of where he is on the football field, because he can make you pay at any moment with him being around the football," Sirianni said.

3) The Eagles' offensive line vs. the Titans' pass rush

When the Titans are successful getting stops in the run game and put offenses in long downs/distances, they can pressure the quarterback. Sirianni mentioned Simmons and Autry above. Simmons (6.5 sacks) is basically Fletcher Cox in his prime. He is an elite DT, and one of the most under-appreciated talents in the NFL, while Autry (7 sacks) is sort of a late bloomer at 32 years of age, but he is a big (6'5, 285-pound) DE with inside-outside versatility. Autry missed the Titans' Week 12 game against the Bengals, so his status for Sunday will be worth watching.

And then there's Bud Dupree, who has battled injuries this season, but is a the type of speed rusher who could give Jordan Mailata fits. Dupree's athletic measurables:

And then, again, there's Long, who somehow doesn't have any sacks this season, but is a very good blitzer.

Overall, this is probably the best front seven the Eagles will face this season.

Duh. I assume you've heard of Derrick Henry? He's kinda good. Big, super physical, and fast. Through 11 games, Henry has 1,048 rushing yards and 10 TDs, and the Titans' offense remains one of the most run-heavy units in the NFL. Here's a look at their run percentages since Henry entered the NFL in 2016:

If you've been paying attention to the Eagles' 2022 season, you know that the biggest nitpick from fans and the media covering the team in a 10-1 season has been their run defense. Last Sunday night, when 6'0, 247-pound A.J. Dillon got opportunities to run the ball, he was effective, carrying 8 times for 65 yards and a TD. Dillon is similar to Henry in that he is a big, physical back, but to compare the two players is like comparing, ohhhh, sayyyyy... Boston Scott to prime Darren Sproles.

In Week 12, the Bengals held Henry to 38 yards on 17 carries, and Jonathan Gannon was asked how they did it.

"They played well as a unit together," Gannon said. "You talk about they kind of bottled him up pretty good. Run defense, it's all 11, and they were fitting very well together. I thought [Bengals Defensive Coordinator] Lou [Anarumo] did a good job of changing up the spacing, their defensive coordinator. They have a good front, just like us.

"They controlled the line of scrimmage for the most part and didn't let them get going. Then as you see, they possessed the ball on offense, so they kind of limited his touches there. It was really a low-possession type game that game, which Sunday night was a high-possession game. You just don't know how the game is going to kick out.

"I think they played complementary football, Cincinnati. Kept them off the field and had some extended drives, and when he did get his touches, they did a good job, all 11, to really bottle him up and control the line of scrimmage and tackle him.

"I've played against this guy multiple times being in that division for three years with him, and he's a tall order. He's one the premier players in the world at his position, so we have our challenge cut out for us."

There have been some games in which the Eagles' clear objective should have been to stop the run, but somehow wasn't, like against the Texans a few weeks ago. It can't be more obvious this week what Gannon's focus should be.

The Titans low-key have a troublesome offensive line. It currently looks like this:

The offensive tackles are problematic for the Titans. At LT, the Titans lost Taylor Lewan for the season with a torn ACL, and Daley has filled in. PFF has Daley down for six sacks allowed this season. At RT, Petit Frere is a third-round rookie who has been up and down.

The Eagles should be able to attack the edges with Haason Reddick, Josh Sweat, Brandon Graham, and uh, maybe Robert Quinn will join the party at some point.

But again, the Eagles have to earn the right to take advantage of the Titans' tackles by first stopping the run.