Across the United States, propaganda distribution more than doubled in 2019 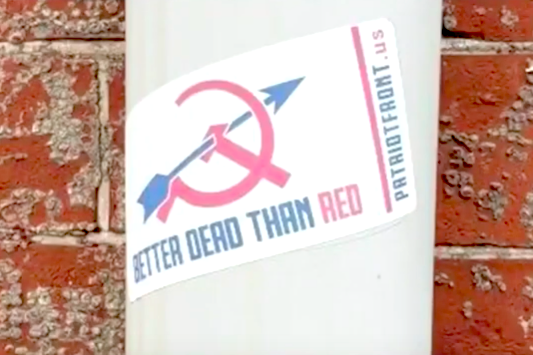 This sticker belonging to white supremacist hate group Patriot Front was found outside a lawmaker's office in Pittsburgh, Pennsylvania in 2019. Reports of white supremacist propaganda more than doubled across the United States, according to the Anti-Defamation League.

New Jersey ranks among the states that see the highest amount of white supremacist propaganda, according to a report released Wednesday by the Anti-Defamation League.

The ADL documented 143 incidents last year in New Jersey – the fifth-highest total in the United States. It also marked a 250% increase from the previous year.

The New Jersey European Heritage Association claims responsibility for much of the propaganda distributed in the state, according to the ADL. The NJEHA, which began in 2018, is a hate group that espouses racist, anti-Semitic, anti-immigration and white supremacist values. It operates mostly in central New Jersey.

Patriot Front, a well-known white supremacist group based in Texas, also was responsible for much of the NJ propaganda, according to the ADL.

The propaganda spread by these groups included messages like "Reject white guilt," "Diversity means no white countries" and "The New Jersey European Heritage Association wishes you a Merry white Christmas."

In Pennsylvania, there were 74 documented incidents last year, including 26 in Philadelphia. The totals essentially doubled those recorded in 2018, when Pennsylvania had 40 such incidents, including nine in Philly.

Every single state except Hawaii had at least one incident last year, according to the ADL. Joining New Jersey in the top five: California, Texas, New York and Massachusetts.

The ADL's report was supplemented by its ADL H.E.A.T (Hate, Extremism, Anti-Semitism, Terrorism) Map. The interactive tool catalogs a range of hate-inspired incidents, from anti-Semitic incidents to terroristic plots, since 2002.

The map shows 833 hate-inspired incidents in New Jersey between 2002 and 2019. Pennsylvania had 454 incidents.