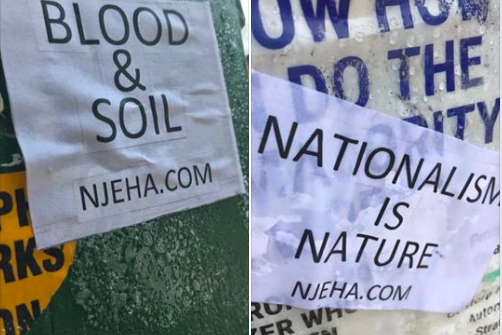 Flyers found in Northern Liberties contained racist messages from a hate group based in New Jersey. The flyers were spotted as the neighborhood prepares for its annual 2nd Street Festival.

Residents in Northern Liberties are working to remove a series of white nationalist flyers that were posted around the neighborhood in the run-up to this weekend's 2nd St. Festival.

Images of the flyers were shared Wednesday in the Northern Liberties Neighbors Facebook group.

"My husband just went to (Palm Street Market) and pulled this trash off the poles on west side of 2nd Street between Brown and Fairmount," resident Amy Sweeney wrote. "Let’s-have a scavenger hunt and get these into the garbage where they belong."

"Stop the 3rd world invasion of America. Build the wall, deport them all," one flyer said.

"Blood & Soil," a third said, while others said, "Reject White Guilt" and "Feminism Is Cancer."

A website listed on the flyers leads to the site of an organization called the New Jersey European Heritage Association.

Neighbors in the Facebook group said they plan to review footage from security cameras near the locations where the flyers were found to try to determine when they were posted and who is responsible.

Similar white nationalist flyers, including KKK recruitment materials, were found around this time last year in the Bridesburg section of Northeast Philadelphia

Philadelphia police said they are investigating the matter in Northern Liberties.