Why didn't Mackanin bench Herrera for lack of hustle? 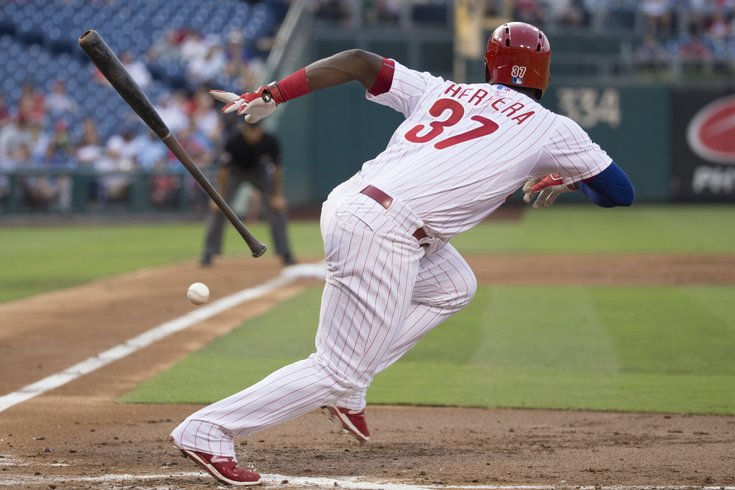 One of the things that stood out in Tuesday's loss to the Rays that didn't have to do with Aaron Nola -- although he was still involved in the play -- was Odubel Herrera's lack of hustle on a ground ball in the fifth inning.

With Nola on first base after his first career hit, leadoff man Herrera hit one right at Rays first baseman James Loney. Known for his speed, the centerfielder more or less walked out of the box and only turned it on once he realized that Loney* was throwing to second base for the force out, rather than stepping on the bag and then going to second.

*Perhaps Loney changed his mind once he saw Herrera dog it out of the box.

And that was the end of the inning for the Phillies, as the Rays turned a 3-6-3 double play.

Under previous managers, Herrera likely would have gone to the bench for the rest of the game. For instance, Charlie Manuel famously benched Jimmy Rollins in 2012 after the former MVP failed to run out a fly ball against the Mets. And there's a good chance Ryne Sandberg would have done the same.

But not interim manager Pete Mackanin.

Herrera headed back out to center field following his very visible mistake. After the game, Mackanin not only explained what happened on the play -- it was what we all assumed -- but also gave a reason as to why he kept Herrera in the game.

"Herrera didn't assume he was going to throw to second base," Mackanin said. "So he quit running, which is something he's got to understand -- that's not the way you play. That's like getting a base hit to the outfield and not thinking about going to second base because he's gonna catch the ball."

So clearly the manager saw his lack of hustle, but decided not to take him out, even with Ben Revere available off the bench.

It's also worth noting that Herrera has been one of the Phillies' hottest hitters recently. He had 21 hits in his previous 51 at-bats (.412) heading into last night's game. Over that span, the 23-year-old Rule 5 pick had six doubles, a pair of home runs, eight runs scored and seven RBI to go with a 1.070 OPS. And with his team trailing 1-0, that's a bat the Phillies could ill-afford to take out of the lineup, even though he finished the game 0-for-3.

But it wasn't his red-hot bat that kept Herrera in the game, although one could argue that the reason he's been hitting so well is tied to Mackanin's explanation of his decision.

"We talked to him afterwards," Mackanin said. "I'm not gonna [bench Herrera] unless it's flagrant. This kid works harder than anybody, he puts in his time and he's a good kid. I like the way he prepares for the game, but he's had a few instances where he's been doing things he shouldn't have done and tonight was one of them.

"I'm not gonna bury him because of that. If it becomes flagrant, that's a consideration."

I actually like this reasoning from Mackanin. If it was a mental mistake made by a young kid and not a conscious effort to take a play off because he's frustrated or upset, then a conversation will likely do more good than the embarrassment of being benched ever would.

Plus, for a team that is miles out of contention, this year should be about learning the game and how to be a professional for some of these young players. Hopefully Herrera learned something last night, because next time, he may not be so lucky.