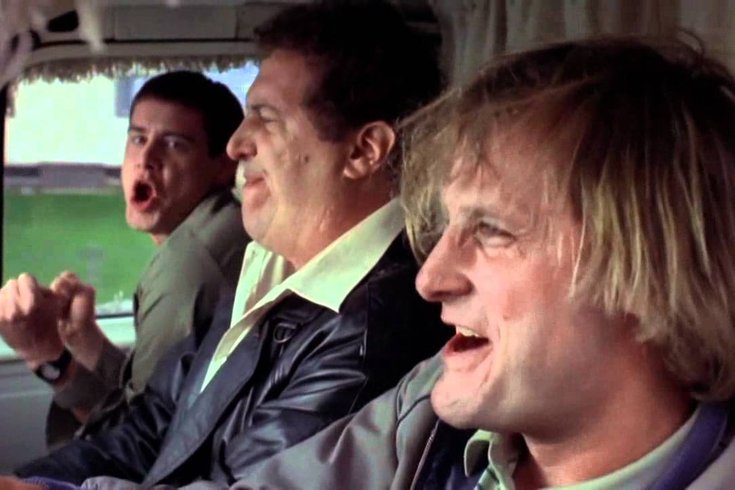 I now, finally, understand what the last three years have been like for Howard Eskin.

The SportsRadio WIP host has been against The Process since the very beginning. While he's not alone in his anti-tank stance, it's easy to see how he can sometimes feel that way, especially with his son, Spike, being on the Board of Directors at Process, Inc.

And as Sam Hinkie's League-of-Shadows-esque makeover continues to pay dividends, it's getting harder for the elder Eskin to find like-minded critics. Even the new regime, which spent lottery night basking in the post-pick swap glow of Hinkie's crowning achievement, can't help but want to kiss the former GM right on the mouth.

This was evident earlier on Tuesday night as well, before the pick swap even happened, as thousands of Sixers fans serenaded Howard with chants of "Trust the Process," under the careful direction of his son, of course, during the Rights to Ricky Sanchez Podcast's Lottery Party.

All this serves as an intro to something I found to be incredibly enlightening when it comes to understanding what life has been like throughout The Process for several different types of people, from those who have been on-board since the beginning to the late arrivals.

And, of course, those who still refuse to see its benefits.

In order to understand why segments of the fanbase and media have remained hostile (some increasingly so), toward The Process, it helps to imagine yourself in their shoes for a little.

You see, Hinkie took some flack for always trying to be the smartest guy in the room, and whether or not he was often depended on who else was in the room with him. Therefore, it's only appropriate that this frame of reference, this window into life in the Eskin household, comes from the place you're least expecting: the 1994 film "Dumb and Dumber."

[Note: This pretty much applies to how any anti-Process person must feel dealing with the ever-growing contingent of Stan Hinkies.]

Don't see the resemblance? Let's do a little play-by-play and see if I can't change your mind.

Lloyd (Jim Carrey) and Harry (Jeff Daniels) are basically Process-trusting Sixers fans who just want to have a little fun. They can represent Spike and his RTRS pod co-host Mike Levin, just to keep the same analogy going. But more broadly, they represent Sixers fans as a whole.

And Joe, the mean old hitchhiker (who is actually a hitman) in the middle played by Mike Starr? That's [insert old curmudgeon newspaper columnist/radio host here].

At first, Lloyd and Harry are just happy for the company. They're so excited, in fact, that a game of front-seat tag breaks out. Joe wants no parts of it, but he can't help it. And when the guys break out into an argument using advanced lingo like triple-stampsies, no-erasies, and "touch blue, make it true" – needless to say, he's seen enough.

Lloyd then offers up "the most annoying sound in the world," which for enemies of The Process may have been the sound of Hinkie saying words like "optionality," "assets" and "optics." That doesn't go so well either.

Nevertheless, the van keeps moving forward, getting closer to its intended destination. Joe begins to think, "Hey, maybe I can make it through this if I just place nice and get something to distract me from all this nonsense."

So what does Howard Joe do next? He asks to turn on the radio, because of course, he does. But Harry and Lloyd have a better idea. Why don't they just provide the entertainment themselves? (You know, like a podcast.)

Their back-and-forth only further enrages their passenger.

In a desperate move, he reaches for his gun, figuring that if he's going down, Harry and Lloyd are coming with. But before Joe can put an end to all their singing and joking – in other words, their fun – they're saved by another, even larger group of people who are looking to get to the same place.

And unlike the last hitchhiker they picked up, this new crew is fully onboard with the fun, singing songs and laughing (and probably sipping Shirley Temples) all the way there. Now heavily outnumbered, Joe can only sit back, pop his antacid and hope he eventually arrives in the right place.

That's why I feel bad for those still railing against Hinkie's agenda.

They're like the hitchhiker who got picked up by a bunch of crazies. They don't get the jokes. They don't want to sing the songs. But they're still stuck in the car, forced to watch others enjoy the ride.

Everyone is trying to get to the same place – an NBA title – but part of that experience is the ride. And not everyone's enjoying this one. Which is a shame, because regardless of where it ends, this has been unlike any road trip I've ever taken.