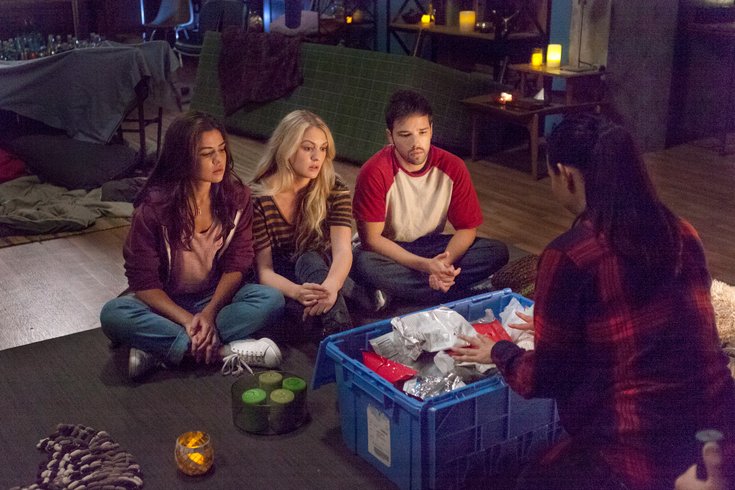 When "Alive in Denver" premieres, likely sometime later this year, don't expect the Philadelphia 76ers references to be in your face or woven heavily into dialogue.

Instead, they'll be more subtle, scattered throughout the eight episodes. But there will be *a lot* of them. This, of course, is what happens when you give a television show to a dedicated Sixers fan and blogger who co-hosts a popular podcast about the team.

"Because I'm an idiot and wanted to have as many Sixers references as I could but also didn't want to have to explain myself, all of them in there were sort of Easter eggs," Mike Levin, creator and writer of the show, told PhillyVoice.

Levin, 27, is based in Los Angeles, where he's slowly climbed his way up in the TV industry as a writer with gigs on "How I Met Your Mother," "The Grinder" and "Trial & Error."

But he was born in Northeast Philadelphia and grew up around Newtown, Bucks County, where he attended Council Rock High School South. To many Sixers faithful, he's known as the former editor and longtime contributor to Liberty Ballers, a Sixers blog on the SB Nation network, where he's written since 2009.

He currently co-hosts "The Rights to Ricky Sanchez" podcast, which he started with SportsRadio WIP program director Spike Eskin in 2013. Levin and Eskin's podcast is largely responsible for "Trust the Process" becoming a rallying cry among fans during the past few seasons of frequent losing as the team acquired young, promising talent like Joel Embiid, Ben Simmons and Markelle Fultz.

The podcast hosts an annual party every May that draws thousands who come not to watch the actual NBA draft, but the lottery process that determines where the team will pick.

So when streaming service Fullscreen picked up Levin's own creation, "Alive in Denver," it had been sprinkled with odes to the team he obsesses over, such as naming a fictional high school Hollis Prep, a nod to former Sixers sharpshooter Hollis Thompson.

"This sounds so self-important, but I really just put them in there for me," Levin said semi-jokingly.

"Alive in Denver" stars Danielle Campbell, who spent three seasons on The CW series "The Originals," and Nathan Kress, who achieved fame as a kid for his role on the Nickelodeon show "iCarly."

The show takes place in the wake of the apocalypse *not* happening. With everyone on Earth convinced the world is going to end, a group of friends get together and spill their deepest secrets to each other. But the meteor never strikes, and they're left with the awkward aftermath.

Levin said the premise compares most closely to the confessional scenes on planes that nearly crash in "Almost Famous" and the "Seinfeld" finale.

The rights to "Alive in Denver" originally were sold to 20th Century Fox, but "it never had any chance of getting made," according to Levin. He kept working his way "up the chain from the inside," co-writing an episode of "The Grinder" on Fox before that was canceled last year.

Levin then landed a staff position on NBC's "Trial & Error," which was renewed for a second season in May. Still, he was trying to get "Alive in Denver" made.

"All the while I was nudging my agent, like, 'Hey, I think this is the only good idea I'll ever have.'"

The show found a home this summer at Fullscreen, a content platform offering a mix of series from YouTube creators and social media influencers, as well as original programming and a catalog of old movies and shows, à la Netflix. "Alive in Denver" will be Fullscreen's first shot at a network-style comedy, according to Levin.

Shooting wrapped earlier in August, and the show is currently in the post-production process. It doesn't have an official release date yet, but it's tentatively slated to debut later this year.

Opining about the Sixers has never been a full-time job for Levin. But eight years of writing things like satirical, scripted dialogue within the team's locker room and defending the long-term vision of former general manager Sam Hinkie helped develop his talents.

"Obviously, it's a different muscle," Levin said. "(But) I think it definitely honed my voice and got me to try and understand or realize what I'm good at or what I’m bad at, what's funny and what's not funny."

As Levin prepares to return to season two of "Trial & Error" and put the finishing touches on his own show, he still has a little trouble believing "Alive in Denver" is a reality.

"It's crazy that it exists, that it's real."