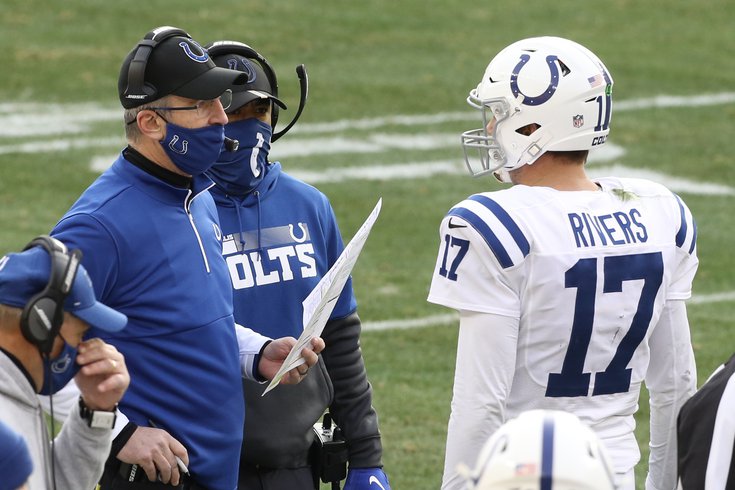 The Colts' playoff performance on Saturday could have meaningful implications on the Eagles' ability to trade Carson Wentz.

For the gambling enthusiasts, here are my Wildcard round NFL playoff picks. To note, the team logos indicate who I think will win the game, not cover the spread. At the end of the picks, I'll note a few teams that I like based on the spread. All the below spreads are courtesy of the consensus odds at TheLines.com.

Colts at Bills (-6.5): The Bills are the second-best team in the NFL, but they'll draw a difficult opponent in the Wildcard round in the Colts. They also got screwed by the new playoff format that no longer gives the 2 seed a first-round bye.

Still, Buffalo is rolling. They have won six straight games, by a total combined score of 229-110. Even in Week 17, when they pulled their starters about halfway through the game, they managed to 50-burger a Dolphins team that was playing for the playoff lives. The Bills should continue to ride that momentum into the postseason.

From an Eagles perspective, this is a very interesting game to watch, in that the Colts are the team that makes the most sense as a potential Carson Wentz landing spot this offseason. If they are bounced in the first round as a result of poor quarterback play, the Eagles will have a better chance of maximizing their return for Wentz.

Rams at Seahawks (-3): There's still some mystery as to whether Jared Goff will play or not on Saturday, but even if he does, how well will he be able to throw the football? It's somewhat surprising that this line is only three points. Certainly it would be higher if John Wolford were definitely starting, right? And even if Goff can go, how much more effective will he be?

Buccaneers (-8) at Football Team: As we noted in the hierarchy this week, the following is what the Eagles' starting lineup looked like in May, after free agency and the draft:

Only 7 of those guys played last Sunday night, and the Eagles still had to pull Jalen Hurts to ensure a loss to the Football Team.

Meanwhile, the Bucs have scored 91 points the last two weeks, albeit against a pair of woeful defenses in the Lions and Falcons. I don't think this game will be the blowout that many think it will be, but clearly the Bucs are the better team and should be able to take care of business.

Ravens (-3) at Titans: The Ravens were the best team in football during the regular season last year, earned the 1-seed, and then in the divisional round of the playoffs... (fart noise).

The Ravens rested their starters last year in Week 17, which felt out of character for a team that actually tries to win preseason games every year to better prepare for Week 1. I do wonder if that played a part in their sluggish one-and-done playoff performance last year.

This year, they're heading into the playoffs playing their best football of the season, as they have won five straight, by a combined score of 186-89. They'll have revenge on their minds, and I believe they'll take down the Titans on the road.

Bears at Saints (-10): This is one of those matchups where the group of panelists on TV behind the desk will all pick the Saints without any hesitation, won't offer much in the way of analysis because it isn't necessary, and quickly move onto the next game. And certainly, I'll be picking the Saints to win as well.

But are they so good that they should be double-digit favorites? I was curious how many games they've won by double-digit points this season, and as it turns out... seven. So alright, I won't be taking this playoff unworthy Bears team and the points.

Browns at Steelers (-6): The Browns made the playoffs for the first time since 2002, and they are facing "unprecedented challenges" as a result of a COVID outbreak that will force them to play without head coach Kevin Stefanski, among other significant issues, because of course they are.