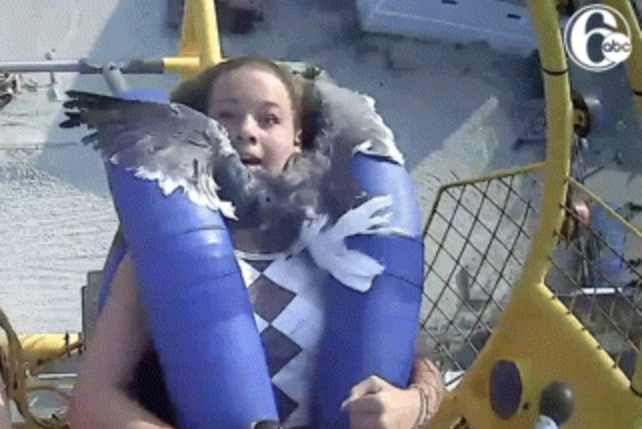 A seagull briefly flew into a teenager on a ride at Morey's Pier in Wildwood, N.J.

Seagulls have become increasingly aggressive at the Jersey Shore over the years, especially on boardwalks where the abundance of food turns the area into a feeding ground.

Ocean City got so fed up with its seagulls that it brought in falcons to scare them away during the summer.

But a teenager visiting Morey's Piers in Wildwood got a much more direct encounter with a seagull earlier this month while riding the amusement park's SpringShot ride. A video of the horrifying brush was shared by NJ.com.

The teenager, 13-year-old Kiley Holman, of Weatherly, Pa., told 6ABC about the experience she had on the ride. She was joined by her friend who was celebrating her 14th birthday.

"When I got shot up, then I saw it. It was going the opposite way and then it came back and hit me right in the face," Kiley said. "It felt really light and it only left like the tiniest scratch."

You have to admire the way Holman plucked the bird off of her face, discarded it and then immediately went back to being freaked out by the 75 mph ride as she processed the situation. That had to be some serious sensory overload.

The seagull may have gotten the worst of this disorienting collision. Its wings are splayed out with nowhere to really maneuver and a sudden shift in direction and momentum. It apparently was unharmed by the incident.

Lastly, let's take a moment to acknowledge how much the low-key dance track NJ.com added to this video improved the overall enjoyment of viewing it.