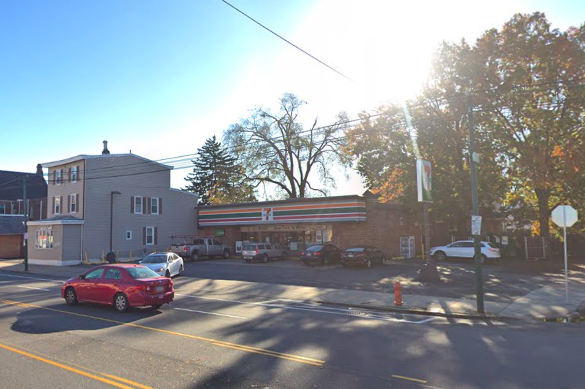 Philadelphia police said a 32-year-old woman armed with a bat and knife damaged a police vehicle outside this 7-Eleven in the Mayfair section of Northeast Philadelphia. The woman, who earlier smashed the windshield of a truck, was arrested nearby after leaving the scene on foot on June 17, 2019. Both incidents were caught on video.

A woman armed with a bat and large kitchen knife was arrested Monday afternoon in the Mayfair section of Northeast Philadelphia after smashing the windshield of a truck and confronting police officers, authorities said.

Two videos of the incident surfaced on social media, one posted to the Philly subreddit recorded by a man who said the suspect had targeted his vehicle while shouting obscenities and another on Facebook filmed as the woman was apprehended.

In the Reddit video the owner of the vehicle described the woman's erratic behavior as she damaged his truck. Police said the incident occurred in the rear driveway of a property in the 4200 block of Chippendale Street. (Note: Video contains NSFW language, but audio will only play if you follow link to Reddit.)

Crazy bitch smashing out windows and screaming about white devils. Mayfair. from r/philadelphia

Philadelphia police said they responded to the area after receiving a call from the truck owner. Police found the 32-year-old offender — who has not been identified — running along Frankford Avenue armed with a baseball bat and knife.

When officers attempted to stop her near Frankford Avenue and Decatur Street, she allegedly ran into a 7-Eleven parking lot and threw her bat at the police vehicle. She then began to yell obscenities at police as she retrieved the bat and allegedly threw it at the police car a second time, officers said.

Wielding the bat and knife again, the woman made her way to the vicinity of a daycare center on Frankford Avenue, where police confronted her on foot and stunned her with a Taser.

Police have not yet filed charges against the woman and an investigation remains ongoing.