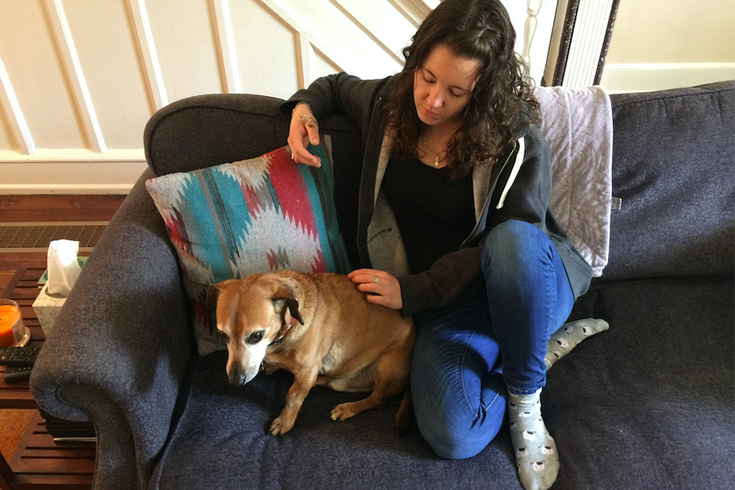 Jane Winters and her six-year-old dachshund 'Lil Bit' suffered injuries when attacked by a pit bull in Point Breeze on Tuesday, February 28, 2017. A friend's dog was also injured during the incident outside a hardware store on Point Breeze Avenue.

Less than a week after she and two dachshunds were attacked by a pit bull during a walk in Point Breeze, Jane Winters started her rabies treatments on Monday night.

It’s a pricey process brought on by her inability to get answers about the immunization records of the dog that attacked them. It's also one for which a friend started a GoFundMe campaign to help financially offset Winters’ lack of health insurance.

“I went to the hospital on Sunday and the doctor told me that rabies treatments are painful and expensive, that they’d hate to have me go through with it if I don’t have to,” she said.

That conversation didn't end with rabies shots, but a suggestion that Winters return to Point Breeze Avenue to get information about the dog which burst through the front door of a hardware store before last Tuesday's attack.

She’d already been there once, on Friday, when she said the pit bull owner tried to blame the incident on his pooch’s territoriality. Walking along the sidewalk outside the hardware store was perceived as “coming onto the property, so he was just protecting,” the owner told her, Winters said.

“I told him that I just need to know whether the dog has immunizations,” she said. “I got bit through the hand. My life could be at risk.”

Winters said he responded that the dog’s previous owner told him that it got immunizations as a puppy, but had no documents backing it up, she said.

On Monday morning, she returned to the hardware store with a checklist of signs provided by a doctor at Methodist Hospital that – short of documentation – could help determine whether the dog has rabies.

“I have no feeling in my thumb, and I’m trying to get back to work.” – Jane Winters

The man answering the door said that neither the man nor his dog was there, Winters said.

“He said he was in Maryland or something today and that he didn’t have a contact number for him,” she recalled. “I explained the situation and asked to have him call me right away because this is an urgent matter.”

Winters didn’t get a call back, so she returned to Methodist on Monday night, got four shots to start the treatment and scheduled three return trips over the next two weeks to complete it.

The dachshunds – Lil Bit and Beans – are also still recovering from injuries sustained in the attack, which left the sidewalk, and participants, bloodied.

She’ll take Lil Bit back to the vet on account of a “ball of fluid” that’s built up on his abdomen while Beans will have to get his stitches out soon as well.

All told, the three-fold medical fallout from the incident will cost thousands of dollars, a financial hit that inspired the “Jane and Pups Medical Bills” GoFundMe page.

“This page is to help her in a terrible accident that occurred completely out of her control,” it reads. “I let her know that I will be setting this up and she promptly said she would like any additional funds raised to go toward getting the dog who attacked them immunizations, and a muzzle and any other dogs in the neighborhood that need immunizations as well.”

As for the non-medical fallout, Winters said she’s still waiting to hear back from Philadelphia police (who said they’d reach out to her when contacted by PhillyVoice on Thursday) and the Animal Care & Control Team of Philadelphia, which said it’d be returning to the scene for further investigation.

Among those who have reached out to support her were City Councilman Kenyatta Johnson (whose legal counsel told Winters they’re looking into helping her), a few local attorneys and a witness who tracked her down via Facebook.

It doesn't seem as if a sense of normalcy will return to her life quite yet.

“I have no feeling in my thumb, and I’m trying to get back to work,” she said. “I’ve missed an entire week now, and since I’m a contract employee, I don’t make money if I don’t go.”