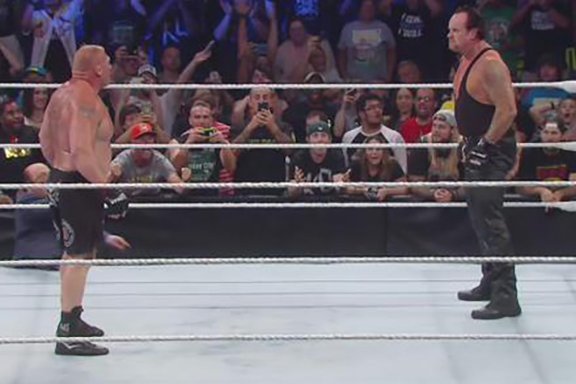 The Undertaker returned to WWE last night and took out Brock Lesnar.

The Scottrade Center in St. Louis was the setting for WWE’s Battleground event on Sunday night, and going into it I had a great feeling about the possible outcomes I was expecting. Of course, those outcomes didn’t happen and I was left, along with many of you, scratching my head as to why WWE went a certain way with a number of its wrestlers. We had a huge surprise return, but it left us with more questions than answers as Battleground went off the air.

But, we also had some great Divas action that wasn’t advertised, so that was a plus. We also had a fantastic United States Championship match – possibly a Match of the Year candidate. It’s funny how often we say that when John Cena and Kevin Owens step into a ring with each other now. But the ending pissed a lot of people off.

This match was billed as the “Battle for the Crown” match since R-Truth has been walking around with his own version of a King’s robe and scepter – a random cloth and a plunger. This match was what it was, nothing new that we haven’t seen between the two already. Barrett countered a Lie Dteector attempt by R-Truth and hit him with the Bull Hammer for the win.

Your winner and STILL King of the Ring: King Barrett

I understand the feud now between these two guys, and they both can work, so I expected a good match between the two despite me not really being invested in either guy too much.

I kept thinking the match would end in a countout because a lot of time was spent outside of the ring, especially with how loud the referee was counting. It almost made it seem like that was going to play a big part in the outcome of the match, but it didn’t.

Sheamus was able to lock in the cloverleaf submission hold on Orton, but The Viper made it to the ropes to break the hold, then wound up hitting the RKO out of nowhere [big surprise] to pin the Money in the Bank briefcase winner.

WWE has really done Sheamus no favors since he won the Money in the Bank briefcase last month. With losses piling up for the Celtic Warrior, it almost makes it seem like he is destined to become WWE World Heavyweight Champion very soon. Of course, WWE is no stranger to booking their wrestlers in that way.

That also makes two wins this year for Orton over the MITB briefcase holder, as he defeated Seth Rollins at WrestleMania, hours before Rollins would cash in the briefcase and win the WWE World Heavyweight Championship by pinning Roman Reigns.

The New Day vs. The Prime Time Players (c)

The New Day once again led off their segment with a promo on the St. Louis crowd, and it’s still as entertaining as ever. Just like we’ve seen in the past regarding these two teams, they sure as hell know how to work. They once again gave us a good match with a great hot tag sequence. Nothing too extraordinary, but the teams didn’t have to be over-the-top. Good matches that make sense and have good psychology behind them will always win out over spotfests. This was one of those matches.

After a quick tag from Darren Young, Titus O’Neil was able to hit the Clash of the Titus on Big E for the win.

Xavier Woods has become so much more entertaining on the outside of the ring than he has inside of it, so I hope this act continues with him, Kofi and Big E. They’re far too entertaining to switch it up at this point.

Despite some restholds that may have reminded you of an Orton match, this match was fantastic and the ending was superb. I didn’t think WWE would make Wyatt look as dominant as he did during the match, so that’s a huge credit to them and the producers of the match. It wasn’t anything special – just a really good match. Then, things got funky.

A man came in and attacked Reigns, allowing Wyatt to hit Sister Abigail and pin Reigns.

The man who attacked Reigns unmasked to reveal himself as Luke Harper, former and now once again Wyatt family member. Harper had been lost with Erick Rowan out with an injury right after the team reunited in the tag team division, so this move only helps Harper. It also helps Wyatt because it gives him more credibility since he’s done pretty much nothing of note since being on his own. This win against Reigns can only mean good things for Wyatt moving forward.

Earlier in the evening, Stephanie McMahon said that she ordered all of the Divas who took part in that classic segment last week on Raw to the Scottrade Center for Battleground. She then said each of the three Diva factions would pick one representative to wrestle in a Triple Threat Match, and that’s how we got a replacement for the Intercontinental Championship match that had to be canceled due to Ryback’s knee injury. More on that later.

They started off the match with two of the very best women’s wrestlers in NXT history and… Brie Bella. No offense to Brie – she’s improved dramatically along with her sister since they joined WWE. However, Charlotte and Sasha bring a whole different level to women’s wrestling today. They proved that in this match.

An entertaining match came to a close when Sasha had her finisher on and then Brie threw her out of the ring.

Charlotte locked on the Figure Four leglock on Brie and she tapped out.

With my girls! @BeckyLynchWWE @MsCharlotteWWE and a full fledged member the one and only @RicFlairNatrBoy #Wooo! pic.twitter.com/tO6IeKWld4

The ladies celebrated backstage with “The Nature Boy."

This was the match I was looking forward to the most on the card, and that’s saying something considering I’m a huge Brock Lesnar fan, especially since his WWE return in 2012.

There was no part of me that honestly didn’t believe Owens would leave Battleground with the United States title on his shoulder, but WWE once again swerved us.

This match, in particular, was perhaps the best of the three the two have had on pay-per-view, especially considering the absolute killing of finishing moves in this match. Nobody’s finisher worked. In fact, a lot of people online complained that the match [which I think was absolutely awesome] killed the importance of finishing moves because of how often each guy kicked out of them.

Near falls aplenty, an Attitude Adjustment off the top rope, and a pop-up powerbomb were not enough to finish neither Owens nor Cena until the champion was able to get the STF on a completely exhausted Owens. Owens tapped out and Cena retained his championship.

The finish was rather divisive online, but here’s why I think we should pump the brakes on “WWE burying Owens” already after two consecutive losses to Cena. I absolutely understand that’s how Rusev’s downfall began. I honestly didn’t think the company would have Rusev look like such a chump against Cena from WrestleMania onward, especially considering Rusev’s win against him at Fastlane in February. But now, we’re sitting in that same exact position we were back in April. Owens has lost to Cena twice in a row, and now the audience has no reason to believe Owens will capture the United States Championship any time soon.

I’m usually adamant about waiting until Raw and SmackDown to see what exactly is next, but this outcome makes it really hard for me to believe Owens will eventually get the upper hand on Cena again. This isn’t how to build new superstars that the WWE audience can get behind and believe in, but it’s still early. I’d like to think Summerslam is the night Owens gets his. Of course, the series is now 2-1 and there’s really no rubber match unless the two somehow face each other in September at Night of Champions. I’m cautiously optimistic now about Owens’ future on the main roster, but I honestly don’t think they would have had him drop the NXT Championship to Finn Balor unless they had bigger plans for him on the main roster. Here’s to waiting… just a little bit longer.

The Miz came out and cut a promo on the injured Intercontinental Champion, Ryback, and Big Show. Ryback has been dealing with a staph infection in his knee since Tuesday, and, as a result, was unable to compete at Battleground. At least WWE acknowledged it on-screen with a short segment that was fairly entertaining for what it was worth.

“Big Show’s been missing since the Attitude Era. And if he was smart, he’d do what the WWE Universe wants him to do, and that’s retire.” –Miz. Can’t argue with that. Show came out and knocked out Miz with a punch and then left. Easy goes it.

While Rollins wasn’t selling as much, Lesnar was still in control for much of the match before the gong hit. The gong.

What’s strange to me is that The Undertaker waited for this moment – OK, creative waited for this moment – to exact revenge on Lesnar for what happened a year and a half ago. Not to mention Lesnar has been a face since returning last month and the crowd was popping huge for The Undertaker – making Lesnar the de facto heel in the feud. I’m not sure that was a smart thing to do because Lesnar was the hottest act in WWE, next to Owens. He was getting huge cheers, and nobody is going to boo The Undertaker at this point. So will it be face vs. face? Who’s the heel in this, if there is one? There are too many moving parts that don’t make sense and it hurts my brain to try to make sense of it, so I’m just going to move onto the next section.

This event saw both Lesnar and Owens castrated a bit, something nobody really expected going in. As I said on The Straight Shooters podcast a few weeks ago [and more information coming on that show later], predictability is good in a lot of cases in pro wrestling. And this event was unpredictable to a fault, especially considering it was billed as one of the biggest WWE events in July in recent memory.

So, we have one of the big main events of Summerslam pretty much set up – The Undertaker vs. Lesnar. Rollins escaped and who knows where he is at this point for next month? I’m hoping we see one more match between Cena and Owens on Raw [one that Owens wins in the main event segment] and then the real rubber match between the two at Summerslam.

I thought this event had the potential to be one of the best of the year, but I’m left with an extremely bad taste in my mouth. Both matches this event was sold on severely disappointed me, simply because I don’t think they did enough to make this worthy of anyone going out of their way to see. Sure, Owens and Cena wrestled in a classic – probably their best match of their current feud – but the wrong outcome really left a lot to be desired.

We’ll have more tomorrow morning when I review tonight’s Monday Night Raw right here at The Philly Voice. Here’s hoping tonight’s show leaves us with a hint of mint in our mouth… or something.