WWE Fastlane: Who’s the No. 1 contender for Triple H at WrestleMania? 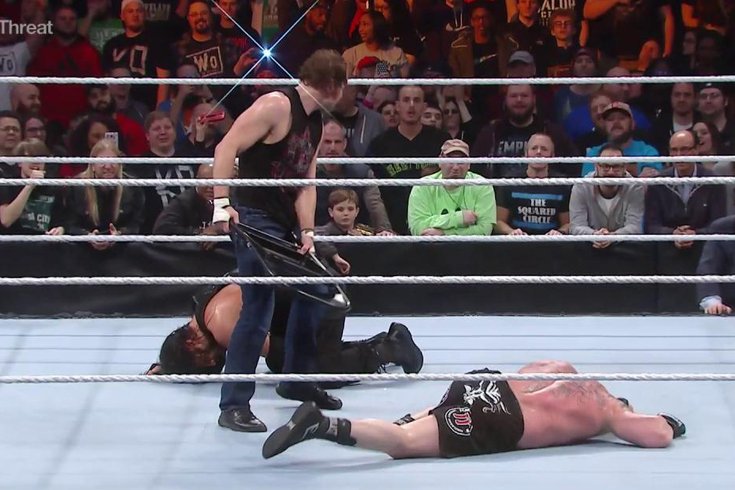 Dean Ambrose wielded a steel chair with force in Sunday night’s main event, but was it enough to take a spot in the main event at WrestleMania?

Cleveland’s Quicken Loans Arena was the site for the last pay-per-view before WrestleMania 32, and we got answers to a lot of questions on Sunday night. We know who the No. 1 contender is for Triple H’s WWE World Heavyweight Championship. Three title matches and the rubber match between Styles and Jericho also highlighted Fastlane.

Here’s a look at what went down on Sunday night:

2 out of 3 Falls Match for the United States Championship

I was looking forward to this match even after it was put on the kickoff preshow because I thought WWE would give it plenty of time. They kind of, sort of did. The psychology behind this match was that Del Rio wanted to make sure Kalisto and the world knew that his wins against him were nothing more than a fluke.

And I guess this was him trying to help his cause early on in the bout on the outside of the ring, as he got a steel chair and realigned Kalisto’s spine with it, losing the first fall in the process.

Winner of the first fall: Kalisto

Not soon after, Del Rio hit the Double stomp on Kalisto, evening the match.

Del Rio nailed another Double Stomp on the outside of the ring, and it all but looked over. Kalisto was able to get back into the ring before the ten count as the commentators teased that a countout win in the third fall for Del Rio could give him the United States Championship. Del Rio went for another Double Stomp and missed, and Kalisto rolled him up for the victory.

Your winner of the third fall and STILL WWE United States Champion: Kalisto

Sasha Banks and Becky Lynch vs. Naomi and Tamina

Here’s an interesting way to start the regular card, having a tag team divas match highlighting Sasha and Becky. I have to say, Sasha’s theme music is on point and I don’t think there’s anyone’s in WWE that tops hers.

Banks was able to lock the Bank Statement on Tamina and Naomi tried interceding, but Becky was able to grab her and put her in the Disarmer. Both Naomi and Tamina, the legal one, tapped out and gave the victory to Sasha and Becky.

Owens made his way out to the ring first, which is still weird in 2016 for a champion to be introduced first. Ziggler, who’s originally from Cleveland, had some cool tights he was rocking out for the match.

This was a pretty grueling match and went on a bit longer than I had originally expected.

Ziggler went for a superkick but Owens pulled the ref in the way, causing Ziggler to hold up, and that’s just the amount of time Owens needed. He hit Ziggler with the Pop-Up Powerbomb to retain his Intercontinental title.

The Wyatt Family vs. Big Show/Kane/Ryback

This should have been an enhancement match for the Wyatts to build them to WrestleMania for whatever they would be doing. Instead, the WWE Titans got the win and Luke Harper might be seriously hurt. I have no other words for this. It was a complete sham.

Charlotte, however, being the Flair that she is is just too good. She reversed a half crab after Brie’s leg was “supposed to give out” and she locked on the Figure Eight for the submission victory.

Fantastic match. Probably the best of the night. Styles needed to win here and he did in submission fashion, and it looked like it crushed Jericho to have to give up to the Calf Crusher.

I guess hitting the Styles Clash wasn’t enough to beat him, but Styles looked rather strong in this match, so maybe starting Monday night we’ll see what his WrestleMania program looks like. I just hope it’s not Jericho, and it doesn’t seem like it’ll be – the two shook hands after the match.

What’s this!? Bonus match!? Wooohooo! The Social Outcasts got a pay-per-view appearance and so did Goldust, and I thought this might be the birth of the Golden Truth tag team… finally. But, that was not to be, as Axel got a rollup win against R-Truth. Goldust tried apologizing after the match, but R-Truth wasn’t hearing any of it.

There were some cool moments in this match, especially when Reigns and Ambrose put Lesnar through the announce table, ala The Shield. Twice. Lesnar’s Kimura Lock also made an appearance again, but it wouldn’t be a submission maneuver that ends this one.

After Ambrose introduced a chair to both Reigns’ and Lesnar’s spines, Reigns hit Ambrose with the spear and got the victory.

Your winner and No. 1 contender to the WWE World Heavyweight Championship: Roman Reigns

Predictable. But good. That’s pretty much what WWE is nowadays. This is how WWE has to build Reigns to finally cement him as the next top dog in the company, so that’s what they’re gonna do. The champion came out and stared down Reigns in the ring with the WrestleMania logo in the background, just in case we all weren’t aware that would be the main event on April 3rd.

I enjoyed the event. I’ve said it before and I’ll say it again – predictability is good in pro wrestling. This was the good kind of predictable. Had WWE chosen Lesnar or Ambrose to come out on top in the main event, that’d be unpredictable just for the sake of being unpredictable. Reigns/Triple H makes the most sense, and I’m looking forward to how they’ll be building this match in the next month plus.