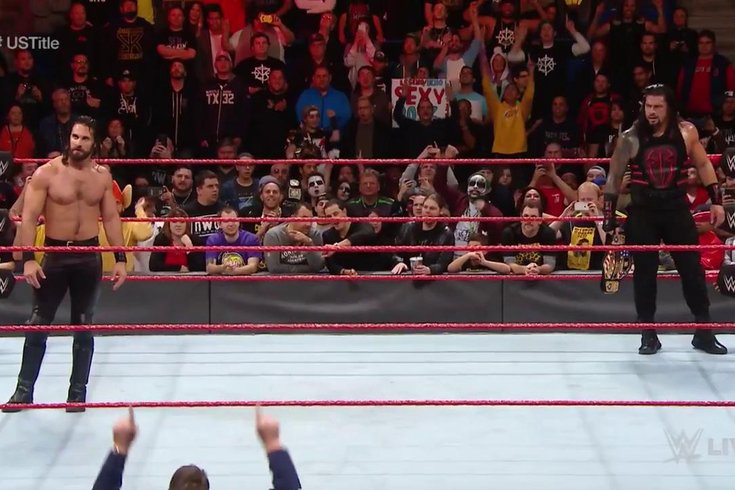 Seth Rollins saved Roman Reigns on Monday night. Could we see the return of one of the most powerful groups of all-time?

The fallout from Hell in a Cell would take place from the XL Center in Hartford, Conn., Monday night during a special Halloween edition of Monday Night Raw. The build to the Survivor Series also began with Team Raw gaining a representative, and we also saw an appearance by Goldberg.

Goldberg delivers a spear and a Jackhammer

Goldberg began the Halloween edition of Raw heading to the ring for a promo. Before he could get much out, Paul Heyman interrupted him and ran him down. He said Brock Lesnar is an impatient man and then introduced him, much to the excitement of the live audience … and even Goldberg himself, who looked like he sure wanted to get physical with somebody.

Alas, Lesnar didn’t come out and Heyman laughed, saying he duped everyone into thinking Lesnar would be there. Rusev then came out and confronted the former WCW Champion and received a Jackhammer for his troubles. Then, out of nowhere, Goldberg delivered a spear to Heyman. Shots fired, indeed.

Heyman was transported by ambulance to a hospital.

Both Goldberg and Lesnar will appear on Raw on November 14 from Buffalo, N.Y. on the go-home show to Survivor Series. As for Rusev’s appearance? I wouldn’t be surprised if, down the line, Goldberg and Rusev go one-on-one. I know right now, Goldberg’s match against Lesnar is a one-off. But never say never.

Roman Reigns defended his United States Championship in the main event against Chris Jericho on Monday night after a heated promo between the two during Mick Foley’s Survivor Series address earlier in the evening.

After Owens and Jericho hit a combination Pop-Up Powerbomb into the Codebreaker, Seth Rollins’ music hit and he came out to level the playing field. He and Reigns exchanged a look, as if to tease a Shield reunion. I don’t think they’ll team up to reform The Shield, especially with Dean Ambrose still on SmackDown, but there sure will be a lot of teases to it now. I’d imagine that Rollins will join Reigns, Owens, Jericho and Braun Strowman [Yes! Stay tuned.] to round out Team Raw for Survivor Series.

One night after claiming the Raw Women’s Championship for the third time in just over a year, Charlotte was already looking forward to Survivor Series as she captains Team Raw against Nikki Bella’s Team SmackDown. While thinking about possible weak links for her team, the champion called out Bayley and ran her down, calling her a glorified fan wearing a costume. Charlotte can make matches, I guess, and put her Survivor Series teammate, Nia Jax, one-on-one with her nemesis.

The New Day is ready to lead

Speaking of Survivor Series, The New Day are looking to lead their team of ten [five tag teams] into battle against the best of SmackDown’s tag teams. In the above promo, they channel the WWE Hall of Famer, Charles Wright.

There’s no doubt Brian Kendrick is a great worker. His heel work to this point has been great – albeit somewhat unbelievable at times, but that’s neither here nor there – and he’s now the WWE Cruiserweight Champion. I still don’t know why WWE elected to put the title on a 37-year-old veteran, but seeing what they’ve done with the division and how Triple H must feel after the fantastic tournament this past summer that was the Cruiserweight Classic, I’m not sure they care. The division has been a monumental failure to this point – almost two months in – and now it’s more about WWE storylines and ridiculous angles than the wrestling that made the CWC so great.

And in Monday night’s title rematch from Hell in a Cell, TJ Perkins was made to look dumb in comparison to Kendrick yet again. He looked pretty dumb showing compassion for Kendrick during their match at Hell in a Cell Sunday night, but

Braun Strowman won a battle royal to determine who would qualify for Team Raw for the five-on-five elimination match against Team SmackDown at Survivor Series. Sami Zayn teased eliminating Strowman, but the big man eliminated Zayn. I could see Zayn qualifying for the team somehow and the two having a pay-per-view match down the line. They’ve teased a Strowman-Zayn match for a while, so I would have to assume there will be some payoff in the end.

Unless there’s not. Because WWE likes to change its mind a lot.

During the battle royal, Cesaro eliminated his tag team partner, Sheamus, which was a pretty funny moment.

I love themed episodes of wrestling, if only because I’ve learned over the years not to take them too seriously. Some people do, and that’s their prerogative. Me? I just enjoy random entertainment, good or bad, especially on a three-hour pro wrestling show. It doesn’t mean Enzo Amore’s street fight against Luke Gallows was good. In fact, the ending was pretty lame. But, hey, any excuse for DDT’ing someone with a pumpkin on their head.

• Trick or Street Fight: Enzo Amore d. Luke Gallows by pinfall with a flying DDT off the top rope.

• Nia Jax d. Bayley by pinfall via a Samoan Drop.

• Cesaro/Sheamus d. Shining Stars by submission when Sheamus locked the Cloverleaf on Epico.