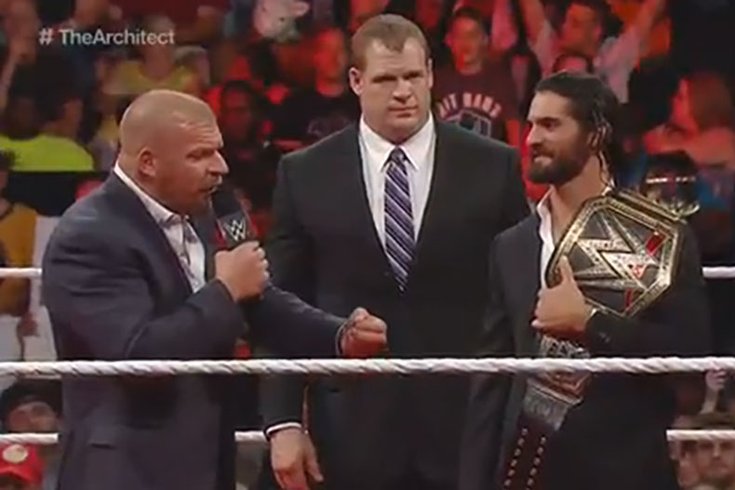 "The Architect of a Dream” was honored by The Authority on Monday night before Dean Ambrose crashed the party.

Monday’s episode of Raw from the Richmond Coliseum in Richmond, Va., was very well-booked and told a tremendous amount of stories to the point in which character development was the name of the game for this episode’s main objective, or so it seemed.

With character plots such as Rusev and Lana’s partnership demise, Kevin Owens confronting John Cena, and the ongoing feud between Kane and Seth Rollins which took a fairly interesting turn Monday night, Raw was pretty entertaining from a product standpoint.

Not to mention we’re getting one hell of a card in two weeks at Elimination Chamber. That’s always best for business.

“Architect of a Dream” was the theme for Monday night, as The Authority decided now would be a good time to stroke the ego of their WWE World Heavyweight Champion,Seth Rollins. Complete with red carpet and all, this was The Authority’s chance to further build up Rollins verbally while getting him more over as a heel. Even Joey Mercury got a little choked up during the ceremony.

Dean Ambrose had heard enough of the verbal sucking up to Rollins and decided to interrupt the festivities. Fortunately for us, Ambrose is a notorious line jumper and demanded a WWE World Heavyweight Championship match. After Rollins along with J & J Security unsuccessfully tried attacking Ambrose, we saw the return of the cinder blocks as Ambrose threatened to hit Rollins with a steel chair in the head on the pile of blocks before Stephanie granted his championship match against Rollins, set for Elimination Chamber.

Kane then got involved and this allowed Rollins to hit Ambrose with perhaps his new finisher, the pedigree. Rollins stood tall to end the program, and it looks like we’re in for another classic match between he and Ambrose for the WWE World Heavyweight Championship. When did we get so lucky?

Seeing a showcase with a velvet bag in the shape of a belt excited me in the beginning of Raw because I thought we were getting a new WWE title belt. I’ve gotten accustomed to the new WWE World Heavyweight Championship belt, but I’ll always have a soft spot for the winged eagle belts of old, and I thought that maybe there was a chance we would see The Authority open Raw by giving Seth Rollins his new championship belt.

Alas, that was not to be. The podium showcased the WWE Intercontinental Championship that Daniel Bryan had vacated last Monday night on Raw. And that’s what Raw opened with Monday night – building to the Elimination Chamber match for the vacated Intercontinental Championship on May 31st. We also got to see our first two participants in the match since Sheamus and Ryback both decided to interrupt Triple H and Stephanie McMahon in the ring. I’m guessing they must have been in a good mood because they let Sheamus and Ryback have a nice back and forth promo before H booked them in the first match of the night. King Barrett, R-Truth, Rusev and Dolph Ziggler would later round out the six individuals to compete for the title in the Chamber. I would have expected Neville to be in the mix, but R-Truth likely took his place due to what looks like a legitimate knee injury.

Rusev addressed his loss from Payback on Sunday night by telling us he never quit. He also said there would be no Lana, in which the crowd reacted with loud boos upon hearing the news. However, Lana made an appearance, against Rusev’s word, and told him that she was trying to protect him because she cares for him. Not one to get sentimental, Rusev responded by calling Lana pathetic and disgusting. No wonder I can see why Lana cares about him. Rusev ranted and raved and said he stands alone and sent Lana packing.

Later in the show, Lana came to the ring during a Dolph Ziggler promo after his match and laid a big, wet one on him. This brought out Rusev who attacked Ziggler before being slapped in the face by Lana. Rusev, looking like he was about to have smoke coming out of his ears, then fell victim to ZIggler’s Zig Zag. Lana left with Ziggler, and I’d imagine we’re seeing Rusev’s next feud. Judging from the past, if Ziggler pins Rusev even one time, then we’ll know for sure Rusev’s just another ordinary superstar mulling around WWE. It’s amazing how WWE’s character development of Rusev happened so quickly before truly giving him a chance to become a top superstar. Now he’s just simply there.

At least Ziggler gets the girl… again. Right? Not sure how much this’ll matter in terms of Ziggler’s push, but I doubt it means much.

John Cena didn’t defend his United States Championship in an open challenge, and that’s due to NXT Champion, Kevin Owens. Owens confronted Cena and the two had a great back-and-forth promo, which built perfectly to this Wednesday’s NXT Takeover special on the WWE Network called Unstoppable. Owens will defend his NXT Championship against the man who pushed Cena to the limit a few short weeks ago, Sami Zayn. Owens said one day that he and Cena would fight, but that it would be on his terms. He then cheap shotted Cena and hit him with his patented pop-up powerbomb, stomped on the United States Championship, and left Cena laying in the ring to make a huge impact in his Raw debut.

Later in the program, we found out in a backstage segment that Owens would challenge Cena at the next WWE pay-per-view, Elimination Chamber.

We have our six teams for the WWE Tag Team Championship Elimination Chamber match on May 31st. Despite having a Tag Team Championship match end in a disqualification Monday night, all six teams that will compete in the Chamber match made waves by getting involved after the match. Those six teams will include: The New Day (c), Cesaro and Tyson Kidd, the Lucha Dragons, Los Matadores, The Ascension and the Prime Time Players.

She's BACK ... and @RealPaigeWWE says it's HER HOUSE!! #RAW pic.twitter.com/WPnEjHURzB

Paige is back! How we’ve missed her in the Divas division. After a post-match beatdown on Divas Champion, Nikki Bella, by Naomi and Tamina, Paige returned and held both Naomi and Tamina at bay before hitting Nikki with the Ram-Paige and holding what she believes to be her Divas Championship high in the air. Hopefully now that Paige is back, the Divas division will be heading in the right direction.

Bo Dallas is also back, and he confronted Neville on Monday night. And it was great stuff.

• Sheamus d. Ryback by pinfall after a Brogue Kick.

• WWE Tag Team Championship (Xavier Woods is banned from the ring): Cesaro and Tyson Kidd d. The New Day by disqualification after Big E and Kofi wouldn’t stop double-teaming Kidd in the corner. Xavier Woods came in to attack Cesaro and Kidd before each of the six tag teams involved in the Elimination Chamber Tag Title match hit the ring, sequentially.

• Dolph Ziggler d. Stardust by pinfall via the Zig Zag.

• Luke Harper and Erick Rowan d. Fandango and Zack Ryder by pinfall after Harper and Rowan hit Ryder with a double-team maneuver of a superkick into a full nelson slam.

• Divas Championship: Nikki Bella (c) d. Naomi by disqualification after Tamina ran into the ring and superkicked Nikki. During the match, Nikki surprisingly hit a nice suicide dive to the outside.