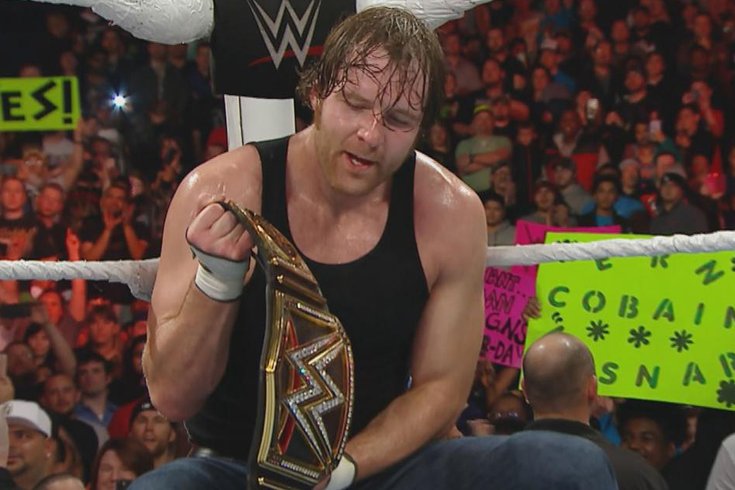 Dean Ambrose hit Triple H with Dirty Deeds on Monday night and then held the title high in what could perhaps be a prelude to Saturday night after the two square off in Toronto.

Raw invaded the Allstate Arena in Chicago just five days before WWE Roadblock. While Triple H prepares to defend his WWE World Heavyweight Championship against Dean Ambrose in what’s basically a glorified warm-up match for him before WrestleMania, more big matches were made official for the WWE Network special on Monday night.

We’re also only two weeks away from Raw heading to Philly and the Wells Fargo Center, just two weeks before WrestleMania. Yours truly will be in attendance and looking forward to the build to WrestleMania finally making a stop in Philly after three years.

Before Raw took the air, CBS Sports announced the latest inductee into the WWE Hall of Fame Class of 2016, and it was the cop from Cobb County, Ga. – the Big Boss Man. Real name Ray Traylor, the law and order of WWE will be inducted into the Hall of Fame posthumously as he passed away in 2004 from a heart attack.

Dean Ambrose wanted to confront Triple H after the WWE World Heavyweight Champion left him decimated on the announce table a week prior, much like he did to Ambrose’s brother, Roman Reigns, two weeks ago.

Triple H came out, but didn’t get in the ring with the Lunatic Fringe, and instead addressed him from the top of the ramp near the entrance. Ambrose challenged him to come to the ring, but the champion said he fights on his own time. He made the main event of the night, pitting Ambrose against his former rival, Bray Wyatt.

The main event would end in a disqualification after the Wyatt Family attacked Ambrose, but the challenger to Triple H’s championship on Saturday would face an even tougher task when the champion made his way down the ring looking to provide an encore performance of last Monday night. However, Ambrose was up to the task as Triple H went out to the announce table to prep it to put Ambrose through it and walked right back into a Dirty Deeds in the middle of the ring.

Ambrose held the championship high above his head, and now we’re left wondering if WWE would really be willing to pull the trigger on making their most popular star at the moment the champion before WrestleMania.

It’s not going to happen. But it’s fun to think about, if not simply because it’s different and they’re not forcing Ambrose down the fans’ throats.

There would be no Reigns on Monday night as he’s been selling his injuries due to the hands of Triple H two weeks ago. Look for him to make an appearance either at Roadblock this Saturday in Toronto or next Monday night in Pittsburgh.

The father and son rivalry gets even more personal

GONG!! The #Undertaker's bell tolls ... but it's The Chairman @VinceMcMahon! #RAW pic.twitter.com/uE4ZXfiMeh

In a moment of pure awesomeness, The Undertaker’s gong hit and the lights went out and the crowd erupted – except The Undertaker wasn’t in the building. Instead, Vince’s all too familiar tune of “No Chance in Hell” blared through the arena’s speakers as the owner of WWE made his way out to the ramp. He brought an old picture of himself and his son that was taken before Shane’s first wrestling match as a fan, and promptly threw the picture frame to the steel and cracked it to pieces.

You know, I could’ve used that picture frame, Vince. There’s really no need to waste perfectly good $2.99 frames like that. But I digress.

Vince brought out security to take Shane out of the building, but ol’ money fists wasn’t having it. When security hopped into the ring, Shane O’Mac took matters into his own hands with his fists of fury and took out security before leaving.

This was a very good and very intense segment. Vince played his role perfectly and Shane showed great emotion and fire that we often don’t see in today’s performers.

Speaking of Shane, WWE produced this video package of his greatest accomplishments in WWE, and man did it turn out to be fantastic. For as many criticisms we all can throw WWE’s way, video packages are not one of them.

Kevin Owens didn’t put his Intercontinental Championship on the line against Neville, but it turned out to be a fantastic non-title bout nonetheless. These two have great chemistry and it showed in one of the best Raw matches we’ve seen so far this calendar year. If you didn’t catch it, YouTube highlights certainly won’t do the match any justice, so I highly recommend seeking the entire match out either on the internet or, if you’re a Comcast subscriber, DVR the replay of Monday Night Raw on Universal HD on Saturday night. You won’t be disappointed.

Owens would get the win after rolling up Neville and holding his tights as he was trying to go to the top rope for the Red Arrow. Owens attacked Neville from behind after the match, but someone was in the building that was looking to make Owens pay for his current and prior transgressions.

Sami Zayn’s music hit and Owens’ rival from NXT ran down to the ring and took out the champion.

It sounds like Zayn is on the main roster to stay.

Chris Jericho sends a message to the fans and AJ Styles

AJ Styles and Chris Jericho teamed up once again – this time under the tag team name of Y2AJ, complete with T-shirts and all – and had a chance to wrestle the WWE World Tag Team Championships away from The New Day. And they came close.

Styles and Jericho looked like a well-oiled machine, which made the obvious even better. The New Day was able to retain the titles when Big E was tagged in and hit Jericho with the Big Ending, and when Styles went to help his partner after the match, he ate Jericho’s Codebreaker. Three times, actually.

Leave it to WWE’s Twitter to over exaggerate what their fans are thinking.

Jericho’s turn wasn’t all that surprising. Many thought it would happen, especially considering the two began teaming after three matches against each other. Now it looks like the two former partners will be on a collision course at WrestleMania, giving Styles his first Mania match that means something.

"All they are chanting is A-J-STY-LES! ... They won't be chanting that anymore!" - @IAmJericho #RAW pic.twitter.com/9hCHRQNC1U

Backstage after the match, Jericho said he was tired of the fans chanting, “AJ Styles!” and said he hopes the crowd enjoyed it because they won’t be chanting Styles’ name anymore.

Ryback approached United States Champion, Kalisto, backstage after his match with Tyler Breeze and, if I didn’t know any better, basically challenged him to a title match at some point. Will that be at WrestleMania? Maybe Roadblock? Maybe Raw next week? Who knows? All I know is that it looks like this new attitude Ryback might be wearing some gold around his waist pretty soon.

Charlotte continued to make her presence felt during a tag team divas match on Monday night. With Sasha Banks and Becky Lynch still teaming up despite being opponents come April 3rd in a Triple Threat Match for the Divas Championship, the duo was able to come away with a victory after Sasha made Naomi tap out to the Bank Statement.

So… is Lana ever going to wrestle?

Speaking of the Divas division, it looks like Lana will be getting in the ring with Brie Bella eventually. She made an appearance on Monday night and slammed Brie’s face right into the mat. One would imagine we’ll see this match leading up to WrestleMania, and not on the actual card.

R-Truth gets Goldust some deep dish pizza, but…

Not a smart move by R-Truth, who didn’t know the guy he wants as his tag team partner is lactose intolerant. I live for these segments each week.

• Non-Title:• Non-Title: Kevin Owens (c-IC) Neville by pinfall via rollup. Sami Zayn came out to save Neville after Owens attacked him after the match.

• Summer Rae d. Brie Bella by pinfall via a rollup after Lana came out and distracted Brie. Lana attacked Brie in the ring after the match.

– Ziggler eliminated Barrett by pinfall via a superkick.

– Sheamus eliminated Ziggler by pinfall via a Brogue Kick after Rusev hit Ziggler with a kick to the head from the outside of the ring.

• Sasha Banks and Becky Lynch d. Naomi and Tamina by submission when Sasha made Naomi tap out to the Bank Statement. Charlotte attacked Sasha after the match.

• Dean Ambrose d. Bray Wyatt by disqualification after the Wyatt Family interfered. Triple H came out but Ambrose hit him with Dirty Deeds.