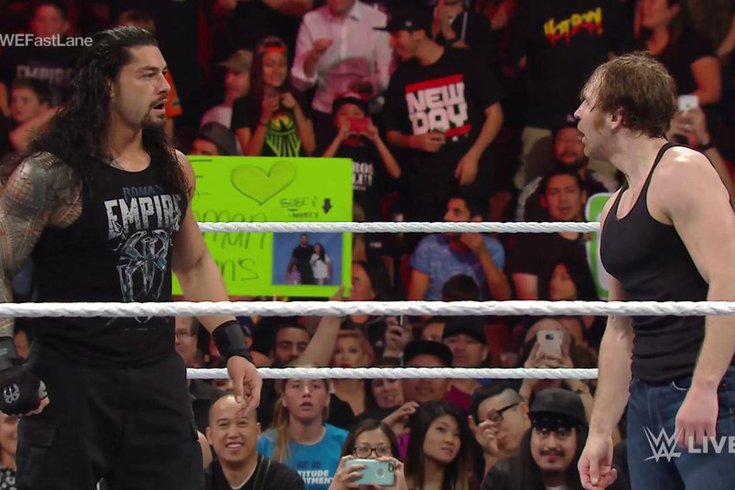 Dean Ambrose sent a message to Roman Reigns on Monday night, but it didn’t seem like Reigns was too worried about it.

The Honda Center in Anaheim, Calif. hosted the go-home episode of Raw to Fastlane on Monday night. It was a pretty good episode of Raw, but I would have rather the program ended differently than it did. I understand Big Show was in the main event to hype his appearance on the Stone Cold Podcast live after Raw went off the air, but it just messed up the whole flow of how the flagship program should’ve ended heading into Fastlane.

As we’ve seen over the last few years, the SmackDown episode before a pay-per-view really didn’t mean much, but WWE left something for us to look forward to on Thursday night for the final go-home show overall before Fastlane. We’ll have at least two big angles to look forward to, as you’ll see later on.

Brock Lesnar will also be on ESPNews’ SportsCenter Tuesday night at 9 p.m. with Jonathan Coachman. The last time Lesnar was on ESPN, he had just signed a brand new contract with the company.

Stephanie McMahon came out and said even though Lesnar wasn’t there, Ambrose was gonna get some action anyway in the form of a Fatal 5 Way match in which he defends his Intercontinental Championship. Kevin Owens, Stardust, Tyler Breeze and Dolph Ziggler all made their way down the aisle and the first match of the night was on.

It was a fantastic match, but I could’ve done with the missile dropkick spot we’ve come to see every single week on television now. A move like that should be something special that we rarely see, but seeing it every week, it’s lost its luster. That’s happened with plenty of moves, as well. The ending sequence of that match was great and had a few false finishes before Owens hit Breeze with the Pop-Up Powerbomb to regain the championship.

Big Show and BraunStrowman main evented the program, but it was pretty obvious it was to hype Big Show’s appearance on the Stone Cold Podcast on the WWE Network immediately after Raw went off the air.

Erick Rowan interfered and caused the disqualification, and Ryback tried coming in for the save to no avail. Once it looked like the Wyatts would end Raw standing tall once again, Kane came through the ring and Ryback and Big Show fought off the Wyatts.

AJ Styles and The Miz had a pretty good match, and this probably made Miz look a lot better than Styles. There were a few near falls before Styles got Miz to tap out to the Calf Crusher. After the match, Styles challenged Jericho to a third match in their series, but Jericho said he would wait until Thursday and give him an answer on SmackDown.

Despite Lesnar not being at the Honda Center for Raw, his advocate, Paul Heyman, was in the house. He called out Reigns and spoke to him about the difference between his daughter and his friendship with Ambrose. Reigns can’t have both of them, and at Fastlane, he’s gonna have to choose one of them. Heyman was alluding to providing a fulfilling life for Reigns’ daughter as comes with the territory of being champion, or keeping his bond with Ambrose.

It was a good promo by Heyman, but Reigns seemed like he already had a decision made and shook Heyman’s hand before the Dudley Boyz attacked him from behind. Ambrose eventually made the save, which set the stage for a tag team match between the two sides on Thursday’s SmackDown.

Ambrose then teased hitting Dirty Deeds on Reigns, who eventually powered out of it. The two stared each other down for a few seconds before Reigns laughed it off and pounded fists with his “brother.”

And I hated this.

This was a great opportunity for Reigns to show he’s not just taking this match on Sunday as “just another” one. Reigns should show more fire and determination in getting into the main event at WrestleMania, and he didn’t do himself any favors here. With Ambrose’s back turned, Reigns could’ve hit him with a spear or Superman punch to send a little message the way Ambrose sent him one.

But, nope. We had Reigns laughing it off. That’s the problem with his character. In December, he showed some fire and passion. Now, he’s laughing at his friend who almost planted him with his finisher because they’re “bros.” It’s stupid.

Brie Bella was set for an exclusive interview in the ring before Charlotte and Ric interrupted. The WWE Divas Champion said Brie should be at home tending to her retired husband and sister who’s on the shelf due to neck surgery, but realized she’s here because she’s the breadwinner now.

Brie let Charlotte continue until she finally couldn’t take it anymore, and she attacked her and gave her some Daniel Bryan kicks for good measure as the crowd chanted, “Yes! Yes! Yes!” It was a pretty cool moment. I wouldn’t hate Brie winning on Sunday to give her the title for a short run before she steps away from the industry for good, as reports are running rampant that she’ll be the next to retire to start a family with her husband.

The New Day is set to be guests on The Cutting Edge Peep Show with Edge and Christian this Sunday at Fastlane. That should be a good segment, but I would imagine we will see some new challenger for their WWE World Tag Team Titles either Sunday or next Monday night. Maybe a certain team from NXT? Maybe Enzo and Cass? I’m not the only one that wants to see them make their debut – almost everyone on social media has the same desire.

We need an R-Truth-Goldust tag team asap. And another angle…

Kalisto defending the United States Championship against Alberto Del Rio has been moved to the kickoff preshow and will be a two out of three falls match.

Check back later this week for my Fastlane preview.

• AJ Styles d. The Miz by submission via the Calf Crusher. Chris Jericho was on commentary during the match.

• Summer Rae d. Paige by pinfall via a rollup while putting her knees on Paige’s shoulders.

• Heath Slater d. Zack Ryder by pinfall via a implanted DDT after Ryder was distracted at ringside by the Social Outcasts.

• Sheamus, Rusev and Alberto Del Rio d. Neville and the Lucha Dragons by pinfall after Del Rio hit Sin Cara with the Double Stomp halfway across the ring.

• Becky Lynch d. Naomi by submission via the Disarmer. Tamina and Naomi attacked Lynch after the match before Sasha Banks came down for the save.