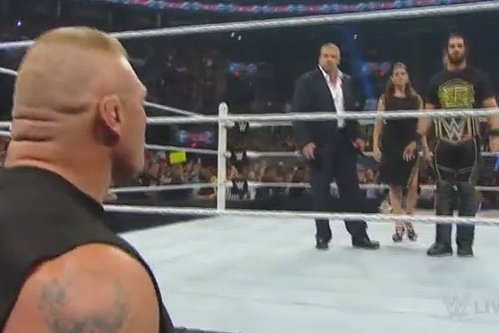 Dean Ambrose reacts perfectly after finding out he can join the Payback main event with a win over Seth Rollins on Raw..

Payback is fast approaching as the May pay-per-view is only two weeks away, and WWE’s Monday Night Raw this week really brought the goods and became one of the best episodes of Raw in the last few years that I could remember.

If it seems like WWE just had a pay-per-view, it’s because it did – Extreme Rules was just over one week ago. It looks like the build to the Money in the Bank pay-per-view in June will have a lot of time to develop after Payback. But WWE made sure to load up its Montreal show Monday night and we had a few surprises and a great episode of Raw to take in from the Bell Centre.

Since Montreal is a great host to pretty much everything, the crowd delivered with enthusiasm and chants all night long. Some chants were ill-timed, but they really made this show feel like it was special, especially during the first few matches of the night. Not to mention a special debut later in the show, but I’ll tell you about that a little later.

The show opened with Randy Orton and Roman Reigns both jarring back and forth as to how both of them would walk out of Payback as the WWE World Heavyweight Champion. It wasn’t until most of us were already bored with the back-and-forth between Orton and Rollins that the WWE Tag Team Champions showed up, as The New Day advised both superstars in the ring to not let it bother them that Reigns can’t win the big one and that Rollins has Orton’s number … on speed dial. BOOYAH! This led to a handicap match to kick off the wrestling portion of the show, and The New Day left the Bell Centre with a huge victory after defeating the two No. 1 contenders for the WWE World Heavyweight Championship.

Director of Operations, Kane, came out after the match and made the main event of Reigns vs. Orton. I’m surprised they didn’t save that one for next Monday night’s main event.

Kane wasn’t done yet, as he ran into the WWE World Heavyweight Champion, Seth Rollins, in a backstage segment and made a rematch of last week’s SmackDown main event with Rollins taking on his former Shield partner, Dean Ambrose with J & J Security being banned from ringside. Before that match began just after the 9 p.m. hour, Kane added another stipulation that if Ambrose won the match, he would be added to the Triple Threat WWE World Heavyweight Championship match at Payback to make it a Fatal Four Way Match.

And that’s exactly what happened. With J & J Security running in anyway, despite being banned from ringside, it didn’t help Rollins much as Ambrose countered a rollup attempt to roll Rollins up himself for the pin.

Your Payback main event now consists of Rollins vs. Orton vs. Reigns vs. Ambrose. That’s some star power. And that also gives away the ending because there’s no chance Rollins doesn’t pin Ambrose to retain his title, which in turn keeps Orton and Reigns strong. Rollins isn’t losing the championship anytime soon, folks.

Back to the Tag Team Champions, I’d really like to know if The New Day is going by the “Freebird Rule” when defending the Tag Team Championships. Xavier Woods wears one of the belts around his waist despite Kofi and Big E winning the titles. The “Freebird Rule” allows any two of the three members of the group to defend the titles in a match, and we haven’t seen that in a long time. I’d like to see that “rule” invoked for this group as their heat gets better and better each week. And the group celebrating the entire night in backstage segments made the program even better. High praise for The New Day, just a month after I thought they would crash and burn.

I don’t like the fact that Rusev and Lana are hinting towards splitting already, especially since Lana seems to have changed her on-screen character without much explanation. She used to hate everything about America, and now she’s basking in the glory of the chants from the crowd? She even started Fandango-ing at ringside Monday night during Rusev’s match with Fandango. This is a retro PG-rated Marc Mero/Sable storyline where Mero kept sending Sable backstage during his matches since the crowd was so much more into her than him. Rusev did the same to Lana on Monday night.

I’m not sure these two need that same treatment – especially given that Rusev is still being billed as a monster and a threat to United States Champion, John Cena. Do we really need the Lana side story added to this? I’m not sure we do. I wouldn’t mind something like this if, say, Rusev lost to Cena again at Payback, and Rusev and Lana hinted toward splitting permanently the night after on Raw. Sure, the two have had their on-air issues dating back to WrestleMania, but I still think it’s way too early for them to split. Is Lana going to become a major player in the Divas division? I sure hope so.

Rusev’s Payback opponent was given a more prominent position on the show, as John Cena’s United States Championship Open Challenge continued on Monday night. This edition of the open challenge may have garnered the greatest moment so far during this storyline, as former NXT Champion and Montreal native, Sami Zayn, was introduced to a thunderous ovation by Canadian hero, Bret “The Hitman” Hart before putting up a valiant effort against a future WWE Hall of Famer in a losing effort.

Sami Zayn just made everyone in the world's jaws drop with this move. (via @xmasape) http://t.co/wVp5ESYoVn pic.twitter.com/PgcZ5GjLhs

This goes to show that a wrestler doesn’t have to win in their hometown, but as long as they are booked strongly, the viewing audience will no doubt gain the utmost respect for them. Zayn proved that Monday night by not only kicking out of Cena’s finisher, but also wrestling with a “shoulder injury” he suffered during the match to make him seem even more valiant. That’s how WWE should book every new star that gets called up from NXT. It was perfect. What did other current and former WWE employees have to say about Zayn’s debut?

I couldn't be any happier or prouder of @iLikeSamiZayn.A true warrior of the canvas wars.

Goosebumps all over for this moment for @iLikeSamiZayn !!!!! #RawMontreal @WWE

This is a freakin dream match! #SAMIZAYN #RAW

Congrats @iLikeSamiZayn on a tough as nails debut. That is what #NeverGiveUp is all about. #Raw

And Zayn’s NXT rival even weighed in.

All these @WWENXT dorks tweeting how proud they are of Sami Zayn should have their Twitter accounts suspended.

So, yeah, something tells me we’ll see Zayn again on the main roster very, very soon.

Ryback was given some mic time to address Bray Wyatt on Monday night, and had some fun with it. The crowd chanted “Goldberg!” at him, as he bears a slight resemblance to the former WCW and World Heavyweight Champion, and he nipped it in the bud right away and eventually had the crowd on his side by the end of his promo. But then, Wyatt appeared on the Tron with his own promo. Follow the buzzards.

Are you tough enough? Here’s some of the “Best of” audition videos for WWE’s new season of Tough Enough.

Tamina Snuka returned to television and along with Naomi took out the Bella Twins. She should only make the Divas division better, and deserves to get a run with the Divas Championship.

And, yes, The New Day is still celebrating.

• Tyson Kidd and Cesaro d. The Ascension by pinfall via the double-team swing into a kick maneuver. Not sure if they have a name for that yet, but I’m pretty sure that’s their finisher.

• Non-Title: Dean Ambrose d. Seth Rollins by pinfall via rollup. Ambrose countered a rollup attempt from Rollins for the win. Ambrose is now in the main event of Payback.

• Rusev d. Fandango by submission via The Accolade.

• Stardust d. R-Truth by pinfall via rollup after R-Truth opened Stardust’s bag, revealing plastic spiders. Yup. You read that right. Too many rollup pins every week... getting really tired of it.

• King Barrett and Sheamus d. Neville and Dolph Ziggler by pinfall after Barrett nailed Neville with the Bull Hammer elbow.

• Randy Orton vs. Roman Reigns ended in a No Contest after The Authority attacked both superstars.