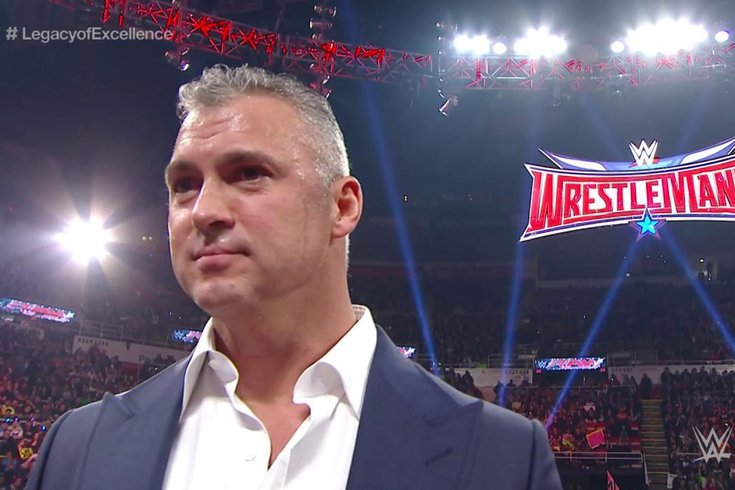 Shane McMahon returned to WWE on Monday night and was thrown right into a Hell in a Cell match at WrestleMania against The Undertaker.

One day removed from Fastlane, WWE invaded the Joe Louis Arena for Monday Night Raw. This was one of the bigger editions of Raw if only for the opening segment and how WrestleMania has already begun to take shape.

The program kicked off with the announcement of the first winner of the Vincent J. McMahon Legacy of Excellence Award. Vincent Kennedy McMahon made his way out to the ring and introduced his daughter, Stephanie, as the first recipient of the award. As the two stood in the ring and Stephanie was ready to graciously accept the award, an absolute bombshell was dropped.

Shane McMahon made his entrance to a thunderous ovation from the Detroit faithful. The crowd went through various chants before finally quieting down so Shane could talk, but it took at least five minutes for them to do so. Shane mentioned that Stephanie didn’t deserve the award. He also teased at how Stephanie “didn’t know” that Shane had helped his father through the years, continuing to finance WWE as business has been trending downward.

Shane said he wanted control of Monday Night Raw, so WWE might be teasing another brand split – which I would welcome with open arms – in the future. Vince said that Shane could have control of Raw is he won one match, as long as he got to pick the time, place and opponent. He picked WrestleMania 32 in Dallas and chose The Undertaker as Shane’s opponent. Oh, and Shane has to face him in a Hell in a Cell match. Almost impossible, right?

Let’s think for a second at how this makes sense. It really doesn’t. But it’ll get people talking, and it’ll create a fantastic visual for this event. Shane is a bump machine as he showed many a time when he performed in the ring, so I’m more excited about this than most probably are. And I don’t think there’s a chance Shane loses this match, and that would render The Undertaker’s WrestleMania record at 22-2. Two losses to Brock Lesnar and … Shane McMahon. Wow.

Another big angle took place on the show, this time at the end of the program. Roman Reigns was forced into a match against Sheamus in the main event, and Sheamus was going to have all of his buddies from the League of Nations around to watch his back. Actually, after a commercial break, we found out the referee sent them to the back, so I guess that entire build was all for naught.

During the main event, Triple H’s music hit and he came out with his championship in jeans, a T-shirt and his leather jacket. All that was missing was his sledgehammer – and I think we’re going to see it eventually, by the way. H and Reigns brawled throughout ringside before Reigns got busted wide open somehow. Referees and medical personnel ran down to ringside, but H wasn’t done, and he pedigreed Reigns right into the steel steps, much to the delight of the fans in attendance. He held his title high with Reigns’ blood all over him as the program left the air.

The inherent problem is this – people cheered H and booed Reigns during this segment. It’s going to keep happening unless they start booking Reigns like they did in that miraculous 24-hour period in December during TLC and Monday Night Raw in Philly the night after. Many people think Reigns is done for and there can be no saving his character. The powers that be can always save a character in pro wrestling, pretty much because they have all the power. It can happen. I’m not counting Reigns out yet. Let’s see where they go from here.

Brock Lesnar and Paul Heyman addressed the Beast’s attack on Dean Ambrose in the parking lot from earlier Monday during an in-ring promo on Monday night. Heyman said that Lesnar’s attack on Ambrose left him unable to compete at WrestleMania. Not so fast, Paulie…

Ambrose drove the ambulance into the arena, neck brace intact, and went to the ring only to have Lesnar step on him and head backstage. Ambrose grabbed a mic and challenged the Beast to a No Holds Barred Street Fight at WrestleMania – to which Lesnar promptly gave him an F5 on the outside of the ring. Heyman accepted the challenge on behalf of his client.

Ryback left his team of Big Show and Kane high and dry during another six-man tag match, this time allowing Bray Wyatt to capitalize and get the win for the Wyatt Family. Ryback said that he has nothing against Kane or Show, but it’s time for him to focus on himself and to break the glass ceiling and take the brass ring. Whether he’s heel or face at this point is anyone’s guess.

Is the feud between Styles and Jericho over? Or is this a beginning of a new tag team? For Styles’ sake, I surely hope not.

It sounds like Charlotte’s next opponent for her Divas Championship will be either Becky Lynch or Sasha Banks. Or both.

The current rumor floating around is that WrestleMania 32 will feature a Triple Threat Match with both Becky and Sasha vying for the Divas title against Charlotte. I don’t think you can do much better than that, so look for some kind of disqualification, draw or false finish whenever Becky and Sasha get their hands on each other.

The Godfather is the latest induction into the WWE Hall of Fame. He joins Sting as the first two inductees that have been announced for the Class of 2016.

• The New Day d. Neville and the Lucha Dragons by pinfall after Kingston hit Sin Cara with Trouble in Paradise.

• The Usos d. The Ascension by pinfall after Jey Uso hit the big splash on Viktor. The Dudley Boyz cut a promo on the Usos before the match and talked trash to them after the match on the ramp.

• AJ Styles and Chris Jericho d. Curtis Axel and Heath Slater by submission after Jericho locked in the Walls of Jericho on Axel.

• Six-Man Tag: The Wyatt Family d. Big Show/Kane/Ryback by pinfall after Wyatt hit Sister Abigail on Kane. Ryback walked out of the match.