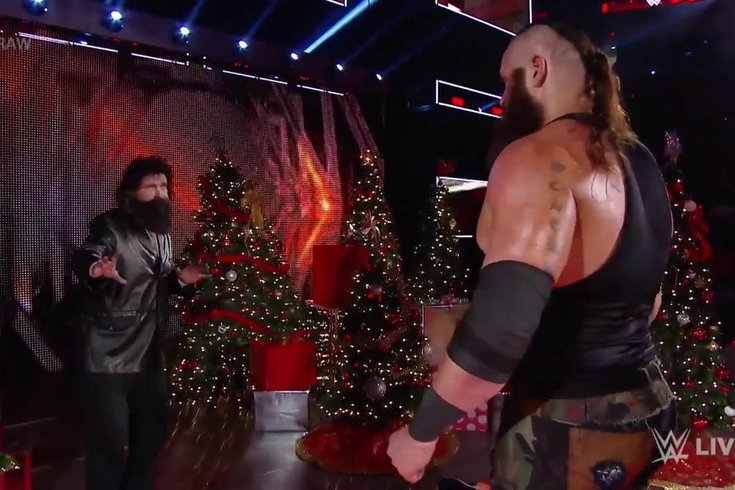 Mick Foley tried to stop the destruction by Braun Strowman, but didn’t have much luck on Monday night.

Twenty-four hours after a decent Roadblock: End of the Line pay-per-view, the superstars of Raw headed to Columbus, Ohio in the Schottenstein Center on the campus of Ohio State University for Monday Night Raw. What’s next for the WWE Universal Championship? And what would the holiday edition of Raw have in store for the WWE Universe as we head to the Royal Rumble?

The show opened with the WWE Universal Champion Kevin Owens and his still best friend forever, Chris Jericho, in the ring. Jericho said it pained him to give Owens The Codebreaker at Roadblock: End of the Line in order to have Roman Reigns disqualified so Owens could keep the championship. He then promptly put Santa Claus on The List, causing the Raw general manager to make his way to the ring.

And Mick Foley took care of some business. He booked Owens and Jericho in a tag team match in the main event against Seth Rollins and Roman Reigns. He also booked a rematch between Owens and Reigns for the WWE Universal Championship for the Royal Rumble next month in San Antonio. But he made sure to handle any possible Jericho interference, putting him in a shark cage hanging high above the ring.

If Jericho refused to go into the cage for the match, Foley said he’d essentially fire him. He then demonstrated how it worked, locking Jericho and then raising the cage, much to his dismay.

Main event marred by a monster

Even though the four biggest names on Raw headlined the show in a tag team match, it was someone else who stole the headlines abruptly during Monday’s main event. Hot off a loss [apparently, anyway] to Sami Zayn at Roadblock: End of the Line, BraunStrowman wanted some revenge. He searched for Foley backstage demanding Zayn, “or else.”

It became “or else” for the monster. He destroyed Sin Cara and Titus O’Neil, who were unable to begin their random match in the middle of the program, but Strowman wasn’t done there. He attacked both Reigns and Rollins during the main event and completely dismantled them, sending a clear message to Foley and also cementing his status as one of Raw’s top guys.

A new contender for Charlotte Flair

Charlotte Flair, now a four-time Women’s Champion in WWE on the main roster, wanted some new competition after defeating Sasha Banks at Roadblock: End of the Line in sudden death during their Iron Man Match. And Bayley answered the call.

EXCLUSIVE: "If this was for the championship...you'd be talking to the NEW #RAW #WomensChampion right now!" - @itsBayleyWWE pic.twitter.com/1q8JIniVCd

In a rather unsurprising move, Bayley cemented herself pretty much as the new No. 1 contender to Flair’s title after pinning her with a backslide during a non-title match on Monday night.

Where does this leave Banks? She came out for a promo on crutches and a knee brace and was met by Nia Jax. So that’s where that’s going. Jax kicked Banks’ crutch and then threw her across the ring, damaging Banks’ knee even more. I’m interested to see how this series of matches turns out, because Jax could absolutely be a future Raw Women’s Champion.

The Raw general manager congratulated both Cesaro and Sheamus for winning the Raw Tag Team Championships on Sunday night by introducing new Raw Tag Team Title belts, complete with silver plates and a red leather strap. I’m really digging how they’re making the titles on both Raw and SmackDown look similar, just with their own tint of red and blue, respectively.

Due to, um, “exposing” himself a few weeks ago on Raw backstage after Cass took his clothes as a joke, Enzo Amore received a letter backstage saying he had to undergo sensitivity training … that night. WWE’s HR department isn’t playing around. At least, not with Amore.

Amore joined a group consisting of Darren Young, Bob Backlund, Bo Dallas and Jinder Mahal. He couldn’t stop himself from hitting on the trainer, though. Rusev showed up and Mahal came back on the other side, and after quickly telling the trainer his Twitter handle, he was dismantled by both Rusev and Mahal. Lana came in and slapped Amore in the face and Rusev slammed him through a table. Man, can Amore sell or what?

Neville’s been healthy for a while, but he hasn’t been on television that much. Whether it’s because he was still low-key nursing his injury or the creative team didn’t have anything for him, we finally got to see a mean streak from him that we haven’t seen since his debut on the main roster. Sunday night, he attacked Rich Swann after he retained the WWE Cruiserweight Championship. On Monday night, Neville once again stood tall after he declared himself the King of the Cruiserweights. He took on both Swann and an arriving TJ Perkins to stand tall. Brian Kendrick came out and hit Sliced Bread No. 2 on Perkins.

Now this is a Cruiserweight angle I can get behind. I’d love to see Neville as the king of the division in the future. However, will people really boo him since his moveset is akin to that of, um, a babyface?

• Rusev d. Big Cass by disqualification after Cass wouldn’t break the referee’s five count and continued beating on Rusev in the corner.

• Cruiserweight match: Cedric Alexander w/ Alicia Fox d. Noam Dar by pinfall via the Lumbar Check. After the match, Dar said all he wants for Christmas is Fox. Great, another love angle. Just what the Cruiserweight division needs.

• Eight-Man Tag Match: The New Day/Cesaro/Sheamus d. Luke Gallows/Karl Anderson/Shining Stars by submission after Cesaro got Epico to tap out to The Sharpshooter.

• Titus O’Neil vs. Sin Cara ended in a No Contest after Braun Strowman came out and destroyed them.

• Non-Title: Bayley d. Charlotte Flair © by pinfall via a backslide.