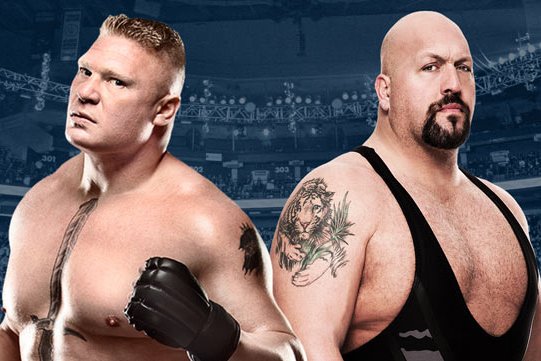 The First Niagara Center in Buffalo hosted Raw on Monday night, and some of the show felt like a go-home show to a pay-per-view. It felt that way simply because the event from Madison Square Garden this coming Saturday will be broadcast live on the WWE Network, so they pushed that show a lot on this episode of Raw.

Part of that advertising included a Paul Heyman promo, which is always a good thing. Big Show would come out and confront him. Despite Big Show really not doing much, the company has done a good job in promoting this match, even though its implications are relatively invisible. It has a big match feel to it. If we can suspend our disbelief about how badly Big Show’s last couple years have gone, this may be one of the more entertaining matches of recent memory.

I’m not complaining. This is how the WWE Network should have been utilized in the first place when it debuted in February 2014. Showing live events such as the upcoming MSG show and the Beast in the East show from Japan this past July 4th should be commonplace now on the Network.

With Brock Lesnar advertised for this Saturday’s show, going one-on-one with Big Show, it’s clear WWE is trying new ideas to try to bump subscription numbers. If it continues doing this, it’ll only end in higher subscription numbers and will surely make Vince McMahon happy.

Buffalo Bills offensive lineman Richie Incognito wasn’t incognito to the television cameras, and he made sure everyone knew it.

Here’s the current card, according to MSG’s official website, for Saturday night’s live event, which is being billed as Lesnar’s Go to Hell Tour. As always, the card is subject to change:

"You might as well call us Scrooge McDuck ... because we're gonna be SWIMMING in GOLD!" - @TrueKofi #RAW #DuckTales pic.twitter.com/ltHNlPVktz

Gotta love an episode of Raw that starts off with The New Day in a promo war with John Cena. Xavier Woods would answer Cena’s challenge, but not until the trio would once again drop some epic promo work on the U.S. Champion.

The United States Championship Open Challenge turned into a Six-Man Tag Team match when Kofi Kingston and Big E came down after being banished from ringside to attack Cena. Cena, who was looking like he was going to gain a win over Xavier Woods in his title defense, tried fighting off the trio before the Dudley Boyz arrived.

During a commercial break, Kane made a match pitting each side against each other, and the hottest act in WWE got the win after a failed attempt at the 3D by the Dudleys.

Speaking of Kane, he was under supervision by Human Resources for less than two hours, and that seemed to be enough time for the HR representative, named Ashley, to make her decision on Kane’s employment future. But before she could do that, Seth Rollins emerged and showed the audience a video package highlighting the times Kane wasn’t too great of a director of operations to him, and Kane responded with his own video package of Rollins being a big, bad bully to him, including the attack on him moments after Lesnar destroyed his leg months ago.

According to Ashley, Kane is “sound of mind” and “more than capable of fulfilling his duties as director of operations.” She goes on to say Kane is “professional, kind, helpful and thoughtful and far from a menace.” Ashley described Kane as the perfect WWE employee. Ashley would then describe Rollins as a “rude, cruel, petty, narcissistic and paranoid” employee and the “single-most unprofessional person” she’s ever met in WWE.

Rollins got in the ring and while admonishing Kane, dropped the WWE World Heavyweight title between them.

Kane tried picking up the title, but ran into a mega-aggressive Rollins not holding anything back. After giving Kane an awkward looking pedigree, Rollins completely destroyed him with a steel chair. He then hooked the chair up to his previously injured ankle and stomped on it.

Kane would be stretchered out to an ambulance, where he would become Demon Kane and re-emerge, shaking off the leg injury like it was nothing and stalking his way to the ring. He wound up laying out Rollins and held up the WWE World Heavyweight Championship.

Many people on social media have mixed reactions about this segment. I, for one, enjoyed it until the very end. I thought it ran way too long, but the story that was told made sense. I would have had Kane off television for a week or two, but I would’ve done everything else the same way. I like the aggressiveness Rollins showed in trying to get rid of those mind games, and he looked really impressive in doing so. Yeah, it’s Kane, but Rollins looked dominant in destroying him.

Of course, against Demon Kane, Rollins didn’t look so good. But that’s to be expected when building a feud. It was just weird seeing him so dominant and then five minutes later the same person he destroyed was able to destroy him. There will be a lot of divisiveness over this, for sure.

The Divas Champion, Charlotte, and Nikki Bella utilized Miz TV to further their feud on Monday night. With a virtual invisible appearance by Miz, Charlotte and Becky stole the limelight before Nikki tried taking some of it back by interrupting them. Charlotte really showed some fire and passion in her promo, which is way more than she’s shown to this point.

Paige interrupted the war of words and took full credit for the Divas Revolution. Despite not seeing eye to eye with the two women she aligned herself with over the summer, the former two-time Divas Champion helped Charlotte and Becky attack the Bellas and Alicia Fox. This set up a Six-Diva Tag Team match, which didn’t feel at all like the same thing we saw in the beginning of the program with Cena, the Dudleys and New Day.

Paige decided to leave her team after Charlotte was bumped into her, with Natalya coming out to seemingly take her place instead of leaving Charlotte and Becky alone. Paige attacked Natalya, and this distracted Charlotte, who fell into a Rack Attack by Nikki. Granted, she just stood there as Nikki was ready to put it on her, but whatever. A little attempt at a counter would’ve been nice.

King Barrett is back! Let’s see if he’ll continue being the jobber he’s been for the last few months. I sure hope not.

In the random segment of the night, Kevin Owens and Rusev were set to face each other in a non-title match, but the match barely got started as the two wound up on the outside of the ring and both attacked Ryback, who was on color commentary, after Owens threw Rusev into him. Ziggler would make the save and take out Rusev and make Owens head backstage. Good spot for your Intercontinental Champion, eh?

Oh, and the main event. Roman Reigns vs. Bray Wyatt. That was … something. Something weird. I’m still not sure how I feel about that ending, with Reigns spearing Wyatt through an announce table after a double countout finish. I liked the action. This clearly isn’t the end between the two of them. I guess we’ll wait and see when they try and top that one.

• United States Championship Open Challenge: John Cena (c) d. Xavier Woods by disqualification after The New Day, who was banned from ringside in the opening moments of the match, returned to the ring to attack Cena. The Dudley Boyz came out and attacked New Day, setting up the next match.

• Six-Man Tag Match: The New Day d. Cena and the Dudleys by pinfall when Kingston hit D’Von with Trouble in Paradise.

• Six-Diva Tag Match: Nikki, Brie and Alicia Fox d. Paige, Charlotte and Becky Lynch by pinfall after Nikki hit Charlotte with the Rack Attack for the win. Paige left the ring, Natalya came down to take her place, and Paige attacked her, distracting Charlotte.

• Randy Orton d. Bo Dallas by pinfall via the RKO.

• Non-Title: Kevin Owens (c) vs. Rusev ended in a No Contest after both guys attacked Ryback on the outside of the ring.

• Roman Reigns vs. Bray Wyatt ended in a double countout. The two fought all over the arena, and the show went off the air after Reigns speared Wyatt through the announce table.