WWE SmackDown rundown: Ambrose vs. Owens for the IC Title in the USA Network debut 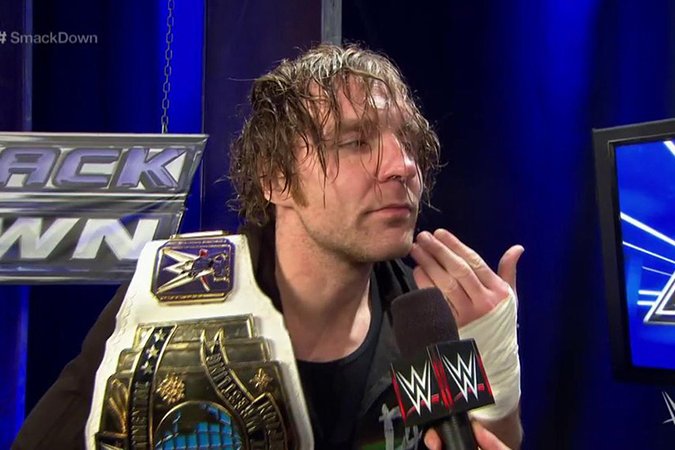 Dean Ambrose gets ready for his Intercontinental Championship defense against Kevin Owens on Thursday night.

The first edition of SmackDown on its permanent new network featured two heavyweight championship matches Thursday night. 8:00 p.m. was the time and Laredo Energy Arena in Laredo, T.X. was the place for the hopeful beginning of the turnaround for a toiling brand for WWE, as SmackDown ratings have suffered since being broadcast on the SyFy channel the last few years.

But WWE came out swinging on their official debut of SmackDown on the USA Network, with the Divas Championship and Intercontinental Championship both on the line in some pretty good matches. But there was really nothing earth-shattering that happened on Thursday night – though I was thoroughly excited to find out that the Stone Cold Podcast with Ric Flair will air on the WWE Network on Monday night after Raw goes off the air. That ought to be good.

Thursday night also marked the WWE commentary debut of Mauro Ranallo. Ranallo has been broadcasting for over 30 years, calling events in the boxing, kickboxing, mixed martial arts, football, hockey and professional wrestling worlds. His track record is fantastic and listening to him call a match is unlike any other WWE commentator at this point. And that’s a great thing.

Here are the main stories coming out of the first edition of SmackDown on the USA Network:

Kalisto may have earned a title shot

John Cena opened the show with a promo welcoming us to what doesn’t really feel all that different of a SmackDown. He calls out Alberto Del Rio because he wants another shot at his United States Championship, but Del Rio says he isn’t going to put the title on the line, and he doesn’t want to wrestle Cena, but he’d wrestle anyone else in the back. How convenient.

Of course, no mention was made of Cena and his shoulder surgery because this show was taped on Tuesday, so I’m assuming we’ll hear something on Raw regarding Cena’s status. According to all reports, he won’t be wrestling at WrestleMania 32, and might not even be able to make an appearance.

Cena introduced a guy he became a cheerleader for during the match, one half of the Lucha Dragons, Kalisto. Kalisto has really come into his own as of late, and with his partner, Sin Cara, being out with a dislocated shoulder for the time being, there’s nowhere for Kalisto to go but up.

After a fantastic opening match between Del Rio and Kalisto, the Lucha Dragon was able to pin the United States Champion with a hurricanrana after reversing Del Rio’s cross armbreaker attempt, likely earning himself a title match at an upcoming Raw, SmackDown, or maybe even at the Royal Rumble. He and Cena celebrated in the isle, and there was no sign of the League of Nations.

Ambrose and Owens aren’t finished with each other yet

The promos to build up to the Intercontinental Championship match on Thursday night were great, especially when Kevin Owens only gave Renee Young a minute of his time… and kept checking her watch.

But the match between Ambrose and Owens didn’t have a winner because both men were counted out of the ring. This means they likely will wrestle again in a match, which should be at the Royal Rumble pay-per-view for the Intercontinental Championship again. I wouldn’t mind Owens winning back the title, but this feud right now is probably the best one in the company right now. Owens is fantastic on the mic and Ambrose is as popular as ever. This could be a future WWE World Heavyweight Championship feud if these two get moved up to the main event where they belong.

Charlotte defended her Divas Championship against Becky Lynch and we had a pretty good ending that gave us the visual of Lynch tapping out the champion, but Charlotte’s foot was on the rope, thus breaking the hold and rendering the tap out not legal. Lynch would argue with the referee and the champion took the opportunity to roll her up from behind and retain her title.

Now that we’ve seen the visual of Lynch defeating Charlotte, we can buy her beating her again. I don’t think this is the end between the two at all, and now with Charlotte as a full-fledged heel following her attack on Lynch after their match on Monday’s Raw, I think we’ll see a pretty good feud between the two that might take them past the Royal Rumble into Fastlane.

The Royal Rumble means no friends and only enemies

Miz TV featured the WWE World Tag Team Champions, New Day, Dolph Ziggler, Goldust, Neville – who wants Miz to cancel his show and to never, never, never talk again – all really talking about nothing. Unless you think the Royal Rumble match is something.

R-Truth made his way down to the ring with seemingly the only one having an agenda – to become the next United States Champion in the U.S. Open Challenge match.

Except there was no U.S. Open Challenge match. There was no Alberto Del Rio. And once R-Truth got wind of that, he wanted to know if there was an entry fee to the Royal Rumble match. I have to admit, I normally dislike comedic figures in pro wrestling because creative writing teams do not know how to book funny characters, but R-Truth is one of the best I’ve seen in a long time. Kudos to him.

• Non-Title: Kalisto d. Alberto Del Rio (c) by pinfall via a hurricanrana and hook of the legs.

• 8-Man Tag: Dolph Ziggler, Goldust, R-Truth and Neville d. The New Day and Miz by pinfall after Ziggler superkicks Miz. Ziggler attacked R-Truth and Goldust after the match, saying at the Royal Rumble, it’ll be every man for himself.