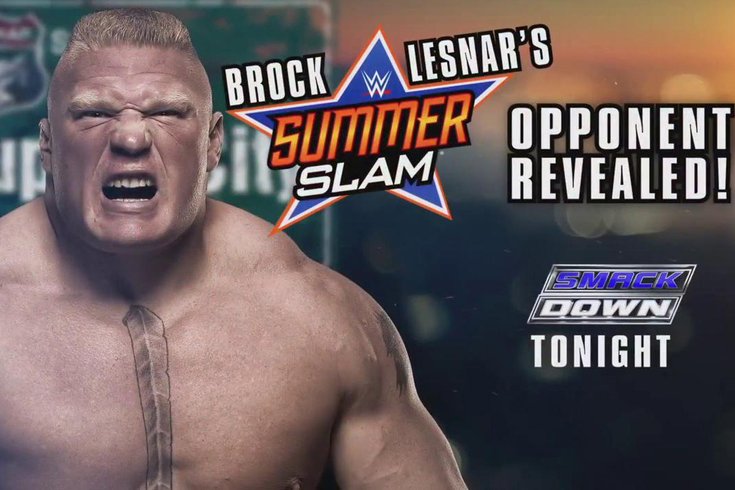 Brock Lesnar will meet Randy Orton at SummerSlam in August.

There are two episodes of SmackDown left before the show goes live and moves to Tuesdays at 8:00 P.M. ET on the USA Network. On Thursday night’s edition, we found out Brock Lesnar’s SummerSlam opponent as he prepares to head into battle at UFC 200 on Saturday night against Mark Hunt.

I’ll be watching UFC 200 on Saturday night and bring you a recap of Lesnar’s fight against Hunt.

As for Thursday night, WWE headed to the Huntington Center in Toledo, Ohio for SmackDown. This episode focused on the Kevin Owens/Sami Zayn feud, Ambrose and Rollins once again going at it verbally, and the continuation of Enzo Amore’s and Big Cass’ beef with The Club.

The Beast vs. The Viper

It'll be @BrockLesnar vs. #TheViper @RandyOrton this August at @WWE @SummerSlam at @BarclaysCenter! #SmackDown pic.twitter.com/miVH1lql1A

The return of Randy Orton to ring action will be against The Beast Incarnate on August 21st in Brooklyn. Before the main event, WWE announced Lesnar’s opponent will be Orton, who hasn’t wrestled since the end of 2015 as he’s been nursing a neck injury along with recuperating from shoulder surgery.

Lesnar will be coming off either a big high or a weak low from UFC 200, so it’ll be interesting to see how they build this match on television. It wouldn’t surprise me if they build this match on both Raw and SmackDown after the brand extension takes place on July 19th. I’m sure they’ll be keeping a close eye on UFC 200’s main event Saturday night.

Owens gets the last laugh on Zayn

Speaking of the main event, Sami Zayn took on Chris Jericho with Kevin Owens joining the commentary table. Zayn and Owens will have one “final battle” at Battleground, but the interaction backstage between Jericho and Owens before the match was fantastic.

Owens had Jericho’s infamous scarf around his neck and Y2J didn’t appreciate that. He demanded to have it back but it smelled like soup, so he wanted some money from Owens to go along with it so he could get it dry cleaned. Owens gave him a boatload of coins along with a Jolly Rancher.

JERICHO: "Stupid Idiot!"
OWENS: "I HEARD THAT!"
JERICHO: "You're SUPPOSED to!" #SmackDown pic.twitter.com/FXIt3T5zID

Love those Jolly Ranchers. I was jealous until Jericho threw it away as he was counting the coins. Why waste a good Jolly Rancher? It was an Apple-flavored one, too.

As for the match, Owens joined the commentary table and once again gave us gold. It’s no secret why WWE continues having Owens on commentary, because he’s fantastic. He threw Gatorade on Zayn after he hit the table in excitement after a dive to the outside on Jericho, and Zayn responded by shoving Jericho into Owens. He threw Jericho into the ring, where Y2J got the upper hand before Zayn countered a Walls of Jericho attempt and rolled him up for the win.

After the match, Jericho hit Zayn with the Codebreaker as he was celebrating the win, and then Owens ran in and attacked him. He hit Zayn with the Pop-Up Powerbomb and stood over his lifeless body as SmackDown left the air.

Ambrose gets another close-up of Rollins

In the beginning of the program, Jey Uso confronted Seth Rollins as he was walking into the building. Rollins made a comment about how families stick together and he thought The Usos would be hanging out with their suspended cousin, Roman Reigns. This led to the first match of the night with Rollins taking on Uso, but not before the WWE Champion made his presence felt.

DEAN: Will the owner of a white pick-up truck move your car ... you are parked in a fire lane! #SmackDown pic.twitter.com/DbiYx1YI3a

Dean Ambrose came out to do the ring announcements for Rollins and Uso and then stayed at ringside for the duration of the match. The Lunatic Fringe kept making comments during the match on the live microphone that everyone in the building could hear, and distracted Rollins as well with announcements such as visiting the WWE merchandise stand to buy Ambrose T-shirts and Rollins ice cream bars, which “taste like crap.” There was also a ’97 Ford truck that was parked in a fire lane, according to Ambrose, which distracted the former WWE World Heavyweight Champion, also.

Despite all the distraction Ambrose caused Rollins, The Architect was able to hit the Pedigree eventually on Uso for the win.

The Club clash with Enzo and Cass

On Raw Monday night, we saw Enzo Amore and Big Cass save the day for John Cena when The Club brutally beat him in the ring. Thursday, AJStyles and co. were looking for some payback.

Styles, Gallows and Anderson confronted Enzo and Cass and Styles challenged Amore to a match. He obliged.

With Cass, Gallows and Anderson all at ringside, this match was surprisingly clean with not much outside interference. Amore put on a good showing against Styles, but ultimately fell to the Styles Clash.

Xavier Woods sat down with Michael Cole for an exclusive WWE.com interview and said he wasn’t happy with how Big E and Kofi Kingston targeted the Wyatt Family. “I will be at the compound,” he said after noting he’d stand by his brothers.

Natalya attacked Becky Lynch while she was coming out for a match and locked in the Sharpshooter. The two women will face each other in a one-on-one match at Battleground.

• Seth Rollins d. Jey Uso by pinfall via the Pedigree. Dean Ambrose was at ringside during the match.

• Zack Ryder d. Sheamus by pinfall via an elbow drop off the top rope.

• AJ Styles d. Enzo Amore by pinfall via the Styles Clash. Big Cass along with Gallows and Anderson were at ringside for the match.

• Non-Title: The Miz (c-IC) d. Kalisto by pinfall via the Skull-Crushing Finale.

• Sami Zayn d. Chris Jericho by pinfall after countering the Walls of Jericho and rolling him up. Jericho and Owens, who was on commentary during the match, attacked Zayn after the match.