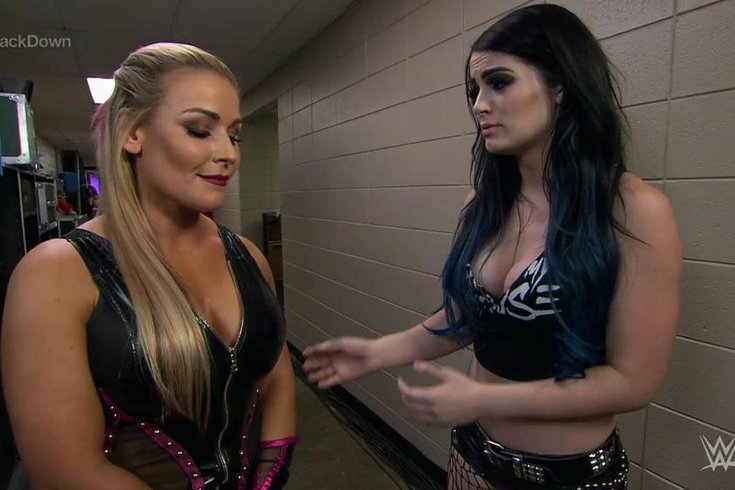 Paige apologized to Natalya, Charlotte and Becky Lynch on Thursday night, but was it all a ruse?

With Monday Night Raw this coming Monday being a huge go-home show to Hell in a Cell on October 25th, I wasn’t expecting much from SmackDown on Thursday. However, I was pleasantly surprised. This episode had a lot of matches and less focus on what happened on Raw, which is a good thing.

A big story of the night was Paige’s intentions, as she seemingly went from stoic, to apologetic, to heroic, to sneaky. What’s her deal? Are we supposed to cheer her now? Boo her? Not care? Who knows.

Here are some of the main stories coming out of SmackDown:

After Paige’s amazing promo on Charlotte a few weeks ago, she’s been made to look like a fool. On Thursday, she confronted Natalya and apologized to “her mentor” for her actions, but Natalya would have none of it and walked into her locker room without accepting the apology. Paige said she wanted things to be the way they were when she and Natalya were best friends. It looks like we’re going to get a crazy psycho Paige in the near future. Great, a women’s wrestling character we’ve never seen before! End sarcasm.

Paige would appear later in the show, staving off the Bellas and Alicia Fox from Charlotte and Becky Lynch. Backstage, she would apologize again and confirm Team PCB was back together. Natalya would then be found in her locker room, apparently attacked by somebody. Hmmm.

It’s all very confusing, but I’m assuming this leads to an even bigger heel turn for Paige. As if it means anything anymore. We don’t need this convoluted mess. It really does nothing for anybody involved. But nobody tell the creative team that.

Roman Reigns opened the show with a pretty easy squash of Bo Dallas. What’s interesting about this match is that Dallas is the real-life brother of Bray Wyatt, the man who Reigns will face inside the Hell in a Cell next Sunday. Reigns grabbed the mic after his win and said he’s seen pure evil in Wyatt’s eyes and the only way to stop the devil is to ride to hell. Wyatt made sure Reigns didn’t have the last word and came on the Tron, and said he’ll deliver a prophecy on Raw this Monday.

The New Day would end the program very strongly as they took out their challengers at Hell in a Cell, the Dudley Boyz, after getting disqualified in the main event. I’m enjoying the feud thus far, but it really hasn’t done much for the Dudleys. They’ll eventually have to win the Tag Team titles, but I’m not sure if that time should be now. Whoever beats The New Day for the titles should lose them to the Dudleys, and New Day should win them back from the Dudleys for a third time. Fantasy booking 101.

Just some of the damage #TheNewDay has caused to close out #SmackDown... pic.twitter.com/GlJwhl9X4t

Summer Rae was interviewed in a backstage segment before she was set to be the special referee in a Rusev vs. Dolph Ziggler match.

I'm backkkk! No more bun, no more Russians or Bulgarians...I'm free!😜👏 & I know my worth! #SelfRespect #AllAmerican pic.twitter.com/Y1MQhgm08p

If you’ve forgotten, or blocked out Raw, Rusev and Lana are now engaged in real life and WWE has used that as part of the storyline between Rusev and Summer Rae, portraying Rusev as a liar and cheater. Rae said it wasn’t the first time she’s put a man in his place and it won’t be the last, and said she can keep her personal and professional life separated. Whatever that means?

As one would expect, Rae cost Rusev the match and then tried to make up with Ziggler afterwards, but Ziggler wasn’t having it. He said Rae would use him and he isn’t into playing games.

In the Straight Shooters podcast on Thursday, I listed Cesaro as a negative from Raw this past Monday because I feel like he’s lost again. He had a good , albeit short, feud with Kevin Owens and lost decisively, and that’s fine. But now he’s toiling again in the midcard with nothing to do. What does the creative team do? Book the same exact tag team match from Raw on SmackDown, with Cesaro eating the pin this time around. It was pretty much the same ending with Neville and Cesaro’s roles reversed. The guy can’t catch a break. He might be better off in another organization at this point, or maybe even NXT.

• Roman Reigns d. Bo Dallas by pinfall via the spear.

• Sheamus and King Barrett d. Cesaro and Neville by pinfall after Barrett hit Cesaro with a Bull Hammer behind the ref’s back and Sheamus pins him.

• Non-Title: Kevin Owens (c-IC) d. Zack Ryder by pinfall via the Pop-up Powerbomb. Ryback comes out after the match, but Owens escapes.

• Dolph Ziggler d. Rusev by pinfall via a Zig Zag with Summer Rae as a special referre. Rae slapped Rusev during the match, allowing Ziggler to hit his finisher.

• Non-Title: Charlotte (c-Divas) d. Alicia Fox by submission via the Figure Eight. The Bellas attacked Charlotte and Becky Lynch after the match, but Paige came out for the save.

• The Dudley Boyz and Dean Ambrose d. The New Day (c) by disqualification after Xavier Woods hit Bubba Ray with his trombone.