WWE SmackDown: The Undertaker returns to send a message to Team SmackDown 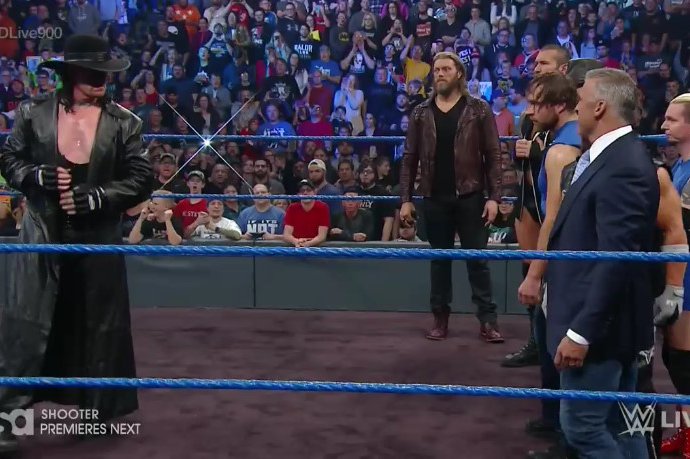 The Undertaker returned for the 900th episode of SmackDown to deliver a message to Team SmackDown before Survivor Series.

The 900th episode of SmackDown took place inside the Mohegan Sun Arena in Wilkes-Barre, Tuesday night, five days before Raw vs. SmackDown happens at Survivor Series. This actually might have been the better go-home show to Survivor Series because some things made more sense than others.

Seeing The Undertaker back and looking in pretty good physical shape is always good to see. He had a message for Team SmackDown, and we’ll get to that a little bit later. Now, let’s focus on the big stories coming out of Tuesday night:

One of the matches I’m looking forward to the most is the women’s traditional Survivor Series match. Monday night, the SmackDown men invaded Raw, and on Tuesday night, the Raw women invaded SmackDown. Fairly predictable storytelling, but it doesn’t make it any less awesome.

During the Nikki Bella vs. Carmella match, the Raw Women’s Champion, Charlotte, made her way down to ringside sporting a ticket that she seemingly paid for. But that wouldn’t allow her to just enjoy the evening’s event, because Bella had other ideas.

Unable to focus solely on her match with Carmella, Bella attacked Charlotte at ringside. The Raw Women’s Champion wasn’t without backup, however, as the rest of the Raw women [Sasha Banks, Bayley, Alicia Fox and Nia Jax] came out of the crowd to attack Bella. Carmella surveyed the scene and decided to jump in to try and help Bella, but she was overwhelmed by the Raw women.

Stories that make sense! Love it.

Somewhere in that brawl, Bella got her tooth busted.

The Cutting Edge brings out a motivational Undertaker

The men from Team SmackDown were guests on The Cutting Edge, including the team’s mascot, James Ellsworth. After WWE Hall of Famer, Edge, gathered all of them, he shook James Ellsworth’s hand, much to the chagrin of the WWE Champion, AJ Styles. Edge then confronted Randy Orton about suddenly being aligned with Bray Wyatt, but Orton didn’t speak. Wyatt said, “the Randy you once knew is dead.” I still fully expect Orton to turn on Wyatt during the match on Sunday.

Shane McMahon tried to rally the troops, but tensions escalated. That was, until a future WWE Hall of Famer made his return to SmackDown.

And, man, it never gets old watching his entrance.

Undertaker delivered what can only be described as a motivational speech to the SmackDown team. The message seemed to be that if they don’t deliver on Sunday, they’d have to answer to him. He said he’s back, taking souls and digging holes. Does that mean he’ll be wrestling more matches than just at WrestleMania as his career continues to wind down? Stay tuned.

I’d love to see an Edge/Ellsworth tag team, though.

In yet another rematch between Dolph Ziggler and The Miz, the two gave yet again another great match to the viewers. These two guys just have great chemistry and it gets better and better with every match they have. Maybe that’s why they wrestle against each other so much.

Unfortunately, the ending didn’t make a lick of sense to me. Despite my hopes of seeing a great Ziggler/Sami Zayn match on Sunday, I was robbed of that. The Miz, with help from Maryse, regained the Intercontinental Championship for the sixth time. During a Ziggler small package attempt, Maryse pushed Miz from the outside of the ring [yep, they were too close to the ropes for the referee to notice] to allow Miz’s momentum to carry him into his own pinning combination via small package and get the win.

There are so many illogical things about this. First, Maryse and any appearance from the Spirit Squad made zero sense given the last few matches Ziggler and Miz have had. The referees continue to look clueless. And no follow-up angle with Bryan or McMahon restarting the match?

Maybe Ziggler will be added to the match Sunday to make it a Triple Threat. Maybe. Who knows? I just don’t see the need to have Miz with another championship victory, especially if they decide to give Zayn the title Sunday, or keep it on SmackDown. Why give Ziggler the win at No Mercy just to take the title away from him just over a month later?

It makes no sense.

• WWE Intercontinental Championship: The Miz w/ Maryse d. Dolph Ziggler © by pinfall after Maryse pushed Miz into reversing a small package on Ziggler for the pin without the referee noticing.

• Nikki Bella vs. Carmella ended in a No Contest after Bella attacked Charlotte at ringside, who was merely a spectator with a ticket.